Kenyans On Twitter React To Lions On The Loose In Nairobi 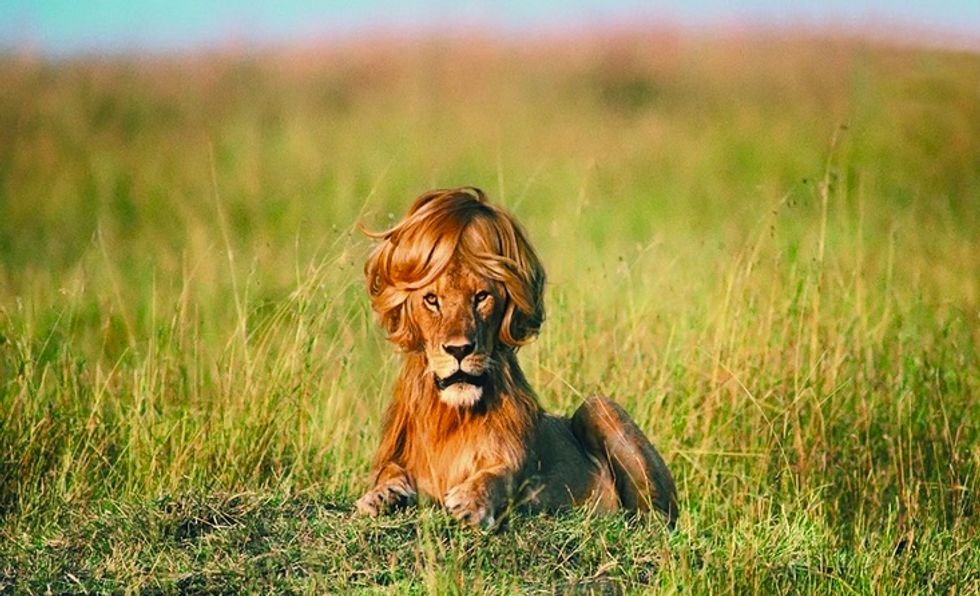 Six lions wandered through residential streets in Nairobi on Friday. Here's how Kenyans on Twitter reacted.

Meme of a lion with a wig, like the one tweeted out by Twitter user @Morgan_Jamie_ (Source: 7-themes.com)

As many as six lions were spotted wandering through residential streets in Nairobi last night. To be clear, the animals didn’t “escape” persay. Rather, they walked out of the Nairobi National Park, just a short six-mile walk from the city’s downtown. The park is mostly, but not entirely, enclosed.

The lions were spotted early Friday morning near a hospital in the suburb of Langata, and later near Kibera, AP reports. CNN says some members of the public reported seeing the lions in crowded residential areas.

The Kenya Wildlife Center sent in a search and rescue team. “Our team has been has been on ground since 3 am to ensure that the issue is contained and the Lions are safely back,” KWS tweeted. They also clarified the lions would not be harmed in the process: “NOT HUNTING as if to kill them. Lions are to be traced and returned to the park. Perils of 'born town' lions!”

Kenya Wildlife Center strategic communication strategist, Paul Udoto, updated his Twitter throughout the episode. He urged people to be vigilant and report any lion sightings to a toll free number. “Lions are dangerous wild animals. Don't confront them when you encounter them,” he tweeted.

Nelly Palmeris, a senior park warden at Nairobi National Park, tells the Washington Post the lions sneaked out through a culvert, likely while they were chasing a warthog. "People were just in panic,” Palmeris told the Post.

One lioness and her cubs were safely found and returned to the park. Two others are suspected to have wandered back on their own accord.

In the end, no humans nor lions were hurt. “Grateful for public cooperation. No incident reported over lions on the loose. All is well that ends well,” Udoto tweeted.

And as was the case with the “missing” Bronx Zoo Cobra of 2011, Twitter reacted swiftly and, in a number of cases, rather brilliantly.

Why are Kenyans worried about six lions in langata when we already have 290 hyenas in Parliament which is in the heart of Nairobi CBD....

Lions are natural enemies of hyenas and usually kill them on sight. Somebody please direct those lions to Parliament Road & Harambee Avenue. — Otieno (@mackio_) February 19, 2016

#Nairobi National Park. He he! This is hilarious. Eti mathrees were this morning charging ksh300 to & from Lang'ata for 'a game drive'.

#lionsontheloose I hope KWS get to the lions before the people do. Reporters should stop saying they escaped. The park isn't a zoo. Strayed

6 lions strolling in #Langata make headlines when team mafisi have been all over & not even a KWS memo got sent out.Discrimination is real

I'm planning to set up a lodge in my backyard for people to watch the annual lion migration from Rongai to Kenya thru #Langata.?