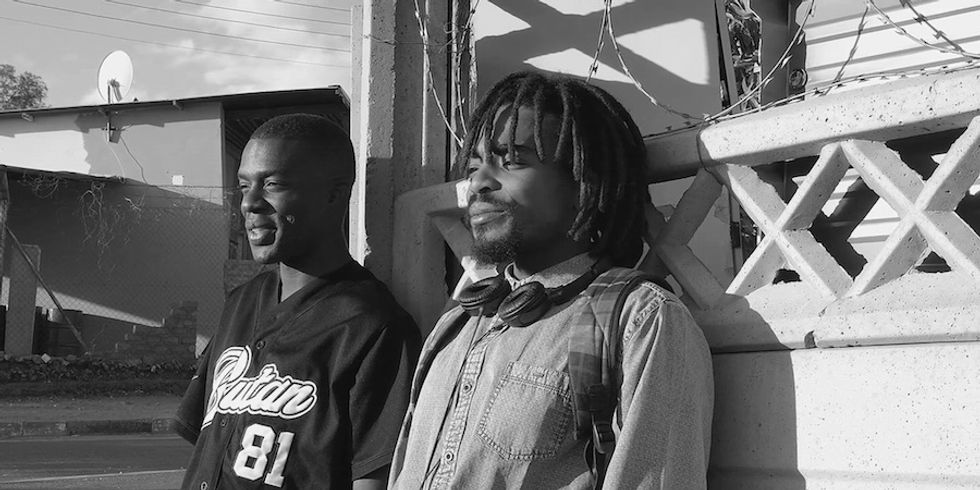 Perivi John Katjavivi's new film, The Unseen, is a collection of philosophical musings on what it means to be alive in independent Namibia.

Still from The Unseen. Courtesy of Perivi John Katjavivi.

The Unseen, written and directed by Perivi John Katjavivi, is the story of three young people as they navigate spaces, both emotionally and physically, in modern day post-colonial Namibia - spaces that are normally ‘unseen’. Katjavivi was born in Oxford, England to a Nambian father and English mother and moved to Namibia after the country's independence from South Africa in 1990. The Unseen is his first feature film.

"It’s a collection of philosophical musings on what it means to be alive in independent Namibia," Katjavivi writes in an email to Okayafrica.

The film blurs the line between documentary and fiction, skilfully exploring heavy issues of South African Apartheid, the legacy of German colonialism, post-colonialism and cultural appropriation. Katjavivi describes the project as a black French New Wave film. It recently had its premiere at the Pan African Film Festival in Los Angeles, California.

The stars of Unseen include Senga Brockerhoff, Matthew Ishitile, and Antonio David Lyons. It follows the interwoven stories of their characters as they traverse a myriad of emotions.

Brockerhoff, an accomplished actress who won the 2002 National Theater of Namibia's Best Actress Award for her role in Poppie Engelbrecht and served as Chairperson of the Filmmakers Association of Namibia, plays Sara, a rebel who has seen the world yet upon returning home finds emptiness.

Ishitile, a musician in his own right, plays Anu, a musician perched on cloud nine who has difficulty explaining the hallucinations he has begun experiencing to his homies.

Lyons, known for his roles in Hotel Rwanda, Scandal, 24, American History X and others, plays Marcus, an African-American actor on assignment in Nambia for an epic historical film. He is estranged from his wife and roams the outback struggling to find meaning and significance.

The Unseen is a movie that decidedly chooses to not engage or envelop its subject matter with the usual tropes of African films: poverty, war, child soldiers, HIV/AIDS, corrupt government officials. A press release describes the project as:

A side of African life that doesn't make the international news headlines, namely its young people, getting on with lives characterized by the kinds of things that vex twenty- somethings the world over – the stresses and pleasures of city-life, relationships, and struggling to accept and explore oneself. It is with this that I hope that audiences far and wide will embrace the non-generic treatment of his African story. We have three wandering souls, each being pulled and tugged in opposite directions. Somewhere in the middle is something beautiful, something terrifying, something unseen.

The Unseen is making its rounds at festival circuits. Up next is Oshakati in the North of Namibia followed by a screening at the Luxor African Film Festival in Egypt this March.

Watch the film's trailer below. The Unseen's director, Perivi John Katjavivi, is on Twitter at @oldlocationfilm.