Performances That Seek to Interrupt: Nigerian Artist Wura-Natasha Ogunji & The Craft of Spectacle 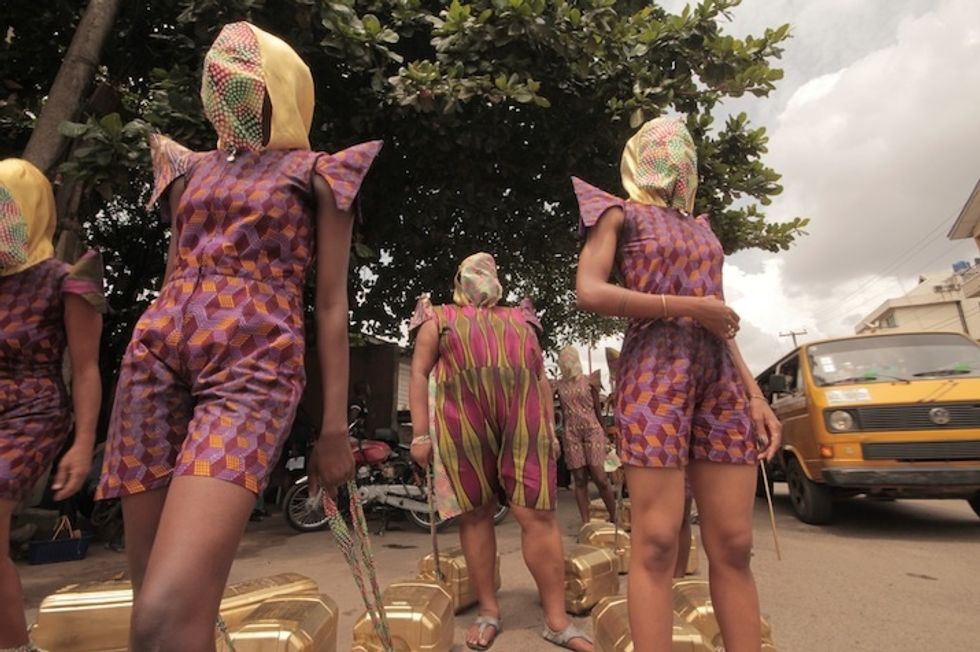 A profile and interview with Nigerian performance and visual artist Wura-Natasha Ogunji, which illuminates Ogunji's recent performances in Lagos, Nigeria.

Will I still carry water when I am a dead woman? Image credit: Ema Edosio

As they walk through the streets of Yaba in Lagos, Nigeria Wura-Natasha Ogunji and six women dressed in matching costumes and masks around their faces, carry kegs full of water that are strapped to their ankles. Catching the attention of those they pass on the street, Ogunji describes the thoughts racing through her mind at the time, "in that beginning moment i doubted so much. i had to remember the words i had spoken upstairs. trust, rest, trust. i learned so much in the first five minutes. walking required my entire body (were we actually even walking? it felt like something else)." However, this isn't the first time Ogunji has performed this act- in 2011 she crawled along the ground "with water kegs tied to [her ] ankles] inspired by the daily task of carrying water at [her] cousin's house." In collaboration with the Center for Contemporary Art Lagos (CCA), in Will I still carry water when I am a dead woman? Ogunji creates a spectacle out of the mundane by illuminating certain notions of women and space in Lagos.

In their performance, Ogunji and the other women are dressed in matching costumes (with an "Afrofuturistic touch") for more than just aesthetic appeal, rather Ogunji attempts to conjure images of the Egungun Masquerade, which women are not typically allowed to perform. In tradition during the Egungun masquerade the masked dancer is allowed to travel anywhere and they are protected (People are not even allowed to touch them); as such, Ogunji builds on the daily task of carrying water, by simultaneously "allowing women to occupy a sacred, dynamic, and public space" through their performance as masked water carriers. In her quest to evoke dynamics between labour and women, Will I still carry water when I am a dead woman? is one mere example of how Ogunji's work excavates the complexities of the relationship between women, society, space and politics.

Based in Austin and Lagos, Wura-Natasha Ogunji is "best know for her videos, in which she uses her own body to explore movement and mark-making across water, land and air." She has received a number of awards for her working including a John Simon Guggeinheim Memorial Foundation Fellowship (2012). If we think of performance art as art that "does" in the immediate, specifically in the space that it occurs, yet also has the capacity to travel in impact and medium as a consequence- then Ogunji's pieces aim to "do" in Lagos. We asked her a few questions about her recent work- her experiences carrying out these ambitious performances, the audience engagement and what she has coming up in the near future.

Conceived by Nicole Vlado and Wura-Natasha Ogunji, beauty explored the relationships that women have to each other and to their hair. The performers had their hair braided beginning at 2:00pm in this public transportation plaza and then stood with their hair connected until 6:00pm. Image credit: Ema Edioso

OKA: Performance art often involves creating a spectacle. Do you ever worry that people are more focused on the spectacle rather than the messages you're trying to convey?

Wura-Natasha Ogunji: I'm interested in creating a particular exchange between the performers and the audience.  This requires a kind of respect and consideration for the public which I don't at all associate with spectacles.  When I think about a spectacle it brings to mind a particular image or event that is intended to shock.  And things that shock us don't necessarily create opportunities for conversations or transformation.  I love this question you are asking because it really gets at the challenge of creating meaningful performance.

As an artist I am creating certain parameters and asking certain questions but I don't determine the answers and I certainly don't own the experience.  The collective is incredibly important to this process--be they audience members or performers or students trying performance for the first time or a bystander who participates.  I expect the audience to do some work, to ask questions, to figure some things out on their own.  People sometimes ask, what is this about?  And my first answer is always, what do you think it's about?  What did you see, feel and experience?

I have found people in Lagos to be very generous.  They ask questions.  They respect the performance and the performers.  They give a lot.  But they also require a lot because you can see crazy things here on a daily basis, in any moment.  I am very interested in interruptions and disorientation.  The fact that we are women occupying public space in unexpected ways is an immediate interruption.  I want people to stop to look because they are seeing something that calls their attention in a particular way--and not in a violent way.  A fight can stop traffic.  I want to interrupt someone's daily journey with something different.  I want people to stop, to witness, to comment on the work or ask questions because they feel drawn to it, pulled by it in a way that expands the imagination.

OKA: You mention that a lot of your work is done through your body as a way of understanding larger questions of how bodies engage with space.  Are you also addressing more abstract notions of space (diaspora) particularly as someone who lives in the U.S. and Nigeria?

WNO: Yes, absolutely.  My previous video and performance work definitely considered larger spaces of the diaspora.  I was particularly interested in the Atlantic as a site for memory, history, creativity.   The videos I made including 'The epic crossing of an Ife head' provided a way for me to explore this space between Africa and the Americas.   I began that series because I had a question about this relationship. I asked “Does homeland long for us?”  In answering that question I thought about the physical efforts that the Ife head would have to go through to find her descendents in the Americas.  In order to cross the Atlantic she must either fly or walk on water.  Taking on that persona of the Ife head I attempt to fly by jumping into the air.   I saw the physicality of that act as akin to the efforts required to make that connection across space which is really across that enormous ocean.  The journey is also about moving through one's history--both personal and collecitve.

Now that I am in Lagos my questions have, of course, changed.  I can say that homeland indeed longs for us which I understand to mean that there's a place for me here in this present moment.  And now my engagement with the body (both my own and others) is affected by this particular urban space in which I find myself.

OKA: What has the response been to your recent pieces, beauty and Will I still carry water when I am a dead woman?

WNO: People always have a lot of questions.  With beauty the five of us had our hair braided together and we stayed that way for four hours.  There were people who said we wouldn't make it, that we wouldn't last the four hours.  There was someone in the audience who talked about how this piece was for Nigerians.  I understood that to mean that the person not only felt a connection to the work but that they thought it had relevance to this place and people specifically.  My favorite response was a conversation with a young girl, perhaps she was 9 years old.  She asked why we had done the performance and then I spoke with her about the connections we have as women to our hair and the even more important connections we have to each other.  She understood that of course, she feels it too.

Will I still carry water when I am a dead woman? was different.  We were masked during the piece. I heard a lot of comments about our strength.  A friend told me that someone asked why we would be carrying water kegs through the streets if we were not getting paid.  There was also a woman who thought we were being punished and that the punishment was too harsh.  One of the performers, Wana Udobang wrote about how the piece brought into focus the ways in which we, as women, place burdens on ourselves and that in the end no one else even acknowledges our work, they stop even noticing our struggles.  She observed that by the end of the walk through town people began to almost ignore us as they went back to their daily lives.

OKA: Did you notice anything that your audience was doing while watching the performances that you found particularly interesting or even strange?

WNO: beauty was an incredible experience because we were in the middle of Obalende Motor Park.  Hundreds of people passed by during the four hours that we were performing.  They were watching us and we were watching them as intently.  As performers we all spoke about that experience.  We talked about even wanting to film the audience watching us.  It's an incredible feeling, to be witnessed in this particular way by strangers and to also be in a position to really take in another person's presence, someone you don't even know.

OKA: What projects do you have coming up in the future?

WNO: I'm in an exhibition with two other artists (Ruby Onyinyechi Amanze and Nnenna Okore) called 'No one belongs here more than you' which opens at the Centre for Contemporary Art, Lagos this June.  I will show a new video installation as well as documentation of the performance works.  I'm also creating a performance for the opening that draws from the tradition of bowing and prostration.