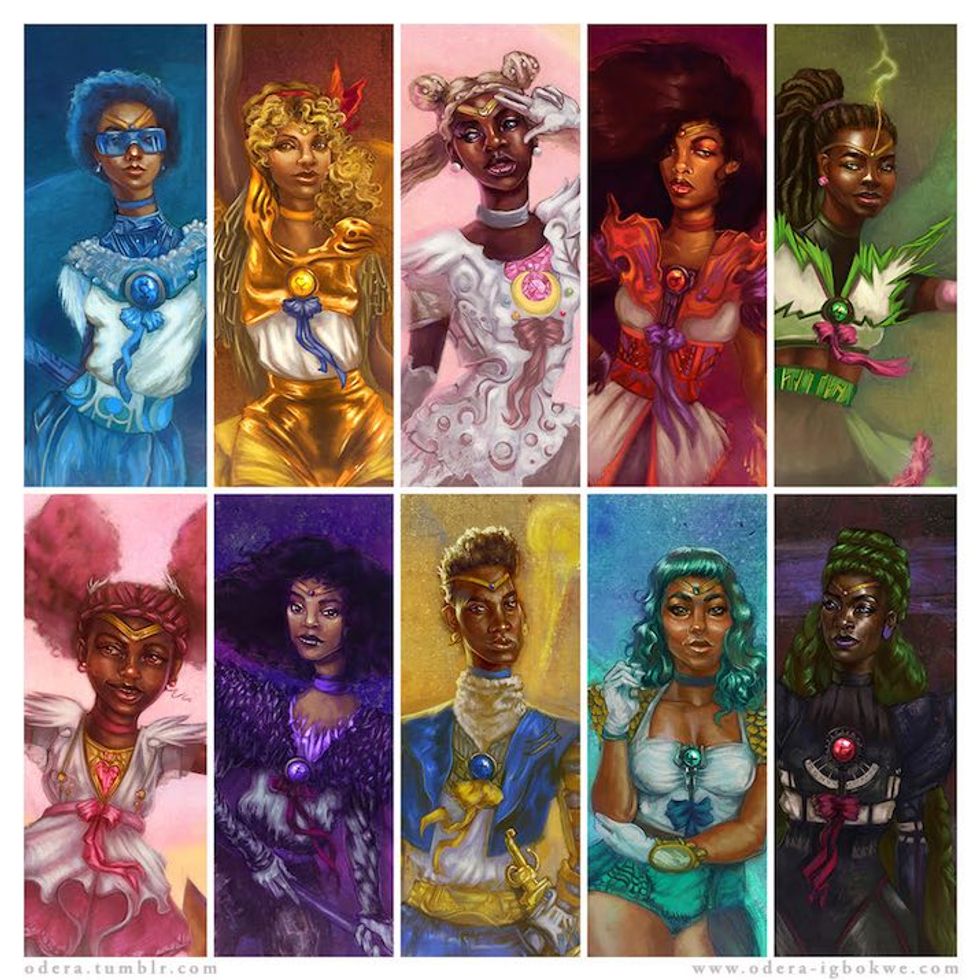 All images courtesy of Odera Igbokwe

Odera Igbokwe is a Nigerian-American illustrator who explores the intersection of identity and imagination through racebent character archetypes, Afro-diasporic mythologies and magical girl transformation sequences. The Brooklyn-based creative, who recently featured in our story on Mikael Owunna's Limit(less) photo series, tells us their work is also very much about celebrating the African diaspora and all its narratives, mythologies, and metaphysical memories.

"Sometimes it is as simple as seeing our people present and represented in the realm of fantasy art," the artist told us over e-mail. "As a child, the characters I drew were not black unless it was Storm from X-Men, or an actual real person. One day around the age of fifteen or so, I just noticed that none of these original fantasy characters I was drawing looked like me or my family. By the time I went to college, I unplugged myself from that system of white supremacy that allowed for none of my characters to be black."

The Maplewood, New Jersey native, who was raised as the youngest of five, spent nearly every childhood summer in Nigeria. "My parents took us back to Nigeria every single summer for more than fifteen years," Odera shared. "I remember being kind of miserable there but I've grown to value the lessons they taught me. It really forced me to delve into my imagination and always generate creative energies. Back then it was just playing lots of Crash Bandicoot and Final Fantasy 9, and learning Aaliyah dance routines with my sister."

"Femi Kuti's 'Beng Being Beng' and 'Stimela' by Hugh Masekela are some of my favorite songs of all time," Odera says. "All of these musicians stand out to me because of their position and perspectives in the African diaspora. It is just truly beautiful to see all these diverse expressions of blackness and African culture."

Odera's love for music, dance, and performance serve as creative fuel for their illustrated celebrations of the African diaspora. Their work includes depictions of Nigerian deities like Anyanwu and Shango, a series titled Vogue Knights, which casts the five elements of vogue dancing as different members of a sisterhood of Knights; and images inspired by the music of Erykah Badu, Dawn Richard and the Afrofuturistic music videos of Missy Elliott and Aaliyah.

When it comes to pushing the boundaries of the fantasy genre, Odera's biggest influences stem from two seemingly disparate sources--the popular Japanese manga series Sailor Moon and celebrated African-American science-fiction writer Octavia Butler. "Sailor Moon and Octavia Butler function as sacred text to me," Odera says. "The lessons I learn from them definitely help to set my moral compass."

Last year, Odera's work went viral after they released a series of illustrations that re-imagined the cast of Sailor Moon as women of the African diaspora. "There was a lot of internal struggle about casting and identity politics going on," Odera says of the Sailor Moon series. "What does it mean if Sailor Venus who is about love and beauty has blonde hair and lighter skin? Whatever. It doesn't matter. I will make the main character Sailor Moon have dark skin and long box braids. I think my favorite part of the project was just managing to show that all ten of these women can be black and completely themselves rather than be limited to a token."

As a freelance artist, Odera is currently working on art for card gaming companies, illustrations for a short story coming out later this year, and a number of zines and anthologies. "My friend Angelica Alzona and I are in the process of creating a zine, PEPPER BREATH! to commemorate the 15 year anniversary of Digimon Adventure," they said.

"Ever since I was a kid I've been disturbed by the trends of the fantasy genre to simply disregard and erase entire groups of people. There would be amazing world building that drew from rich cultures, but it was always very obvious whose fantasy we were celebrating and who was welcome to the table; who was allowed to exist dream, envision, and fantasize. So every time I start a new piece, I think to myself: You can create any fantasy to put out into the word, so this is your sacred time to express your vision. Be the change you want to see in the world. In the words of Janelle Monaé: 'I can make a change. I can start a fire.'"