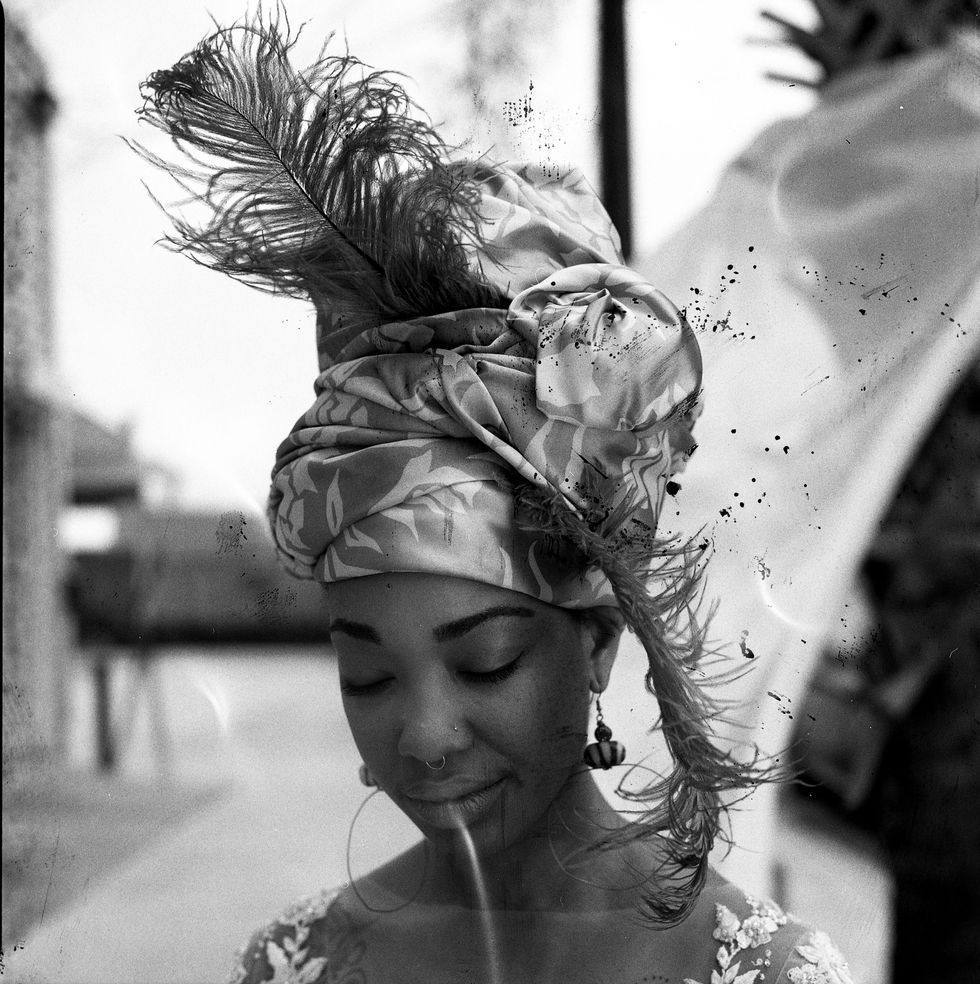 Juliana Kasumu’s centers her latest cultural investigation from behind the camera on the head wrap, tracing its origins from Senegal to New Orleans.

Last month, 60 students showed up to school wearing head wraps and dashikis at Gibbs High School in Florida in response to an incident where students were allegedly told their African head wraps violated the school’s dress code policy. Now their protest has become a weekly occurrence, using hashtag #BlackGirlsWrapWednesday.

“They are stripping us of our culture just like they did in slavery,” Liu Kwayera, a student at the school, tells Mic.

Building on photo series Irun Kiko on hair statements within the Yoruba culture in West Africa that received international acclaim, the Nigerian-British photographer presents Moussour to Tignon: The Evolution of the Head-Tie.

“Moussor' is actually what they call the head tie in Senegal, and 'tignon' is the name for the head tie in New Orleans, or Louisiana,” Kasumu explains."Moussor’, became influenced by Islam during the 17th-18th centuries, and how you saw that transformation from the fashions of the Senegalese, and the influence of them wearing their head coverings, and their dressings, and it adapting into what you see today.”

Part of Kasumu’s Olaju international artist-in-residence program, her beautiful black-and-white photographs are currently on display at the McKenna Museum of African-American Art in New Orleans until October 11 in an effort to bring to the forefront the underrepresented narratives from women of color.

Okayafrica spoke with the 2015 Renaissance Photography Prize winner for best single image to learn more about her creative direction in her latest photo project and overarching goal of reaching a larger audience of women sharing similar stories.

Kasumu describes the research and shooting process in New Orleans as a “very interesting spiritual journey” where she says she could “genuinely feel the spirits in the air sometimes.”

She explains that her passion for documenting Afro-textured hair practices grew from her own natural hair journey, and the frustration she felt when she realized the dearth of research and accurate historical records on West African hair methods, its symbolism, and its origins.

“That British-Nigerian-ness of me, I'm watching my mother, every weekend since I can remember, tying her gele with her friends, and they'd all come, and they'd do each other's hair,” Kasumu says. “And it was just this thing where when I started to adapt, and wear hair ties myself, it just became second nature. It's like a familiar kind of ritual that I didn't understand it to be as significant as it was until the last couple or years.”

Three-months of research conducted this summer guided by New Orleans icon and tignon expert Madame Barbara Trevigne, led Kasumu to an edict, not a law like it’s reported on the internet, put forth by Esteban Rodríguez Miró, a Spanish army officer and governor of the Spanish American provinces of Louisiana and Florida, that mandated Black women, both freed and enslaved, had to wear a head wrap so there could be racial classification among them. Apparently this was prompted by the jealousies of white women because a number of white soldiers who traveled to Louisiana had sexual relationships with Black women, which violated the Code Noir that regulated relationships between colonists and Blacks.

Kasumu points out, the edict flopped because Black women women rarely serve anything short of magical.

“They looked even more beautiful, and more appealing, and they used to decorate these head wraps with jewels, and plumes.They became more attractive if anything. It just backfired,” Kasumu says.

“The connections between the Senegalese, and the Afro-Creoles is just undeniable,” she continues. “One thing I want to take away from this [is] that people often say, that ‘New Orleans is the most African city in the states,’ and if you look all the way back, you see why.”

Her research traces the tignon back from the mammy archetype, noting that Afro-Creoles and sometimes even white women although it was frowned upon, wore head ties for practical reasons to protect their hair from vermin and heat damage to the Black arts movement where there was a resurgence of the head wrap and braiding methods again.

“It's interesting how history repeats itself. And so women, again, you [have] the natural hair movement, and you had this resurgence, and re-appreciation, and more importantly the re-appropriation of these hair methods.,” Kasumu tells Okayafrica.

As for cultural appropriation of the head wrap, Kasumu offers that there will always be people who don’t care that certain hair methods and hairstyles have a significant place in African history— “some people just use Blackness as a commodity for the sake of aesthetics, and trend” like Marc Jacobs at NYFW.

But for Africans who like to argue that African-Americans or Nigerian-British like herself are culturally appropriating when donning a head wrap or tie, Kasumu says not so fast as the culture flows both ways and no one should be shamed for seeking to reconnect with their African ancestry.

“We're all African. How can you appropriate something that is yours, or that was yours, and was taken away from you?”