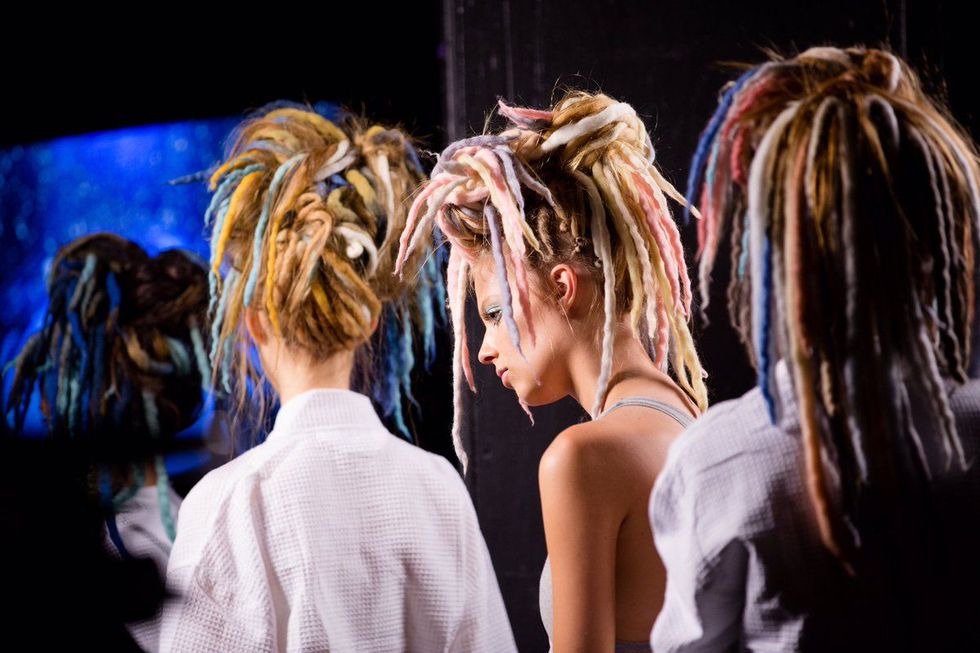 "For them, sporting locs down Jacobs’ runway is fun and edgy. For a black woman like me, it could cost me a job."

In 1992, American designer Marc Jacobs was lambasted by fashion media for a particularly ill-conceived grunge collection for Perry Ellis. Fast forward to 2016 and the designer is once again raising controversy, but this time it’s not for “self-conscious slovenliness,” as iconic fashion critic Cathy Horyn once described the hapless collection.

While the references to Harajuku culture, acid house and the rave scene were obvious in the styling—coquettish thigh-high socks, towering platform shoes and Lolita makeup—the need for faux locs confused many. Guido Palau, who styled hair looks for the show, told Harper’s Bazaar the colorful ‘dos were actually inspired by Lana Wachowski, the trans director behind franchises like The Matrix. Wachowski, who sports dyed locs, recently starred in one of Jacob’s campaigns.

As pictures of the presentation filtered onto social media many were quick to cry cultural appropriation, taking the designer to task for not recognizing how his inclusion of such a hairstyle was an insensitive reflection of white privilege.

@marcjacobs So, I guess this means POC can wear our locs freely now and not be blocked from a promotion or job in general?

Dreadlocks are part of black culture, something you have no business trying to sell or appropriate.

nah but honestly why did Marc Jacobs ruin his whole collection by doing white dreadlocks ?

*sits back and waits for my timeline to fall apart once they see Marc Jacobs is featuring a dreadlock only runway. pic.twitter.com/GvuQBu3fFb

Sensing the growing backlash, Jacobs took to Instagram to address his decision, stating, “and all who cry ‘cultural appropriation’ or whatever nonsense about about any race or skin color wearing their hair in any particular style or manner—funny how you don’t criticize women of color for straightening their hair. I respect and am inspired by people and how they look. I don’t see color or race—I see people…”

@marcjacobs response to cultural appropriation during his @NYFW 16 show. Your thoughts? pic.twitter.com/At4kLj1EGT

Unfortunately, Jacobs' knee-jerk defense did the opposite of displacing the blame; it rather perfectly illustrates why his inclusion of the hairstyle was an issue in the first place. The ability to move through a space without seeing color is a luxury that Jacobs can have as a white male. And while in his mind seeing people rather than color is no doubt noble, kind and decent, the reality is that it’s also a privilege. As long as certain demographics are not allowed to move through the same spaces without their color becoming a source of prejudice, it’s important for people like Jacobs see color, and acknowledge how it impacts the lives of others positively and negatively.

This same logic applies to his use of dreadlocks. Despite the global popularity of reggae music and mainstream fascination with Rastafarianism, for years, locs were considered a purely black hairstyle, despite having origins dating as far back as ancient Greece. As such, they were deemed unprofessional, dirty, and generally undesirable. Even today we still see the effects of the systematic ghettoizing of black hairstyles. Just last month in South Africa, a group of schoolgirls had to literally protest for the right to wear their hair in natural styles in the classroom.

What Jacobs needs to understand is that the dreadlocks aren’t the issue. The issue is that when he parades the likes of Bella and Gigi Hadid down the runway sporting a hairstyle that has traditionally been rejected when worn by people of color, it once again sets the precedence that white is right, and for many, that is hurtful. And, to add insult to injury, Jacobs compared having white models with dreadlocks in his show to women of color who straighten their hair.

This rather irresponsible juxtaposition ties back into Jacobs' proclamation that he doesn’t see color. If he did, perhaps he would recognize how the color he doesn’t see, and history, create two distinctly different narratives where black women straightening their hair and white people appropriating a “black” hairstyle are concerned.

For many women of color, straightening their hair is a passive act of assimilation, a response to the “white is right” precedent. When so many women of color are faced with everyday life situations where natural hairstyles are considered unprofessional or wrong by virtue of the fact they are different than white hair there is pressure to assimilate, a pressure that not a single one of those white models with dreadlocks have likely ever felt.

For them, sporting locs down Jacobs’ runway is fun and edgy. For a black woman like me, it could cost me a job.