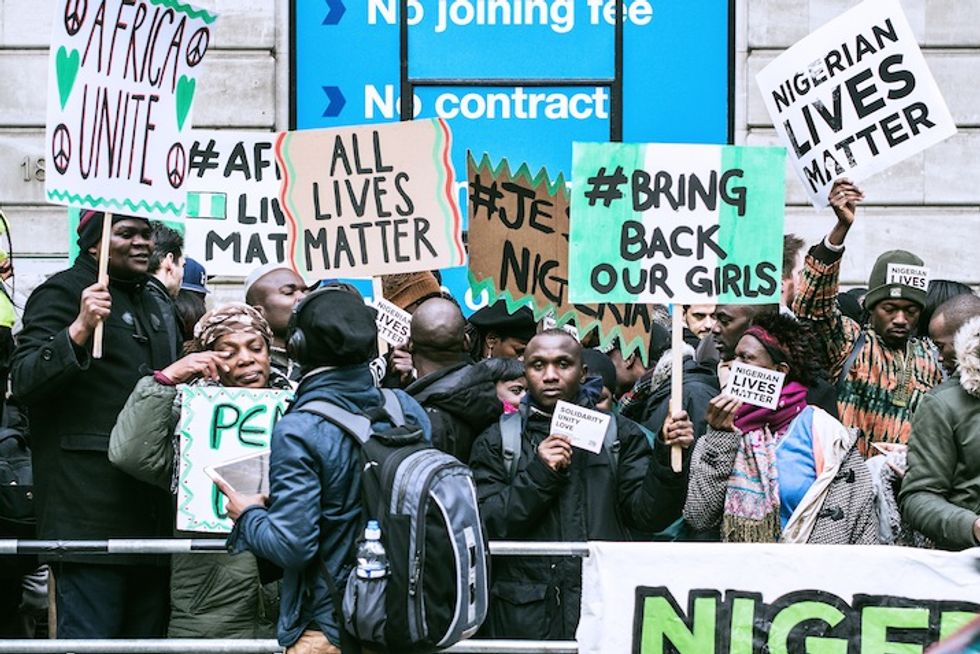 On January 25, a group of Londoners calling themselves 'Nigerian Lives Matter' rallied to hold the Nigerian government accountable.

All photos by Glenn Osei-Gyimah

On Sunday, January 25, hundreds of Londoners rallied outside the Nigerian embassy to demand justice for the victims of the recent tragedy in Baga. "We’re gathering to show solidarity with the thousands of innocent people who have died and the million who are hoping for a peaceful resolution," Nigerian Lives Matter organizer Akinola Davies Jr. wrote in an op-ed on Okayafrica last week. "We are asking the Nigerian government for a response; condemn the violence and prevent further loss of life. We want to show other Nigerians that we need to start taking ownership and standing together for what really matters, especially those members of our societies who are most vulnerable." Read below for thoughts from Davies Jr. on the success of Sunday's rally and what Nigerian Lives Matter is focused on going forward.

"The compelling words from our speakers, the support of our stewards and the chants of all those who attended on Sunday were an overwhelming display of a local and international community coming together. Poignantly, Nigerians of all ages led chanting throughout the rally and truly galvanised those gathered. Young people from different backgrounds mixed in with the older generation, combined in their enthusiasm to help out and be a part of what we were trying to achieve together.

We mobilised peacefully outside of the Nigerian High Commission to share a progressive rhetoric in an effort to hold our governments accountable. We acknowledged that our privilege could be used as an influential tool within the democratic process. We wanted to give a voice to Baga and the other communities that are now displaced as a result of the recent atrocities in Nigeria. The long-term outcome of these aims and the success of Sunday’s rally will ultimately be measured by how those displaced are accounted for and whether our governments play a part in that process.

Collectively, Nigerian Lives Matter is now focused on moving forward. As a result of the press coverage and the hundreds of like-minded individuals that came to stand beside us in London on Sunday, our network has grown substantially. Hopefully, this further strengthens our ability to affect change and directly help the citizens of Nigeria who need it most." –Akinola Davies Jr.