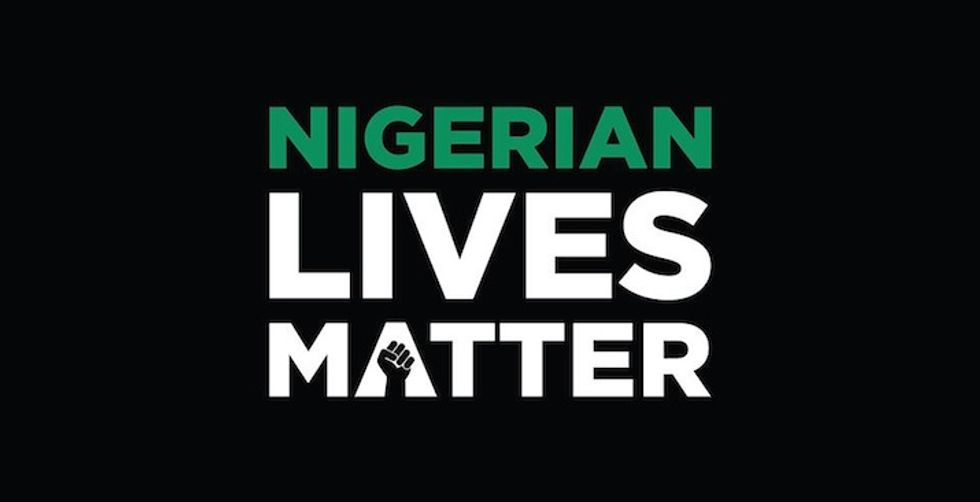 Nigerian Lives Matter organizer Akinola Davies Jr discusses why protestors will rally outside the Nigerian embassy in London on January 25.

A group of Londoners have organized a rally to take place outside the Nigerian embassy in London on Sunday, January 25. Below, Nigerian Lives Matter organizer Akinola Davies Jr discusses why they're protesting.

The first thing to say is that we've never previously organised a rally, of either political or humanitarian significance. We have no political affiliations and agendas, nor do we intend to have any. Our concern is the loss of life and the perceived lack of action surrounding what has happened recently in Nigeria. Some of us are Nigerians with dual citizenship; some only have British citizenship; and many others offering help are from different countries within Europe and Africa. We are all, however, undoubtedly proud of our heritages and very in touch with the political climate across Africa and, indeed, Europe.

What happened in France was atrocious. No nation or people should have to witness those events. The solidarity shown by the French public — people of all backgrounds, religions and races — was spectacular, both on the day of the events and in their aftermath. The gathering of world leaders, while certainly a great photo opportunity, was important to the families of the bereaved. It too showcased the magnitude of the world’s support.

It was symbolic to see an array of world leaders coming together to condemn violence and defend free speech. We just wish that something on any scale could have been done for the 2,000 people in Baga; the 17 who lost their lives to a child suicide bomber; the 200 girls who went missing and are yet to be recovered; the 5,000 refugees in a neighbouring town; the 7,000-10,000 who fled to the border, and ultimately the 800,000 people now displaced from the terror caused by the violence from the republics of Cameroon, Chad, Niger, and Nigeria. It’s important that people also show solidarity with the loss of lives from countries and communities farther away.

I'm nearly 30, have never been politically active, and have never voted. There are a huge number of people, like myself, who feel that we are not represented, both in the UK and Nigeria. The politics in practice do not resonate with our generation and there are seemingly no means, at least financially, to compete on their scale. Those in power need to be held accountable, and it's imperative that such massacres are, in the very least, publicly condemned and that the international community is made aware of what’s happening.

In an age in which we can organise a rally on Facebook, read tweets from those under siege in the Middle East and obtain satellite pictures of Baga, it is extremely disconcerting that we cannot even obtain accurate numbers of those who have perished in Nigeria. Furthermore, it is hard to find information about what is going on in Baga in regards to a humanitarian effort. This is why we are rallying. We want to make those affected know that their kin, thousands of miles away on this tiny island, actually care. Just as the French rallied in Paris, it’s paramount that action is taken to voice the discontent for Nigerians by Nigerians, accompanied by different nationalities.

Our motive in organising the rally on January 25 outside the Nigerian Embassy in London is to do something. To do anything. 5 people joined the event set up on Facebook, then 50 joined, and now, at the time of writing, the numbers have risen to 800+. This is still only a tiny fraction of the 88,000 Nigerians living in the UK (70,000 of which reside in London).

The constant stream of e-mails and messages we have received supporting the rally has been overwhelming. This is a cause that evidently resonates with many. We call on prominent members of society — those who are heralded and celebrated globally — to also show their solidarity. We'd love the support of those that have represented the best of what Nigeria has to offer. Renowned figures like Chimamanda Ngozi Adichie, Wole Soyinka, Femi and Seun Kuti, Chuka Umunna, Ben Okri, Bola Agbaje and many others. Unlike us, these people have an elevated platform and greater ability to pressure the government into action.

We're gathering to show solidarity with the thousands of innocent people who have died and the million who are hoping for a peaceful resolution. We are asking the Nigerian government for a response; condemn the violence and prevent further loss of life. We want to show other Nigerians that we need to start taking ownership and standing together for what really matters, especially those members of our societies who are most vulnerable. Whether they affect tens, hundreds, or thousands of innocent people, all human rights issues are important in Nigeria, especially when they concern the loss of lives.

We need to start speaking up on these sensitive issues and start engaging in progressive public discourse; challenging the perceived notion that there’s nothing that can be done. We need to garner the attention of the international community for the people in Baga and for those displaced and missing as a result of recent atrocities, many of who are women, children and the elderly. Igbo, Yoruba, Hausa and all in between, no matter what religion, we are all first and foremost Nigerian. Our collective values and culture as a nation are of increased significance in this time of national emergency.

On Sunday, January 25, whether there are 20 people or 1,000 people with us at the rally in London, we want all those suffering this violence, thousands of miles away, to know we are speaking up for them.

Nigerian Lives Matter is a group of individuals assembled to affect change and create informed awareness. Their aim is to show the diaspora that solidarity through mobilisation can hopefully help shed light on matters concerning innocent people and the loss of life by acts of terror.

Akinola Davies Jr is a London-born videographer who produces live broadcast events and web-based content. He co-owns dontwatchthat.tv and works as a content manager for Dailymotion.