From Lagos to the Bronx, Photographer Osaretin Ugiagbe Documents the In-Between 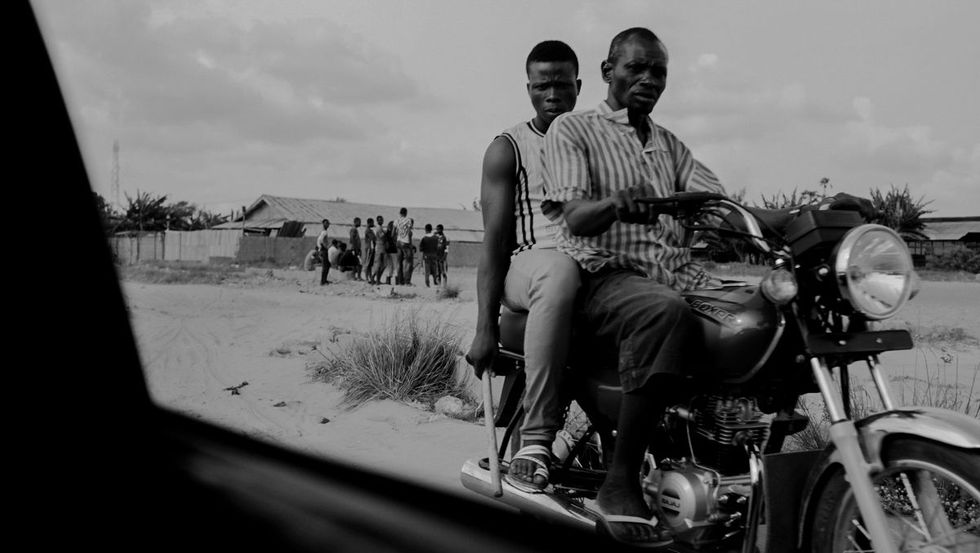 DIASPORA—Fifteen years ago, Osaretin Ugiagbe left the sprawling metropolis of Lagos, Nigeria, for the South Bronx in New York City. Unbeknownst to the immigrant teenager, his new home was infamous for high levels of poverty and unemployment. But the neighborhood intrigued young Ugiagbe—particularly the working elevator that led to his father’s studio apartment where he, his four siblings and his mum lived for a year.

In a bid to fit in at school and claim his new home, he asked friends and classmates to call him by his middle name, Charles, but that didn’t stop him from having to constantly explain himself. His accent often betrayed his otherness. “A lot of people would ask me 'where are you from?'”

Ugiagbe found solace from this displacement through art, painting and photography.

“Painting came first,” he told the audience gathered at the opening reception of his exhibit, Unbelonging at the Bronx Documentary Center on July 8th. The thirty black-and-white photos—taken in Lagos and Edo, Nigeria, and the South Bronx—depict themes of dislocation, loneliness and an urgency to assert one’s self. As the exhibit’s name suggests, the show illustrates Ugiagbe’s struggle for cultural identity and a longing for a place to call home. He felt like an outsider in both worlds: as the strangely accented West African immigrant in the U.S. and the "Americanah" in Nigeria. “What does it mean to be in a place and feel like you’re not in a place?” he says.

Images from the South Bronx feature, as Ugiagbe describes it, “stereotypical expectations:" jostling immigrants, people of color and the despair of the aged. “This is where you can find me; this reflects my America,” he explains. In that graphic bluntness, he finally takes pride in the borough, the land of his becoming.

“I used to feel a sense of shame,” he admits. But now he grasps that “the grass is greener where you water it.”

With the pictures set in Nigeria, most of which were taken from vehicles and framed by the windows of automobiles, we are ever conscious of the diasporic self-traversing those spaces, aware of his possibility of escape. The photos wax nostalgic because Ugiagbe set out to revisit childhood memories: children eating at a mama-put shop and okada riders illuminating the night with their headlights.

His creative path began with painting. He took up the craft in 2005 as an elective while majoring in Microcomputers for Business at Hostos College where his professor noticed his talent. His sister, Imuentiyan, however, traces his artistic origins to much earlier in life, back when Ugiagbe created a calabash for a class project in JSS 3 in Lagos that left his family and classmates in awe.

In 2011, he started taking photographs as references for paintings. Initially, he “hated” the medium and didn’t consider it a viable mode of self-expression. Not until he attended the 2012 Gordon Parks' Photography Exhibition in Harlem.

“The images spoke to me,” he said. He then began formally documenting the South Bronx through his small camera and created his first photo series, The South Bronx Special. Ugiagbe shot photos during his lunch break at his day job in the Account Receivable department at Lincoln Hospital. It was one of his many ways of maximizing his time, even taking the stairs at work as a form of exercise. Driven by an incessant desire to prove himself, Ugiagbe chased his ambition to thrive as a multidisciplinary visual artist and hone his crafts feverishly. “There was a bit of madness to my passion for this thing,” he says.

If photography captured his situation, painting expressed his emotions, especially his heartache and loss of self after a breakup that inspired his he-series in 2008.

Ugiagbe’s art and photography have been featured in over ten exhibitions, he’s received five awards and has collaborated with filmmakers and musicians. By August 2017, he’ll be pursuing his MA at the Royal College of Arts in London.

Nevertheless, attaining success was not without its pitfalls. He got rejected by an MFA program at Yale University and during the BRONX:AFRICA exhibit last year, only one of his 24 submissions was accepted.

“The arts have always been my coping mechanism,” he says. “Institution isn’t validation in a sense? They don’t do the work for you. I’m the one doing the work. Any institution denying me access does not define me.”

By shooting pictures, pointing his camera outward from his waist, Ugiagbe in fact looks inward. By capturing his isolation, he reveals himself as a character at odds with his environment, lost in the between. But photography became Ugiagbe’s way of navigating Lagos and the Bronx and staking his claim to both worlds. Ironically, through his images he found belonging. His work is at once melancholic in its depiction, but it evolves into a triumphant culmination on Ugiagbe’s path of self-discovery.

Today he joins other artists like the writer Taiye Selasi in debunking the myth of national identity and how the “vocabulary of ‘coming from’ confuses us into placing ourselves in mutually exclusive categories." Today, Ugiagbe defines home as both the Bronx and Nigeria.

Unbelonging will be on display at the Bronx Documentary Center until August 13.