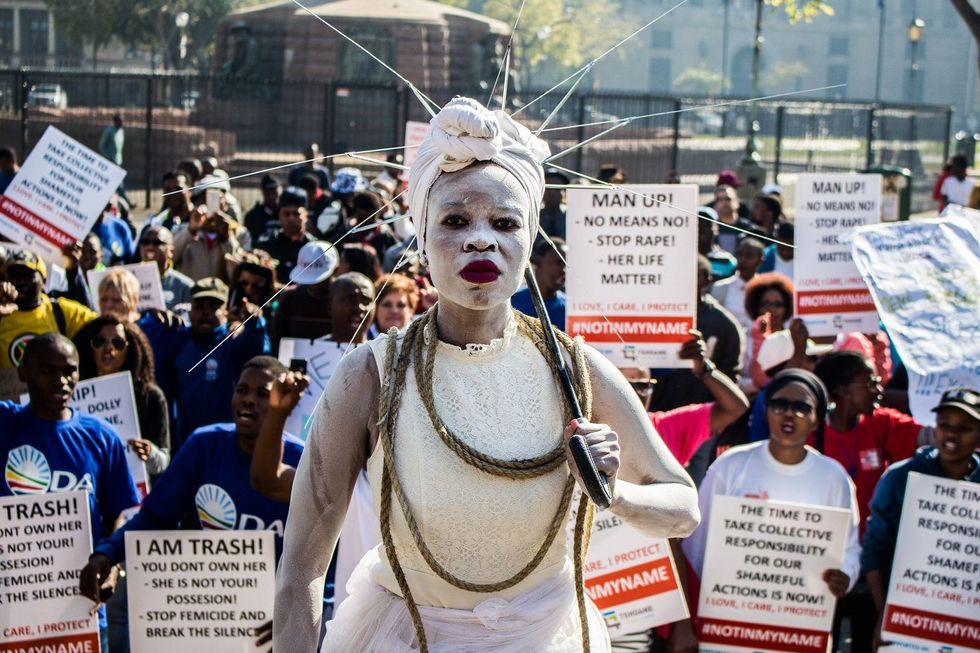 On Saturday, the #NotInMyName march in response to the multiple murders of women in South Africa by men, took place in South Africa's capital, Pretoria. From Church Square to the Union Buildings, the official seat of the South African government, the march organized by three young men—Kholofelo Masha, Siyabulela Jentile and Obakeng Motshabi—demanded action, especially by men, on the issue of violence against women.

Before the march, there were a few speakers—which included a sexual abuse survivor and some of the organizers. “We want these rapists and perverts to know that they will not do what they are doing in our name,” said Masha. “This march was organized by a group of concerned citizens. We are not a movement. We are not an organization just yet. We just saw some things happening and realized that society is very quiet about them. And we said, it’s time that we speak. For a long time men have been very quiet. You hear a lady screaming next door, and you [carry on sleeping], when you know there is a problem. It’s time that you rise up, and call all the men in your community, and say bafethu, let’s go.”

The march was led by “The Lady in White”—a woman who was dressed in all white, and, according to the organizers represented all women who have been victimized by men in South Africa.

Among the protesters, there were some personalities such as soccer player Mathew Booth, rappers AKA and Cassper Nyovest, among others. The latter tweeted his disappointment at the fact that there weren’t any prominent politicians at the march, and that men didn’t come in large numbers.

The march ended at Union Buildings, where, among other speakers, was Siyabulela Jentile, who was the main organizer of the march. “We can turn the situation around. We can speak up against gender-based violence,” he said. “Gents, we are supposed to take responsibility. All of us. I don’t care if you’ve never raised a hand to a woman. For the fact that you are not saying anything about it, you are equally responsible.” He went on to emphasize that all men were responsible for the deaths of women like Karabo Mokeona, who is one of the women who have been a victim, among other slain women.

“I’d like to say a few words on behalf of all men in South Africa," Jentile continues, "whether they agree with me or not. We apologize. We have failed you. All of us. From today onwards, I’m not going to debate about it. Because we are a country that likes debate—we are busy analyzing and not checking the solutions. It’s time for people to rise up.”

He went on to speak against desktop activists, condemned government’s silence on the issue, and pleaded that government organizes programs to teach young boys in schools how to treat women.

You can watch his whole speech in the clip below.