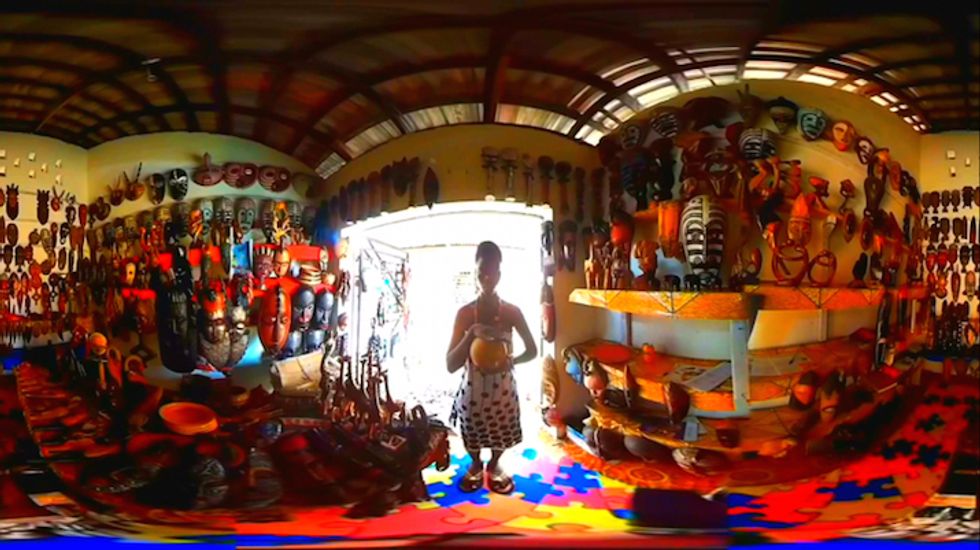 A new virtual reality short film from Ghana follows a young woman as she journeys through a dreamscape of Accra.

NubianVR, a new virtual reality production company rooted in Accra's underground art scene, is on a mission to transform the way we create and share multimedia experiences.

First presented at the 2015 Chale Wote Street Art Festival, the company's 360-degree short film Pandora was recently spotlighted on Shadow and Act. As described by co-directors and producers Jonathan Dotse and Kabiru Seidu—NubianVR's co-founders—the film follows Pandora as she journeys through the dreamscape of virtual Accra, where the ancient Greek myth is re-imagined in an African context and retold through the looking-glass of virtual reality.

Actress Doris Mamley Djangmah stars in the title role as the lone character.

"Working with virtual reality has been one of my lifelong dreams which is finally metamorphosing into reality," Dotse wrote on his Afrocyberpunk blog. "I’ve been designing VR headsets since I was a kid, but I only started building real (as in working) models in November last year when I first discovered the joys of Google Cardboard."

The filmmakers recorded the interactive film in one weekend using a dual Kodak SP360 camera rig and stitched the final together together during the editing stage.

Viewers of Pandora are in for an immersive treat. Although the film only lasts four minutes, this fleeting experience is a revealing introduction to what many industry experts are predicting will soon be the dominant art form.

To experience the 360-degree effect on a desktop, use either the navigation icon in the upper left hand corner or click-and-drag your mouse on the video.

**Editor's Note: The owner of the Afrocyberpunk blog was incorrectly listed as Kabiru Seidu. Jonathan Dotse is the owner.