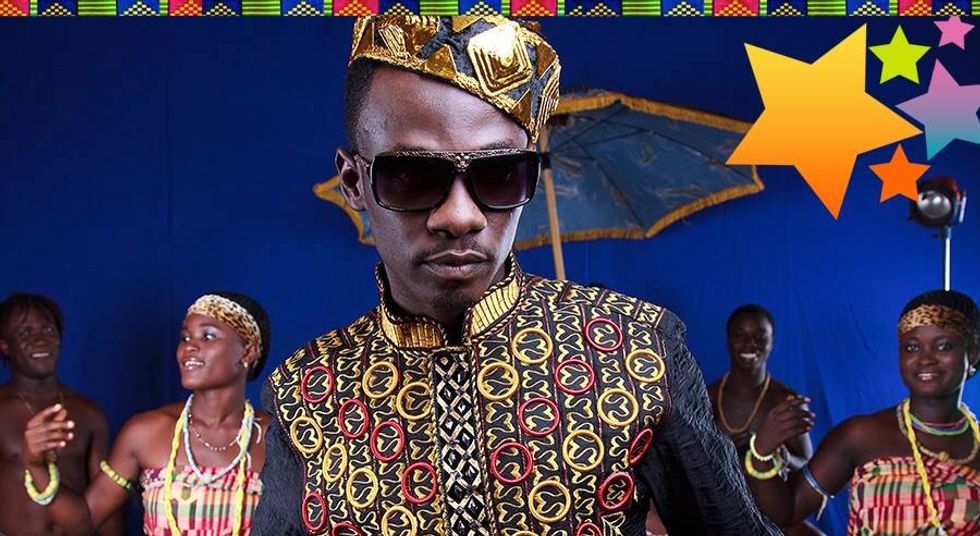 Hiplife star Okyeame Kwame, a founding member of one of Ghana’s first rap groups Akyame, shares the 10 things he loves the most about Ghana.

In our "10 Things I Love" series we ask our favorite musicians, artists & personalities to tell us what they like the most about their home country.

In this new installment, hiplife star Okyeame Kwame, a founding member of one of Ghana’s first rap groups Akyame, shares the 10 things he loves the most about Ghana.

Ghanaian people are very loving. They behave just like the sun that we are under, always warm. When you come to Ghana, the first thing you meet is very, very big brown teeth. Everybody's smiling in Ghana as though we don't have pressure, as though we don't have economic pressure. Everybody's smiling, even though we only have 10 percent of our gold, we gave it all to foreigners, they also have 10 percent of our oil. I think maybe it's the sun.

The most popular form of music in Ghana is called highlife. In highlife, you hear lots of guitars, very high pitched singing and songs mostly about love. Young people fused it with hip-hop and created hiplife, the music that I do.

Hiplife started in '96, but before then people had tried to rap. I had been rapping since '91. Then in '96, I found a producer and we started doing that sound. Before that, a young man called Reggie Rockstone, who had come to live in America, came back to Ghana with swag, dreadlocks and shorts and a certain type of expression that the Ghanaian youth had been waiting for. His first album was called Makaa Maka, which kind of means “speak, don't be afraid.”

That empowered all of us to release our own music. We [Akyame] were the second rap group that came out of Ghana. We had the most commercial success and sold many records. Almost every song that we did was a hit. We gave the hiplife music its crossover appeal, because first, the older people were skeptical about it. They thought “what is this Americanized music you are playing?” Then, when we added the indigenous guitars and indigenous drums, they felt that, “okay, it's here now.” That's hiplife.

Hiplife has evolved from that sound to a new sound that we call Azonto, which is driven by dance. Because again, people are stressed out, people have economic issues, but the Ghanaian always wants to cover up his pain with a form of energetic smile or an energetic dance. Everybody's dancing now.

Now, big artists have been able to take their popularity and evolve it into real power, as in during elections. We use the same power to preach for peace, to preach against violence, to bring unity. Based on the same power, I’ve been a UN Ambassador for Ghana, for Africa and I've worked as a national health ambassador advocating for a healthy living.

It can be felt when we’re playing soccer, during elections or when a great person dies. Nationalism is very key for Ghanaians. I believe that it's what has made Ghana what it is. We can look at people like Kwame Nkrumah, who wrote so much and did so much. Though he inherited about 250 million pounds or more from the British when he got independence, he did not build one house for himself. Everything that he did was to make sure that the nation stood well.

Apart from Kwame Nkrumah, we can talk about Dr. Kofi Abrefa Busia, who was the first African to go to Oxford. He came back with all the knowledge to help, to develop. We can talk about Azumah Nelson, a boxer who grew from being illiterate to becoming a professor while he was fighting. His life story alone is inspirational. From a person who never set foot in a classroom, he now writes books and has inspired so many people. There are so many of them. Kofi Annan.

The statistics say that Africa in general is a remittance economy, so the whole continent is being empowered by Africans who live outside Africa. If I narrow it down to Ghana, I can say that around 80 percent of the houses that are built or the businesses that are setup, are done so by people living abroad.

They get the experience, then they come back home to set up businesses to employ people. Now if you are growing up and have one person in your family who is living at least in America or the UK, that one person can pay the school fees of all the children, take care of medical bills, build a house that the whole family will live in and still come back once every 20 years average to see his investments.

"Speaking in direct units, more Ghanaians abroad buy my music than at home. Ghanaians outside, they support the nation."
All of this is a huge sacrifice, because these Ghanaians who live outside of Ghana could have invested in themselves, but they don't. Everything that they do, their idea is to go back home.

Fashion can be divided into three sections. There's the old people, 50 and older, who go to church on Sundays. They want to wear their traditional kente and wear their batik and their prints. Then there's the corporate people who like to wear black suits. And finally, there’s the young people who are trendy, everybody wears their jeans and their harem pants—sag and swag.

But no matter the age group or segment, they will find a way to put something Ghanaian around themselves. You can see someone ie jeans with a batik patch. You can see someone who is totally dressed-up in a suit but will have something Ghanaian. Fashion in Ghana is becoming more Ghanaian. I think that is something that is amazing. I will give the merit to President Kufuor who decided that we wear too much foreign stuff, so on Fridays we should make it “African wear Fridays.”

Every Old Person Can Discipline Any Child.

Whether they know you or they don't know you, they can discipline you. The proverb is that you are born by your parents, but you are raised by the village.

Everybody in the village who is older than you can come and send you out to get things. "Get me a banana. Buy me cigarette." Anybody. That type of social pressure on children helps them grow. It makes them more communal, more molded.

Yesterday I was missing my family, missing my wife and children, and then in the evening someone took me to an African shop and they gave me fufu and snail soup. I forgot about them.

We have amazing, different types of food. One that for me is the best food in the world is fufu. When I have malaria and they give me fufu, I don't need to take medicine. Fufu for me, it quenches your pain. When you eat a good bowl it's like a reconnection with your ancestors.

There's two others called red-red and also Kofi broke man. On the road sides, they will keep small fire in the pan and find a way to fan it. Then they will take ripe plantains and put them on. Even if you have one shell, one cent, you can buy it. It's amazing. One nice hot afternoon if all that you have is one cent, a Kofi broke man will be there to save you from hanging yourself.

Because they hustle. They work really hard. Because, when they haven’t been able to have the education that can give them the amount of money they want, they will stow away onto a ship, go and land a Morocco, walk on the desert and then catch a boat to Spain and eventually end up in Belgium [to work or study]. That is how much they are willing to sacrifice themselves to be able to make something.

I think I'm a successful musician, but I will have a Ph.D before I die, otherwise my father will turn in his grave. I'm not doing it for myself totally. I'm doing it because if I don't do it, I will feel insecure.

It's embedded into everything, from the lifestyle to religion to culture. And no matter how modernized people are, whenever you hear the drum, even if you do not have a linguistic ear like me to understand what the drum is saying, you can feel that your ancestors are calling you.