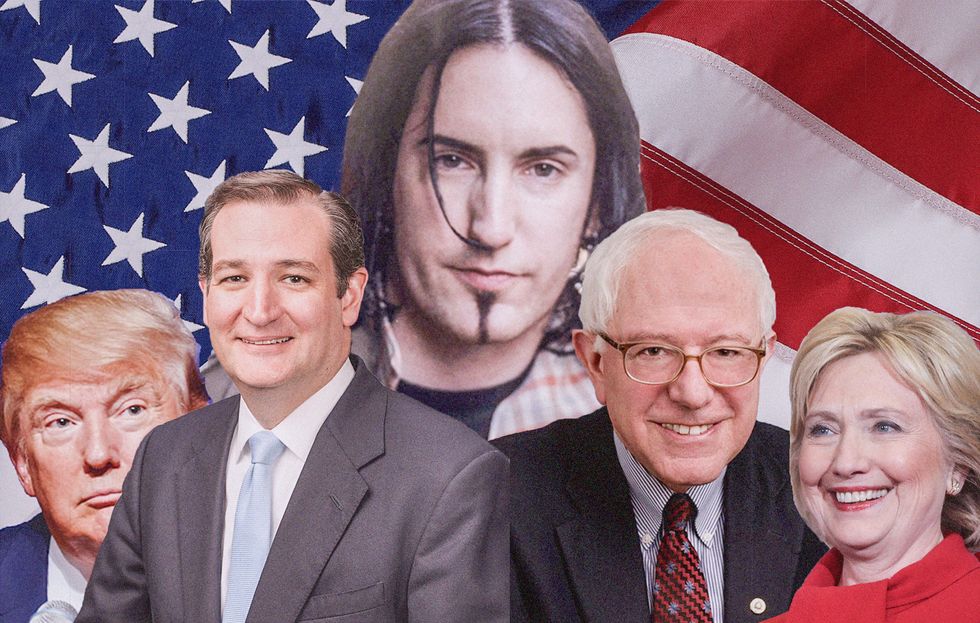 David Bowie’s video for the track, “I’m Afraid of Americans” opens on Christopher Street, NYC where Bowie is reading the paper. The headline refers to a white supremacist loner type named Jonny (editor's note: pretty sure that's Trent Reznor) who proceeds to chase Bowie through Manhattan. As Bowie runs, stumbling into Jonny again and again, a myriad menacing characters take his place, posing with their fingers as guns. The imagery is a play on Martin Scorcese’s Taxi Driver and the all too real American pastime of perpetrating mass shootings.

Like Bowie, I too, am afraid of Americans. I haven’t always been, but as a 33-year-old born in Nairobi and raised in New York City, I’ve become far more aware of the hypocrisies and dangers around me.

This year’s American elections have been particularly fraught. When examining the frontrunners, I inevitably want to know what these people reveal about Americans and the American view of the world. Turns out it’s not an easy task.

In order to be president of the United States you must be a natural-born citizen. Ted Cruz is Canadian. The fact that this man is even perceived as a viable candidate for the Republican nomination is a sorry indication of the state of the electorate. Cruz’s only saving grace is that he is a Texas-raised, conservative racist. Following in the footsteps of millions of non-English Europeans before him, Cruz is assimilating into the construct of white supremacy in America.

Since the 2008 election of outgoing President Barack Obama, the Southern Poverty Law Center noted steady growth of white supremacist groups, with a 14 percent uptick in 2015. Indeed, many working to middle class white men feel swindled by Wall Street bankers, confined by debt, fearful of professional women and supplanted at work. What they don’t understand is that these impositions have more to do with the policies of rich white men like Ronald Reagan or George Bush Sr. and Jr. than the first black president.

Donald Trump is a different animal. Like Cruz, he’s a racist. But what really makes him relatable is that he is racist and sexist. These two elements in combination are critical to a ‘classic’ American identity that many feel they are losing. Aside from the racism implicit in housing the world’s largest prison population, condoning rampant police brutality, and unabated residential segregation; this is one sexist-ass country.

America is so sexist that a 2015 U.N. delegation of three women from Poland, the United Kingdom and Costa Rica evaluating gender equality were appalled. Delegate Frances Raday from the U.K. asserted, “Religious freedom does not justify discrimination against women, nor does it justify depriving women of their rights to the highest standard of health care.” Indeed, American women endure epidemic levels of rape on college campuses, draconian laws giving states control of pregnant women through incarceration, and no Equal Rights Amendment (ERA) to outlaw sex discrimination nearly one hundred years after its proposal in 1923. In fact, few people even know that the modern backlash over the term and movement of 'feminism' was born out of Reagan’s White House with anti-feminist ambassadors like Nancy Reagan and Phyllis Schlafly. So, every time Trump denigrates a vocal woman like Rosie O’Donnell or Megyn Kelly, he’s playing a reliable card.

As much as I want a woman to be president of the United States, the fact that Hillary Clinton is actually the best one for the job is depressing. I would never discount Clinton’s intellect, political experience, or work ethic. Yale Law, First Lady, Senator and finally Secretary of State—she’s actually overqualified. Nevertheless, what depresses me is that she is a white woman born from the rotting carcass of white male supremacist bureaucracy.

Sure, we can point out the humanitarian cost of her foreign policy directives as Secretary of State in bombing places like Libya and Syria. Sure, we can call out her professional encumbrance with big banks like Goldman Sachs, JP Morgan Chase and Morgan Stanley among other Wall Street heavy hitters. Sure, we can question her commitment to racial justice given her difficulty relating to young black activists and a history of racialized messaging about black youth. But my cynicism as an immigrant, in a nation of immigrants who hate immigrants, is maybe she really is the best America can do at this point.

Senator Bernie Sanders is a fellow New Yorker from Brooklyn (I rep the Bronx) who worked with CORE, SNCC, crossed paths with MLK and is the longest serving independent member of Congress in American history. After sixteen years in the House of Representatives, Sanders is in the midst of his second Senate term. A child of WWII born in 1941 to Polish parents struggling to make ends meet, Sanders was radicalized by financial hardship amidst a nation in flux. As a democratic socialist, he stands firmly to the left on many hot button issues like the War in Iraq, the closure of Guantanamo, a two-state solution for Israel and Palestine, and the 2008 bank bailout (though in 2000, Sanders voted for the Commodity Futures Modernization Act that contributed to the financial crisis).

The Senator’s inclusive response to criticism from Black Lives Matter (BLM) activist Darnell L. Moore about holes in his stance on racial justice add to his credit as a refreshing candidate. In fact, a visit to his website reads like a utopian wet dream as he waxes poetic on class, race and sex equity. For all this, he boasts a huge following among the most ideologically marginalized segment of America—young people plus a number of prominent artists/thinkers/activists like Cornel West, Rosario Dawson, Ta-Nehisi Coates, Susan Sarandon, Killer Mike, and Erica Garner, the daughter of Staten Island police brutality victim Eric Garner.

And yet, Sanders is 74 years old, which would make him the oldest U.S. president to date. He is also a white man, albeit of Jewish descent, who has served one of the smallest, whitest (a whopping 95.2% with most black residents behind bars), gun-happy states in America (bummer). In many ways Sanders’ billing as the movement leader who can infiltrate Washington, D.C. reads like some white liberal Amero-centric bullsh*t with a splash of melanin. The jury is still out.

In the U.S., even when you don’t pull the trigger, somehow you get the blowback. Slowly you stop thinking critically (thanks for nothing Ted), neglect to communicate with others (Trump 101), learn to fit in (Hillary’s corner) and get obsessed with notions of salvation (hello Bernie!). It’s cynical I know, but the only way to gain sustainable “perspective” is if each individual rejects their inner Jonny, gets a passport and has a beer with a stranger. This way, when elections roll around, leaders truly reflect and possess the political will to affect change. After all, a nation is shaped by the people we admire. So like BLM and Angela Davis I endorse no one, but may the best compromise win.

Agunda Okeyo is a writer, producer, filmmaker and activist born in Nairobi and raised between New York City and the Kenyan capital. Follow her on Twitter @AgundaOkeyo.