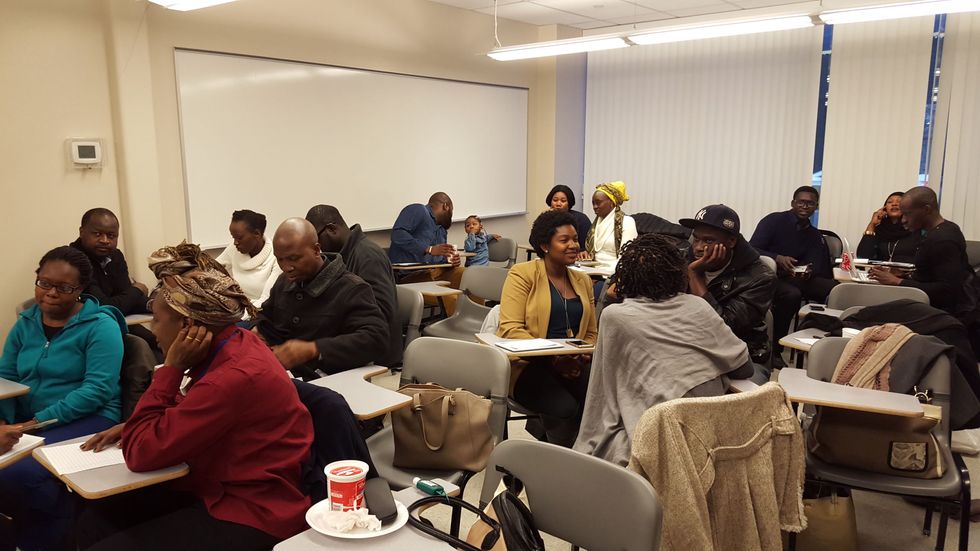 For African immigrants in New York City accessing services in languages they understand can be difficult. African Communities Together wants to change that.

New York is like a great big beautiful buffet of cultures and communities, sometimes blending, sometimes clashing, but always diverse. And increasingly, many of the dishes on the menu are African. From The Bronx to Staten Island, from Harlem to Brooklyn, African immigrants from all over the continent are popping up all over the City.

But while these other immigrant communities have won a place at the table for their languages, Africans are still outside looking in. Under New York’s Language Access Policy, the City instructs all its agencies to provide services to New Yorkers with limited English in six “top languages.” Those languages include Spanish, Chinese, Russian, Korean, Bengali, and Haitian Creole—but not French, not Arabic, and none of the indigenous languages of Africa.

Why does the current policy leave out the entire African continent? Some of it is because of our diversity: New York’s Africans come from dozens of countries and speak hundreds of languages. And some of it is due to undercounting. The City relies on Census Bureau questions that ask respondents what language they “speak at home.” These data fail to account for multilingual Africans who speak Bambara, Fulani, or Krio at home but are accustomed to using languages like French and Arabic for official business and inter-group communication.

The problem is not just that African language needs are undercounted, but that Africans need to stand up and be counted. When other immigrant groups have been left out of City services and policies, they have raised their voices—in whatever language—and demanded to be included. Africans in New York have not yet done the same, though we are beginning to.

The current Language Access Policy has been in place since 2008, when it was enacted by Mayor Bloomberg as an executive order. But now the City Council is moving to codify it in legislation. This is a perfect opportunity to build on and expand the accomplishments of the current Language Access Policy and expand it to include New York’s fast-growing African and Arab immigrant communities.

Unfortunately, the draft legislation proposes to keep the number of “top languages” at six, ensuring that French and Arabic will continue to be excluded. African Communities Together and other African and immigrant organizations are calling for New York to increase the number of languages to 10, to include French and Arabic, and to improve the methods it uses to survey clients on their language needs. On Thursday November 17, we will testify to the City Council Government Operations Committee. We invite you to join us in claiming our place at the table.

Amaha Kassa is ACT’s founder and Executive Director. Amaha is an Ethiopian immigrant with over 20 years of professional experience as a labor and community organizer, nonprofit director, and social entrepreneur. For nine years, Amaha directed a successful workers’ rights nonprofit in Oakland, California, growing it from a startup to one of the leading organizations in its field. Amaha is a licensed attorney who earned his law degree from the University of California, Berkeley and a Master’s in Public Policy from Harvard Kennedy School. In 2012, Amaha was awarded a Black Male Achievement Fellowship from Echoing Green and Open Society Foundations to support the launch of ACT.