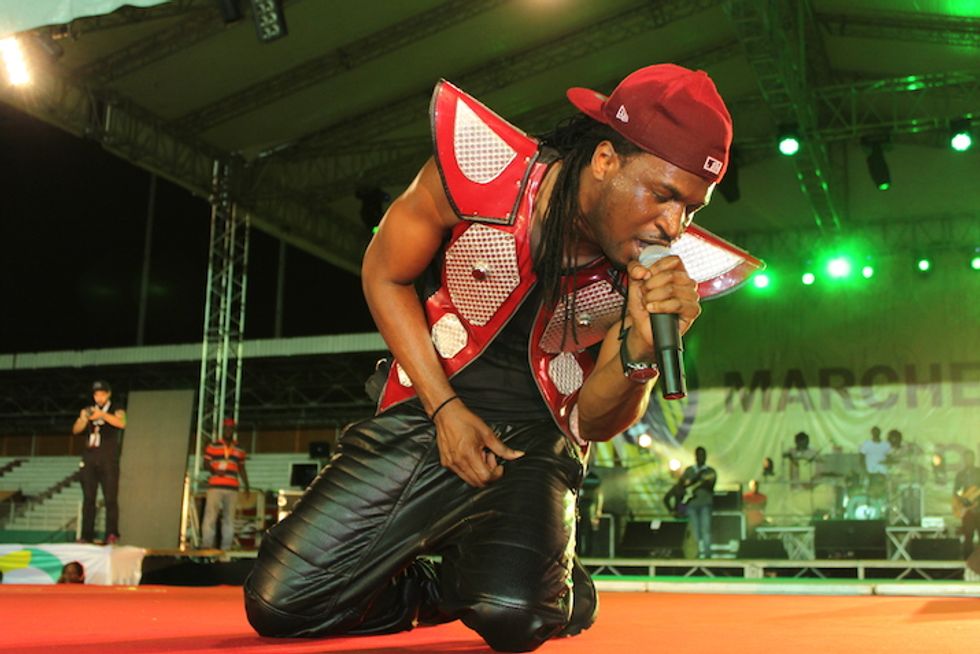 Read our exclusive interview with P-Square right before their live show in Abidjan, Côte d'Ivoire.

We're currently in Abidjan, Côte d'Ivoire to cover the Marché des Arts du Spectacle Africain or MASA festival — a convention hosted by Côte d'Ivoire and the Organisation internationale de la Francophonie (OIF) in support of the 'African Performing Arts.' For the opening of the festival, the convention organized a concert that featured Nigerian superstar twins Peter and Paul Okoye aka P-Square.

The Okoye twins know how to keep an audience's energy up, it seemed as the entire Abidjan crowd was in a deep ecstasy that only kept growing throughout their set. P-Square offered up an electrifying show that featured all of their hugehits and even dropped the 2Pac classic "Do For Love." At one point, Peter took up the guitar to play a couple of covers that led into some tight dance parts accompanied by two of their dancers. When the first notes of "Personally" rang out people lost it, jumping from their seats onto the field and running to the stage. Everyone was overwhelmed by the show and the security had to get tighter at the end of the show. We caught up with Peter and Paul the day before their show at their hotel to talk about the upcoming P-Square album and possible collaborations.

Poundo: What can you tell us about your next album, rumored for this year?

Paul Okoye: We don’t wanna let the cat out of the bag [smiles]. But, I’ll tell you guys that the album will come out in the middle of the year in order to meet up with the concerts and satisfy the fans. This year, we went on a month holiday then came back and here we are again. No track list or number of tracks yet, we watch out, trust me! Super fancy guys know the deal. [laughs]

P: You had a song with Rick Ross last year, are you collaborating with any other artists soon? Are there other American artists you'd like to collaborate with — Beyoncé, Rihanna?

Peter Okoye: [Laughs] Like my brother said, we’re working on a new project but the truth is we did two singles "Alingo" and "Personally" and we didn’t feature anyone. There was a time we thought that we had Rick Ross, we had Akonso now what’s going on? We said to ourselves: you know what? We’re gonna put out a lot of songs without any collaborations. When it comes, it comes. We don’t wanna start saying we’re gonna feature this person or that person. In our defense, we have so many expectations, so we’re gonna keep it on the down low. If it happens, fine! If it doesn’t, you know, it’s P-Square, there's always surprises. [laughs]

P: "Alingo" was more electro, "Taste The Money (Testimony)" more back-to-basics and "Personally" was a mix.

Peter: We had this new single "Testimony" because we wanted it for the fans who knew the style we came up with. With "Alingo," the more electro-sounding like you said, we wanted to go with a noisy kind of flavor. We still do all styles. We’re trying to be versatile. For P-Square, we can come up with a R&B song, even a reggae song. We love doing them because we kinda wanna satisfy all of these fans. You might have some fans who just appreciate a song because it's a reggae song. You put out another album without having a reggae song [and they say] 'I’m not feeling the album.' Sometimes it’s good to play along and try to satisfy both ends.

You have the freedom to try new flavors as superstars.

Paul: It’s all about the fans. You don’t need to just do music and stick in one particular style. If you decide to go for reggae, go for it. If it’s makossa, electro, just go for it because you know what you’re doing as an artist. So, we’re OK with that.

P: This is your third time in Abidjan. What are you expecting from your concert?

P: You always have incredible costumes. What are you gonna wear tonight?

Peter: I call it the armor outfit, the one that has the shoulder pads. I call it the "Alingo" outfit. It was my own idea. We’re going everywhere in the world, everyone and every artist wears suits, tee-shirts, blah, blah. I wanted us to look very unique. We don’t use it for every show. We mostly use it for a P-Square tagged concert. For example, we’re here in Abidjan for P-Square live. This is a P-Square show. That’s where we normally use it.

P: We’re here in Ivory Coast, the land of coupé décalé. Do you know have any favorite artists from the genre?

Peter: Fally is a great guy!

Paul: He's a great artist and I know that we’ll definitely work him because he’s got something that most artists are missing. He’s the new generation of the Awilo, Koffi Olomide. He’s the new kid on the block when it comes to that kind of style. The style is really important for our own generation.

P: Are you gonna release a video clip for "Testimony"?

Paul: Definitely, we’re gonna bring out a video for "testimony " soon. Watch out, watch out for it!

P: What should we expect from the video?

Peter: Like I said, we're P-Square and we're full or surprises. It’s always good to surprise the fans. If I tell you everything now, then they’ll say "I was thinking they’d do something bigger." When it comes, it comes.

Scroll through our gallery to see the pictures from P-Square's show in Abidjan . If you want to talk about it, tweet @okayafrica with #psquare and #masa.