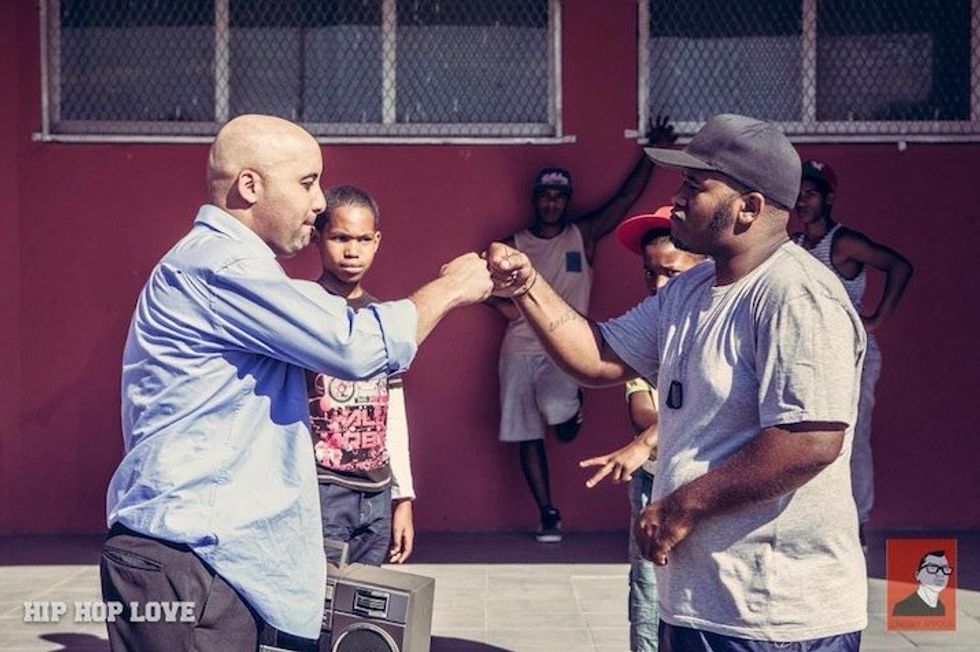 Starting off as a poet in 1996, Cape Town hip hop veteran Perspektif graduated to emceeing a few years later, and has since then become a beatmaker and producer in his own right. His long-time collaborator Nama Xam, with roots in the little-known and often undervalued Khoekhoe indigenous tribe of South Africa, knows better than anyone the multitude of flavours that hip hop has taken on across the world. In a new cross-continental video for their "Hip Hop Love" note the two join native New Yorker John Robinson aka Lil Sci (Scienz of Life), on a walk through what inspires them about hip-hop most -- the one thing we can all relate to, which is our love for the culture itself. We caught up with Perspektif and Nama Xam to talk hip hop as a culture and as a business, Raiko’s open letter and everything that the genre means to them.

Shiba for Okayafrica: Let’s jump right in. Please tell us a little bit more about yourselves... What was the come-up like?

Perspektif: Nama Xam was one of a few producers who I used to approach for beats until the point where I could do it myself. I don't limit myself to any box, however I'm seen as both a conscious emcee and poet and I'll describe my productions as an eclectic mix of hip hop, soul and jazz with a lot of emotion in it. I don't exactly remember how I got into the hip hop culture, however I know that it was inescapable, as in my area and surroundings I kept seeing graffiti, b-boys breaking and hearing rap songs on radio, even if it was mostly mainstream artists. I got the real underground stuff, as a young kid, from amongst others, my cousin who used to frequent the infamous club, The Base. I’ve been performing as a solo artist since 2006, backed by DJ Madfingaz, and before that (then known as Illuminate) I was fortunate to be a part of one of the freshest live bands to ever grace Cape Town, Supadan. Prior to that I was part of a 3-man crew called Stems and this beginning stage was where I discovered the artist within me and sharpened my pen game.

Nama Xam: I grew up in the Mitchells Plain, a township on the Cape Flats, and at an early age was exposed to the culture of hip hop. Besides seeing all the elements of the culture all around, my brother was a big influence in my start in hip hop. I remember him giving me a bootleg TDK cassette of Public Enemy’s –Fear of the Black Planet. I was hooked. As most of us at that time, we tried to master most of the elements and our start point would most of the time be breakdancing. I moved on from breakdancing to beatbox and then found my place in storytelling as the emcee. Since 1990 I’ve been building the pillars of hip hop within through knowledge of self. I’ve discovered my father’s lineage is to the Nama Khoe (a Khoekhoe tribe of Southern Africa) and fused that culture with the hip hop Culture. The meaning of the Xam (pronounced G~am) is Lion in the Namagowab (Nama language). I’ve done collaborations with many artists over the years, been in a crew called Neophytes, which consisted of Ej Von Lyrik, DJ Azuhl and myself. We had a EP out with some nice tracks too. My music is about the people, telling stories of our struggles, circumstances, accomplishments and triumphs.

OKA: So how did the conversation with John Robinson that sparked the idea for this track go down?

Perspektif: I met John Robinson in Cape Town at the Red Bull Studio in February 2010, where he had a pre-performance talk. We spoke about his travels and how would he describe his love for hip hop. A week or so after he left SA to head back home, I realised that myself and Nama Xam had the very same talk months ago, with the intent of doing a track together along with any other like-minded emcees. I pitched the idea then to both Nama Xam and John Robinson, after I heard the Hipe-produced beat (which funny enough I also heard at Red Bull Studios, Cape Town, on a mix CD) they both agreed to jump on the track. DJ Mad Fingaz completed the cypher with the cuts.

OKA: Hip hop as a culture has come to mean so many things to so many people around the world. What is hip hop culture about for you guys in SA as opposed to hip hop in the US?

Perspektif: Hip hop culture came to this country via records and images from the US, so there was always at first an overseas influence, however because Knowledge Of Self is the foundation of hip hop, it led me then on a journey of discovery and the overseas influence then became more of a window into another version of me because I see us all as different versions of the one. That was actually part of the convo I had with John Robinson, when we agreed that there's something in all of us, no matter language, background or belief, that connects us all to hip hop. That's the love for it. Because of KOS, we in SA realised that the 4 elements of Graffiti, B-Boying, DJ'ing and emceeing, all linked back to Africa in the form of rock paintings, dancing, drumming and storytelling. Its like hip hop had come home. Today, hip hop to me is about the knowledge of myself in the bigger scheme of things and how I use the elements to express this.

Nama Xam: I am hip hop. Of what I understand hip hop to be is that consciousness, and love for self. A freedom to express how you feel and heal, be it through body moves to a break in a song that makes you continue, or the beauty on a pail train brightened with hues of graffiti or the music, to quote a house track by Dennis Ferrer – “How do I let go?  When the thought of losing me, keeps me dancing to be free.” As you know hip hop is a sample based culture, so as a human being I sample everything in life, or as much as possible to be me. I can speak for what’s going on over the water but the cipher I have around me is moving forward ever backward never.

OKA: Raiko's open letter announcing how he wants to quit DJ'ing has caused quite a stir in the [South African] hip hop community. What are your feelings on the way the genre has evolved over time, commercially and underground? How do “heads” and newer fans reconcile that?

Perspektif: That's a tough one because it's based on perspective, (LOL) no pun intended. Experience is always the greatest teacher and maybe heads and newer fans should take Raiko's letter as kind of a guide. Everyone before you left a path for you to navigate, so you not entirely on your own or heading into uncharted territory. Educate yourself. Learning in this day and age is easier due to the internet. If you not broadening your knowledge then it's your fault. Raiko's letter was only his experience till now. I think both the mainstream and underground have grown in various ways and social media played a huge part in that. To say it's become better or worse is purely ones perspective, however I can say that more people are eating thanks to hip hop and there are more opportunities now, however; I always ask myself whether or not most of those eating are actually practitioners or just people on the side, milking the culture for all it has. Also, the sound quality of tracks has become better and because of this mainstream radio has somewhat opened their doors to us. I love the underground (don't box myself as such or mainstream) however I feel as if there are many underground emcee's now trying to emulate that mainstream sound or whatever is trendy and the only thing that differs them from the mainstream artist are their lyrical content. Underground has always been the place that would push the envelope but I feel that there are very few that are still doing that now. I'm glad for that few though. Over and above those terms, I just believe in music and the art of it, fused or pure.

Nama Xam: We must understand that the business is sometimes ugly. Big up to Raiko to making the babies aware but also this is a learning tool to those just starting out so that they no longer be the used but be the leaders of the new school. Understanding that hip hop the conscious, hip hop the culture and hip hop the product are the three levels we deal with on a daily. The product is mainly being controlled by those who have no clue or refuse to acknowledge hip hop the conscious and culture, unless they wish to prostitute it. What the young ones should realize is that there is a whole lot of information and examples of lessons learnt. And that the power (buying power) is with the people and accessibility is at the click of a button. The SA music industry will always have the tyrants but US the hip hop generation should build our own market through real human investment. Saluta continua!