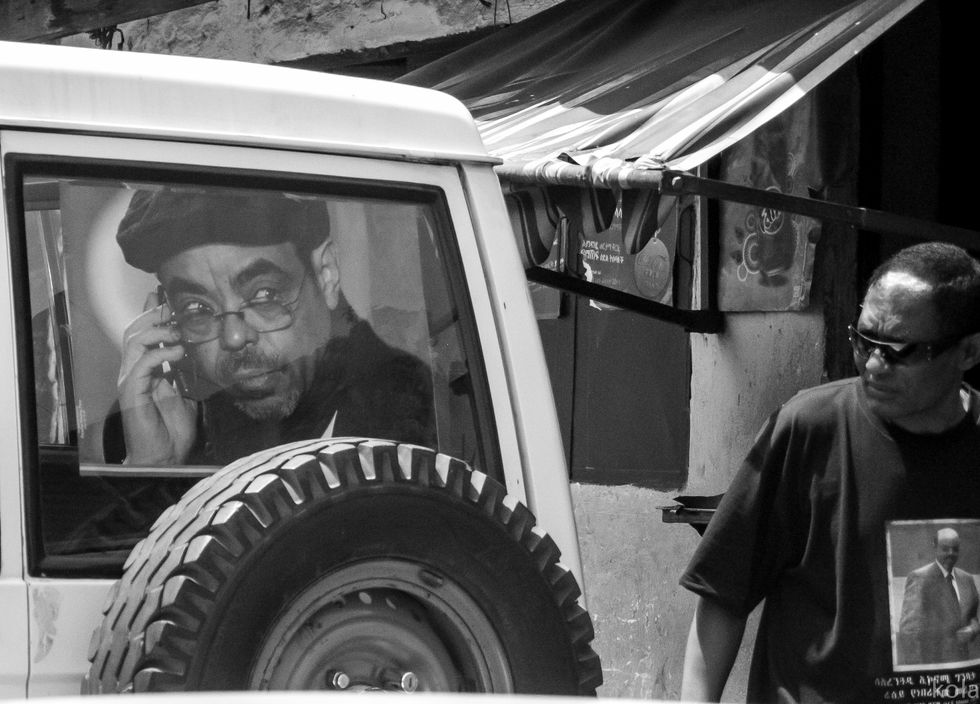 Following the death of Meles Zenawi last month, images of the late Prime Minister flooded Addis Ababa, Ethiopia. Okayafrica contributor, griot, and photographer, 'kola, captured this ritual of remembrance in all of its incarnations across the city, from t-shirts to massive billboards. We caught up with 'kola to ask him about the sentiment surrounding the photo series he calls "Long Kiss Goodnight."

OKA: What inspired you to take this photo series?

'k: One day I woke up and heard the PM of Ethiopia had passed away and almost immediately, the same day, all these posters and billboards appeared all over the city. I was awed in 2 respects: the speed at which they were produced and the sheer amount of the posters all over the city. A more cynical person might wonder how long the posters had been in storage waiting to go up (rumors of his passing away had been floating around for about a month before the official announcement of his death). Seeing his face on all these posters brought back some memories of time I spent in Tunisia before the revolution. The then president's face, Ben Ali, was on posters and billboards all over the country, in almost a permanent fashion. One could not get away from it. In hindsight, I wish I had recorded those as I never fathomed there would be a revolution and that the posters and billboards would disappear overnight. Though PM Meles' posters and billboards are post his death, one cannot expect them to remain up forever. And there is something more soothing about Meles' face than Ben Ali's. An intellectual looking, likable uncle waving at you from a billboard on your way to a cafe. I wonder if he will become a pop or cultural icon in Ethiopia...

A photograph of Meles that I did not see on posters, much to my disappointment, was this one ... talk about iconic ... that's Meles plaiting his wife's hair ...

OKA: What was the public consensus about former Ethiopian Prime Minister Meles Zenawi at the time of his passing? Did you get a sense that people liked him?

'k: I'm not an Ethiopian and attempting to gauge what Ethiopians really feel about issues can be tricky if you are a foreigner. One thing I have also learnt is that the general public is splintered into different groups. That said, from all I noticed, there was a general feeling of sadness from the nation. As can be imagined, this is the only leader most youths have known since birth and the first leader to die due to "natural" health reasons for awhile in Ethiopia. So there was a sense of sadness in the air in Addis Ababa for a lost leader who died young at 57, nonetheless. That said, his funeral is the first head of state funeral the country has had since 1930 so there was a sense of a special national grieving once his death was formally announced.

OKA: What is the text that accompanies the image of Zenawi?

'k: The text is in Amharic... the national language of the country. I do not read nor understand it but passerbys told me they include poetic accolades and farewell speeches, some in Meles' words.

OKA: Who sponsored the widespread image of Zenawi in public spaces?

'k: The widespread images were sponsored and put up by various groups including private enterprises like banks, public institutions like schools and government agencies and some by individuals. Most posters indicated who put them up. Not an uncommon practice, it seems. Newspapers in Addis are always full of sponsored condolences when some important personality dies or the like. The huge posters all over the city was a new level of that practice though.

OKA: Did you see any posters of Zenawi that had been vandalized?

'k: No, I did not come across such. Not saying there wasn't any but i did not see such in the Addis neighborhoods I ventured.

OKA: Have you seen former heads of state commemorated like this in other countries during your travels?

'k: Former heads of states, not really in my travels. Though I just got back from Accra and I could still see billboards and posters saying bye to the President Atta Mills who recently passed away. Not as heavily concentrated as in Addis. And new roads and building are being constructed in his name. Another country was in Kosova where the first President, Ibrahim Rugova, is still widely adored via posters in the country. Bill Clinton has a statute in Pristina, by the way, talking about former heads of states being commemorated. One thing I can say I am thankful for is that many African countries do not have much of a culture of erecting statutes for living and dead leaders. Posters and Billboards are more easily replaced.

See more photos from "Long Kiss Goodnight" in the slideshow below.