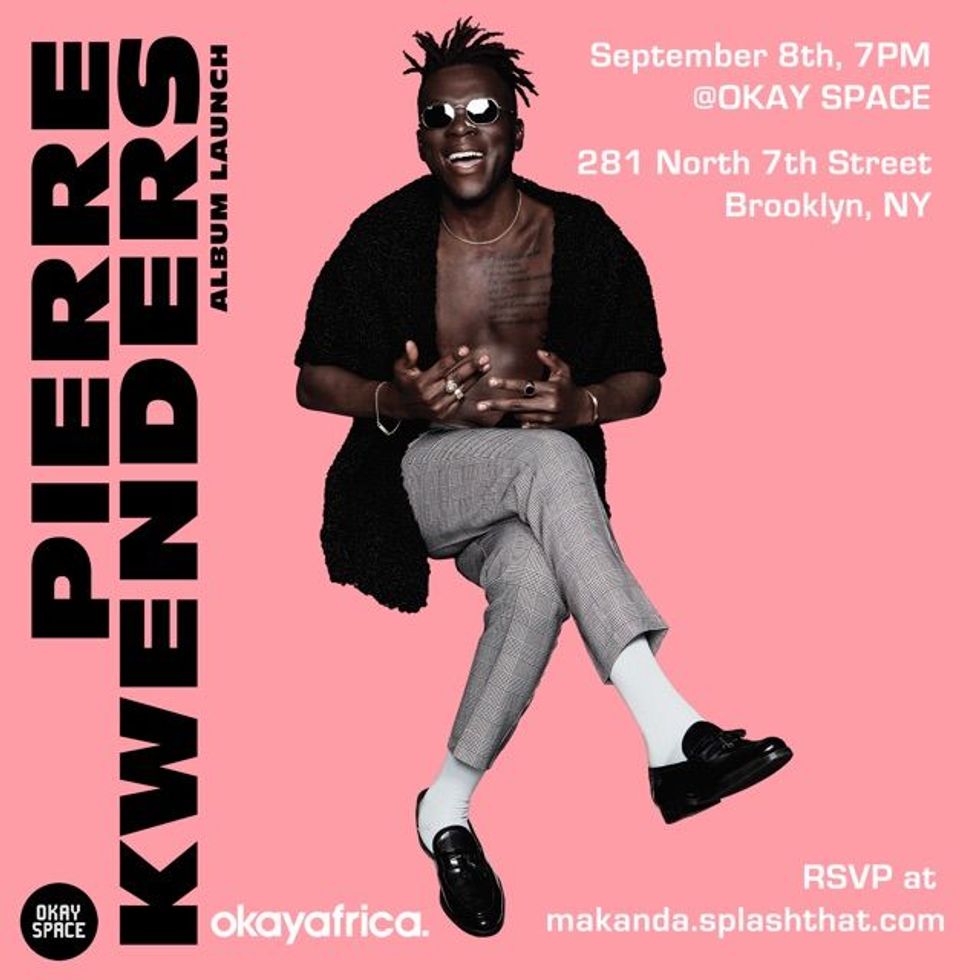 Montreal-based Congolese artist Pierre Kwenders is readying the release of his sophomore album MAKANDA—and we've got a special album launch event planned for it at Okay Space this coming Friday.

Join us as Kwenders will be performing and showcasing tracks from his new album at our gallery space in Brooklyn.

MAKANDA carries the heritage of a modern Africa in which Congolese Rumba is at the forefront. The album, recorded in Seattle, was produced by Tendai Baba Maraire, one-half of the Seattle-based hip hop duo Shabazz Palaces.

Pierre Kwenders’ musical depth is present throughout the 11 tracks, which interweave new wave world music, rumba trap and indie afro. He sings and raps in four languages (lingala, french, english, shona), allowing him aesthetic and lyrical options most artists do not have. These four languages are the album’s cornerstones.

This album puts Pierre Kwenders at the forefront of the Montreal’s afrocentric music scene. "I wanted to reflect a certain sensuality in my lyrics and my singing. There are a lot of love-related songs in this album. I wanted to dedicate it to women, especially," the artist explains. This ode to love is certainly present on the voluptuous song "Sexus Plexus Nexus," while on "Zonga" he remembers a childhood sweetheart and on "Rendezvous" he sings about taking his dream woman to Paris. The women in Pierre Kwenders’ life give him strength, hence the title Makanda (which means ‘strength’ in Tshiluba).

Pierre collaborated with many talented Seattle-based artists, including SassyBlack, Tanyaradzwa and Hussein Kalonji (a member of Chimurenga Renaissance) who played most of the guitar riffs on the album. He also collaborated with rapper Ish, AKA Ishmael Butler, the second-half of Shabazz Palaces. He is a Grammy-Award winner and former member of legendary group Digable Planets.

With MAKANDA, Pierre reinvents himself, moving away from the up-tempo beat of his debut album Le Dernier Empereur Bantou (2014). He drew inspiration from Congolese rumba legends, wanting to explore new sounds and push the boundaries of his own art.

Listen to the singles "La La Love" and "Tuba Tuba." Plus, watch the music video for "Sexus Plexus Nexus" above.

RSVP for the party is open now here.