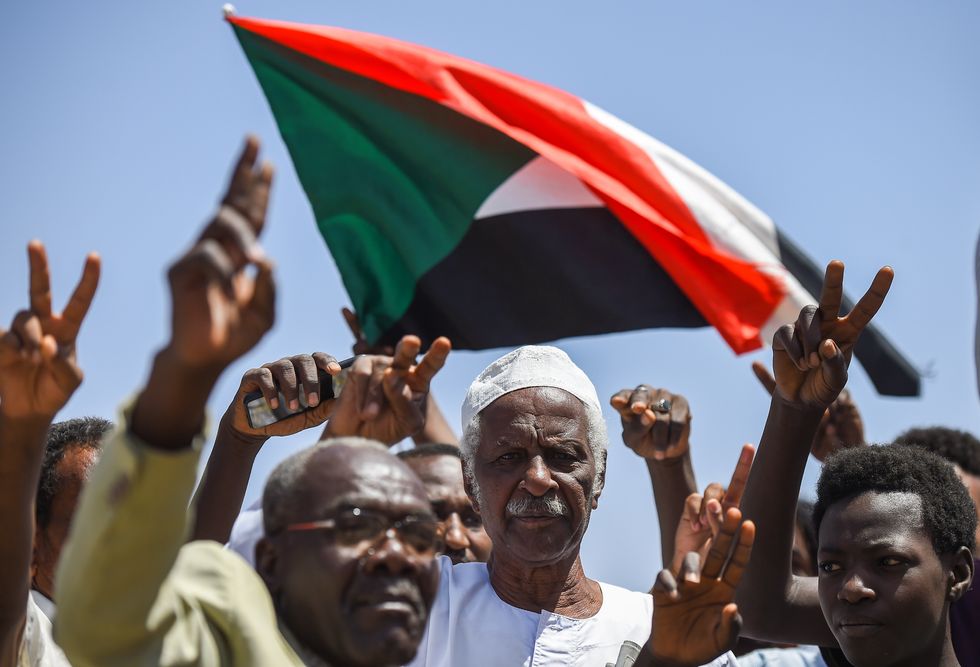 Sudanese protesters chant slogans and flash the victory gesture with a national flag at the protest outside the army headquarters in the capital Khartoum on May 14, 2019. (Photo by Mohamed el-Shahed / AFP) (Photo credit should read MOHAMED EL-SHAHED/AFP/Getty Images)

"We vow to our people that the agreement will be completed fully within 24 hours in a way that it meets the people's aspirations," says Sudan's top army General.

The Sudanese military and the country's opposition have agreed to a three-year transition period into full civilian rule, reports Al Jazeera.

Lieutenant General Yasser al-Atta told reporters on Wednesday, that a new agreement between the military and the protest group Alliance for Freedom and Change would be signed within 24 hours. "We agreed on a transitional period of three years," he announced. "We vow to our people that the agreement will be completed fully within 24 hours in a way that it meets the people's aspirations," said Atta.

The decision comes after the army seized power following the overthrow of long-time president Omar al-Bashir last month. While his ousting was viewed as a victory won by the people, many protestors rejected the military's decision to take over and plans for a two-year military-led take over.

Demonstrators continued sit-ins for several weeks at the army's headquarters in Khartoum following the announcement in order to demand a civilian-led government.

Scenes from Sudan last night as protests continued. Its now been announced that an agreement has been reached betwe… https://t.co/5U2oh7xxuV
— Samira Sawlani (@Samira Sawlani) 1557905213.0

As noted in The New York Times, key details around who will rule during the three-year time period are still unclear, and the country is still dealing with the effects of violence, which sparked up once again on Monday when four demonstrators were killed during partial negotiations.

Still, people on the ground are considering the announcement a major step forward in the fight to secure effective, democratic government in Sudan.