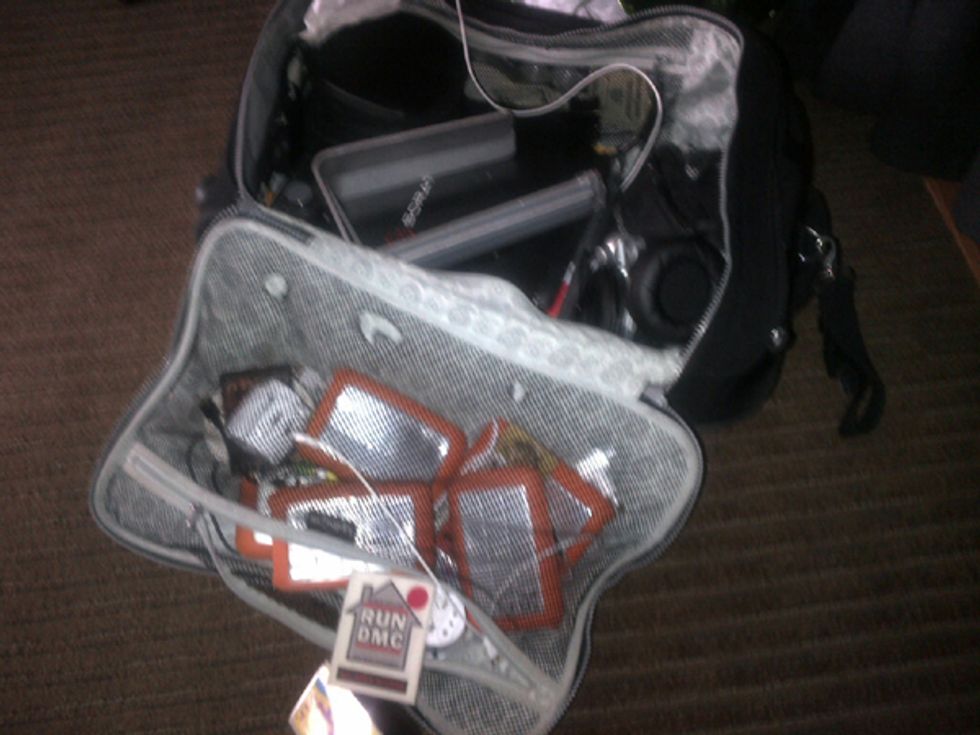 Questlove took the time to write these words on OKP about the passing of Soul Train host/producer Don Cornelius, we felt it fit to reprint for Don's incredible legacy and ?uesto's breakdown of his effect on African-American identity :

you guys see this bag?

this bag has NEVER left my side for the past 14 years. I deemed it imperative that i NEVER part with it. you can imagine the arguments i’ve gotten into with flight attendants over that bag. this bag is my blue blanket to my linus. i carry that bag everywhere cause the future is in this bag. and by the future i mean our past. and by our past i mean Soul Train.

its amazing timing that my arrival on earth and his greatest creative manifestation came within 9 months of each other. both symbolizing a new hope for urban america.

most won’t get it til now (especially now that he’s gone) but i pray that Don knew of the appreciation he had in all of us born after 1968.

you people will have to forgive me…im just kinda writing from the heart….sporadic thoughts tears and snot are spilling out and whatnot. im certain dream and toure and nelson will do his legacy justice in print….i just felt the need to write something.

i just wanna use my position to really let people know that next to Berry Gordy, Don Cornelius was hands down the MOST crucial non political figure to emerge from the civil rights era post 68. the craziest most radical thing of all is i don’t even consider Soul Train his most radical statement. yes the idea of the young black teenager NOT mired in legal trouble on the 6 oclock news getting camera time was a new idea to most…so of course the fact the U.S. really got its first vicarious look at our culture was amazing.

but the TRUE stroke of genius in my opinion was how Don managed to show US how important we were. which was NOT an easy task.

not by premiering the newest jam by james brown

not by focusing on the latest dance craze

not by the crazy outfits….

ill tell you how Don really made a radical statement. and he himself acknowledges it:

Soul Train had double duty, to not only produce a show, but they also had to provide ALL of the production for the Johnson beauty products commercials that was funding the show. often using the set and the soul train gang (they became soul train dancers in 1976) as lead actors.

ok ahmir so where are you going with this?

the genius of it all was THIS was the first time that black people were proud to be called AFRICAN.

psssh before 1971?—i mean on the real…til like the early 80s on some schoolyard insult game ish? if someone called you “african” that was the most insulting degrading lower than low “im finna f**k you up” type of insult.

i know right? why?

to control our mentality during the slave period we were taught we were the lowest of low.

to control us AFTER slavery during the jim crow era we were taught we were the lowest of low.

the first introduction to entertainment (of which we were allowed to participate) was minstrel entertainment an over exaggerated buffoon display of shame and ugliness that we STILL CARRY TO THIS DAY (minus the makeup) (hello hip-hop….but that is another piece altogether).

to say with a straight, dignified face that BLACK IS BEAUTIFUL was the RISKIEST radical life-changing move that america has seen. and amazingly enough for one hour for one saturday out the week, if you were watching soul train….it became contagious. next thing you know you are actually believing you have some sort of worth.

the whole idea of Afrocentrism in my opinion manifested and spread with Soul Train in its first 6 years.

i saw the impact it had on my mom and dad and how they let the impact trickle down to my sister and me.

i mean i was BORN into it: so i came in this world thinking every african american had it just like i did: some funky dressing, proud, knowledgable parents who since birth exposed me to every record known to man and who kept my crown (make no mistake, i’d cry “mommy cut it off the kids are teasing me!”) on my head as a symbol that one day i would be “a mighty leader”….lol

seriously, they were like “that afro is symbolic because we named you Ahmir and Ahmir means King and to be a King you must have a crown and to lead you must be knowledgeable!”

and with that…Soul Train was about maybe one of 5 tv shows i was allowed to watch on tv. if it was educational pbs or some other similar program then i was allowed but mostly it was all about Soul Train.

and of course watching it as a baby i had no clue Don was trying to program the minds of an untainted generation. hell i don’t even know if HE knew the grand scheme of things. but somehow we rode each other to glory.

once the vcr age came to be, i started religiously recording all the episodes. and back when i became a signed artist i crafted MANY a Dear Santa letter asking if there is anyway possible i can see an episode or two from my childhood.

don’s people never answered me back.

then my 1st trip to japan came.

got off the plane and noticed a weird liking some of the natives were taking to me. and how they all in their weird communication was trying to say they like my “soul train style”.

puzzled i was like “how do yall know that?”

my translator then explained how Don syndicated 100 classic episod—–

that was ALL she had to say: we were in INSTANT “take me to these tapes NOW!!!” mode.

my translator was startled like “where’s the fire?!” but i had to explain to her ALL of my memories were locked inside this show. and because of my limited tv viewing all the thoughts were still fresh in my head.

it took her about 12 hours but she found someone willing to dub all 100 epi$ode$ for me.

after that i was a man on a mission from god.

and EVER since that day i carried those VHS tapes ANYWHERE i went.

we had JUST started Voodoo and these Soul Train eps were proving to be a MIGHTY educational tool and a source of energy for us.

and day by day you saw and heard the results.

then i started sharing eps with Erykah and so on…

then this artist and so on…

and that artist and so on….

soon after once mini TB drives came into fashion i then started carrying around endless hardrives of Soul Train eps (i got about 400+) sharing with ANYONE within eyeshot a history of a people.

even my thursday night regular spot (Bowl Train at @brooklynbowl) is just an excuse for me to watch my all time favorite show on a movie screen.

Don has left a legacy behind that i will PERSONALLY carry on until i can’t carry anymore.

Soul Train to me is the GREATEST creation and inspiration of my life. i literally watch 5 eps a day just as mere background noise (the best roomate ever is a tv….this is why i cannot be a cat from brooklyn) i will NEVER EVER forget its powerful impact on education on pride on creativity on culture and on me.

i love you don.