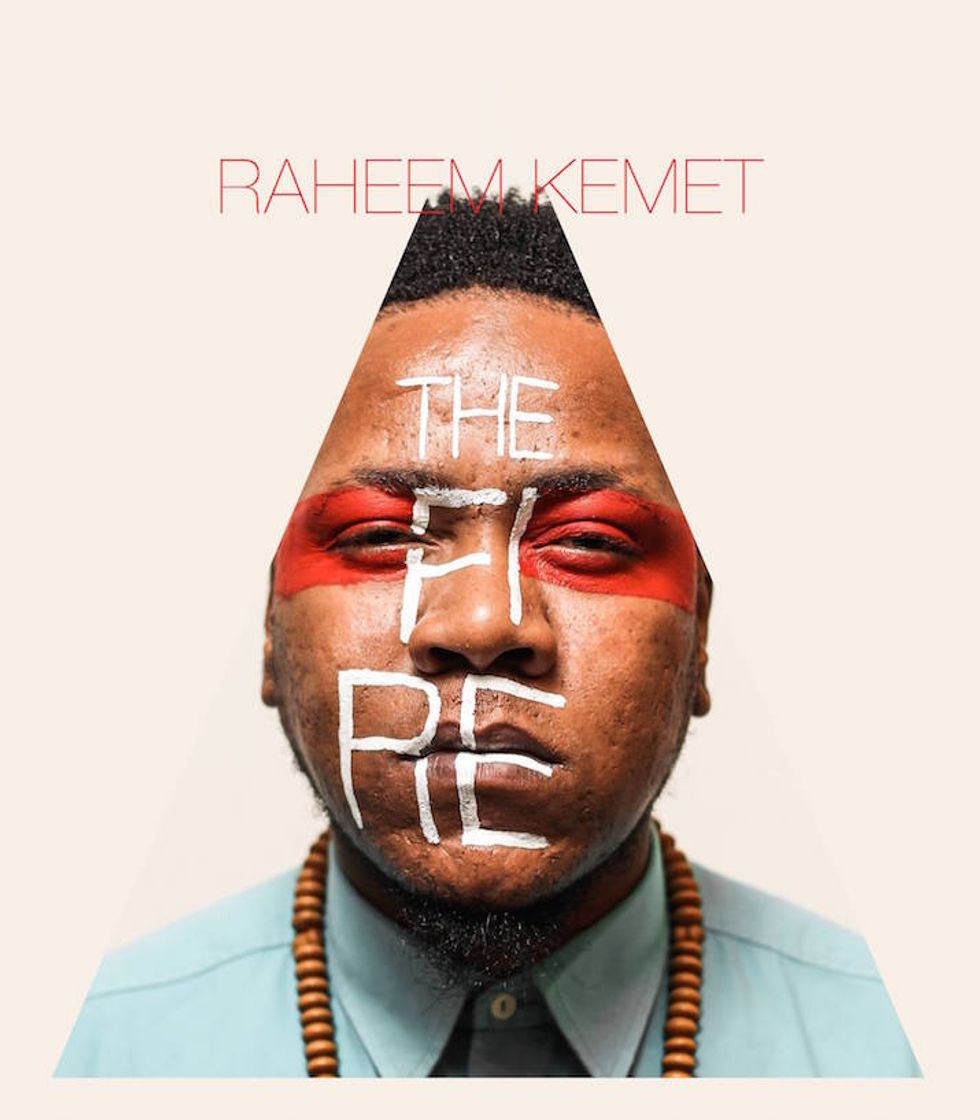 South African MC Raheem Kemet talks about the Durban scene and the genesis of his jaunty "The Fire" video.

Raheem Kemet is a long time fixture on the Durban b-boy, graffiti and conscious hip-hop scene, but not in ways that you would expect. As part of the hip-hop, jazz, rock fusion outfit Tree Houses On The Sea, he released 2009's The Book Thief LP, an homage and unauthorized retelling of Markus Zusak’s book of the same name that dealt with the Holocaust, which was only recently turned into a film. The Book Thief is a criminally under-appreciated work, as is most of Kemet’s sporadic output — this could be partially due to Kemet's shape-shifting nature or the fact that he just seems to be doing things for a whole different set of reasons. His new track "The Fire" is a funky, jaunty groove that sounds like summer in a million ways and is indebted to Outkast, the Durban bass scene, and plays like a celebration of New York street corner conscious hip-hop. We spoke to him about the track, the Durban scene, the genesis of his "The Fire" video and his new The Wind EP.

Roger Young for Okayafrica: The rest of Durban is deep in the gqom but this EP sounds like you dropped MDMA and mainlined the entire Outkast back catalogue, what's up with that, why you gotta be so left field?

Raheem Kemet: We didn't plan to sound different, we just wanted to create something that resonates within us, and in turn those who are on the similar wavelength would find lines of identification. I gotta say that I'm humbled by the Outkast reference because I'm a loyal fan of Andre 3 Stacks. I'm a child of the late 90s early 2000s so the style on The Wind EP came naturally. I was fortunate enough to tie up with a producer who could assist me with translating the perfect soundscape so to speak. Even though the flow and words are nostalgic there's a hint of future in 'em. I'm trynna bend time with my music.

It’s always been about feeling rather than jumping on to the latest fad. I adapted a more spiritual (not religious) approach on creativity, which orientates around gratitude and acceptance, so I often get surprised as to how perfectly things tie up at the end. This attitude also helps keep those perfectionist tendencies at bay that often disrupt the process and hinder a lot of artists from putting stuff out. I see what's happening around me in terms of the latest trends but I'm wired different, I gotta be true to my shit. If you fake it they'll hear it. I'm reppin my gully. There's life beyond the taxis but also keep in mind that there's different taxis for every gully.

OKA: In the video you’re dressed like some kind of 70s Black Panther revolutionary, and there’s a lot of graffiti going on, but the song is really happy, what’s that all about?

RK: Well if you listen closely the song is about rising against the grain, revolutionary in some way indeed. More like a warning saying 'We Occupy Here!'  "TV don't know us/ we've been on the underground/now we getting dappa with the get up flip it around" as said on "The Fire." Fashion trends can't silence us, we wear our hearts on our sleeves but they stay buggin on fabricated reality. With the graf, I just wanted to showcase different forms of expression. For many years graffiti has been my muse and still is. There's scrolls on these city walls.

OKA: You’ve been pretty quiet since Tree Houses On The Sea folded a few years ago, what you been up to?

RK: Yeah man, life happened. S/O to THOTS though! I've stayed writing and reciting at certain venues around Durban, experimenting with artists that inspire me. I had to get back to me, and to my essence. I've started a family of my own so I had to concentrate on that for a while, still am. Soul searching to find my purpose and what not. I've been doing a lot of collabs with artists like Veranda Panda, Icarus, Rain, The Nutscratchers and Mickey Madlove from the EDM bass circuits as well as getting into the underground hip-hop/soul scene for a bit and working with producers such as Dave Audinary, Myndphlo, Damascvs, Johnny Filter just to name a few. In 2014 I finally got an opportunity to feature on a production that orientated around the works of Sufi poet Rumi. I also did some activist work with my brother Ewok in solidarity with Palestinians who are victim to apartheid in Israel. Later in the year I was selected as one of the final 10 artists in the country for the Converse Get Out The Garage competition. It was a bit tricky because the performance part of the competition fell on Ramadan, so I had to sacrifice my performance for the greater good. Nonetheless a lot of positive came out of that.

OKA: Who is Myndphlo? "The Fire" isn’t on The Wind EP, what are your release plans for it?

RK: Myndphlo is one of those humble producers who stays chopping up soulful classics, boom-bap extraordinaire. We got together last year and just clicked, one of those God incidents. He was actually trynna get my wife on some of his beats at first but we eventually linked in the studio and the rest was history. I released extracts of The Fire EP earlier in the year, with the main single "The Fire" receiving a lot of love from the streets. I’m planning a succession of 4 EP's named after the 4 elements (Fire, Wind, Water and Earth). I will re-release The Fire EP in a month or so with 2 additional tracks to add to the arsenal. I wanted to work with different producers for each element giving the specific project a distinct feel to the next. I'm an eclectic and my wolf pack exerts similar energies.

OKA: How’d you put this track together?

RK: Well I got the beat from Dave Audinary a week before I left for one of my spiritual trips to Cape Town in December 2013. While I was away I started writing for it and recorded melodies on my blackberry as I came up with them. Then, as soon as I landed back in Durbs I vyed to his studio on the Nims and laced it in a couple of hours.

OKA: What’s the track about?

RK: The track is about keeping on and staying in the fight. There are so many musicians and artists alike in Durban and neighboring that the rest of SA has not seen yet, but in my books they have already made it by just staying true and evolving with their artistry. Then you also have the few who give up because they need a proper support structure in their lives...its hard out here bruv.

OKA: Is it as happy as it seems?

RK: Yeah it is, but listen while you move your feet, there's more to it.

OKA: Tell me about the video, who made it?

RK: The video was directed and filmed by Durban based director Mark Edwards, founder of Ilifindo. Yeah man, we wanted a performance based vid that also had the different elements which make up the urban street scene.

OKA: And how does it conceptually fit with the song? How do they mesh?

RK: It’s about art, yo. We just had to get the fam involved and just let everybody be.

OKA: Who styled the video?

RK: Haha, shiiiit we dressed ourselves hey. We got some help with gear from Converse, Starter, Blacksheep Clan, Rock Paper Scissors and I designed my own outfit for the performance scene inspired by eastern Bedouin culture with them harem pants. Everyone had a hand in dressing the scenes though, I gotta give a S/O to DJ Mickey Madlove for letting us jack his warehouse and showroom furniture for the day. There are similar spaces like this in Durban but most of the time we have to create it ourselves. I love what's been happening around the city lately with regards to bringing out the aesthetics in random spaces.

OKA: Who’s the afrofuturist lady on the car?

RK: Oh yeah that's Ummah Screaming Sun a.k.a. Apple. She's like a sister to me, my kindred spirit. She's inspired by Native American Indian culture; I had to have her dancing around "The Fire," meditating on our reign dance [laughs]. Good vibrations.