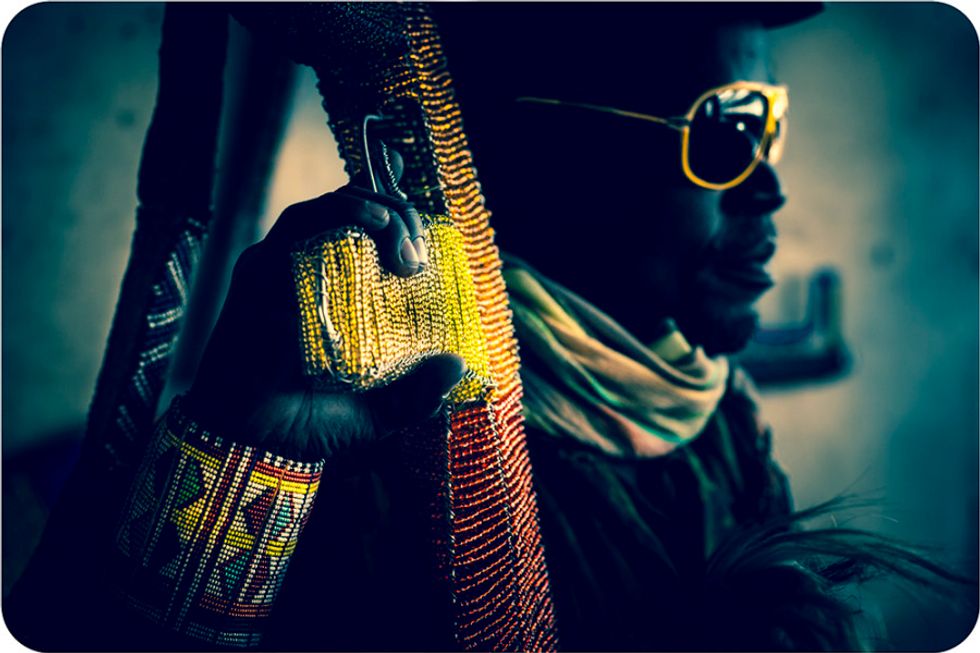 The debut exhibition (at least to our knowledge) from South African artist and filmmaker Ralph Ziman recently caught our eyes. Best known for his Venice murals and music video work with the likes of Toni Braxton and Michael Jackson, Johannesburg-born, Venice-based Ziman spent six months collaborating with Zimbabwean vendors in Joburg to create 200+ Shona-beaded replica AK-47s. The series of photos capture street vendors posing with the stunningly decorated weaponry. Ziman opened up about the impetus behind the project, which appeared initially as a series of murals in Venice:

"Part of an extensive series of works, this mural deals with the international arms trade and Africa: a trade that for the most part only goes in one direction. Into Africa. I had six Zimbabwean artists use traditional African beads and wire to manufacture several hundred replica bead/guns like AK-47s, as well as several replica bead/general purpose machine guns (GPMGs), along with the ammunition.

In response to the guns sent into that culture, the mural represents an aesthetic, anti-lethal cultural response, a visual export out of Africa. And the bead/guns themselves, manufactured in Africa, are currently being shipped to the USA and Europe. This bead/arms project provided six months full time work for half a dozen craftsman who got well deserved break from making wire animals for tourists. The completed bead/guns were the subject of a photo-shoot in crime ridden downtown Johannesburg. The subjects were the artists who made the guns, several construction workers who happened to witness the shoot, and a member of the South African Police Services who just wanted his picture taken."

Though some have interpreted Ziman's photo series as a critique of "Africa's dominant gun culture," it's important to keep the international nature of the arms trade in mind. In bringing his exhibit to the US, "the world's biggest arms exporter," Ziman goes some way to redirecting the one directional flow of the arms trade, inviting viewers to consider the original source of the guns on display. The exhibit features sculptures, installations and photos of the handmade guns. Ghosts is on display at L.A.'s C.A.V.E. Gallery Feb. 8th through March 2nd.