Respect Your Elders: A Family Reunites In The South After A Journey From 1950s Northern Nigeria 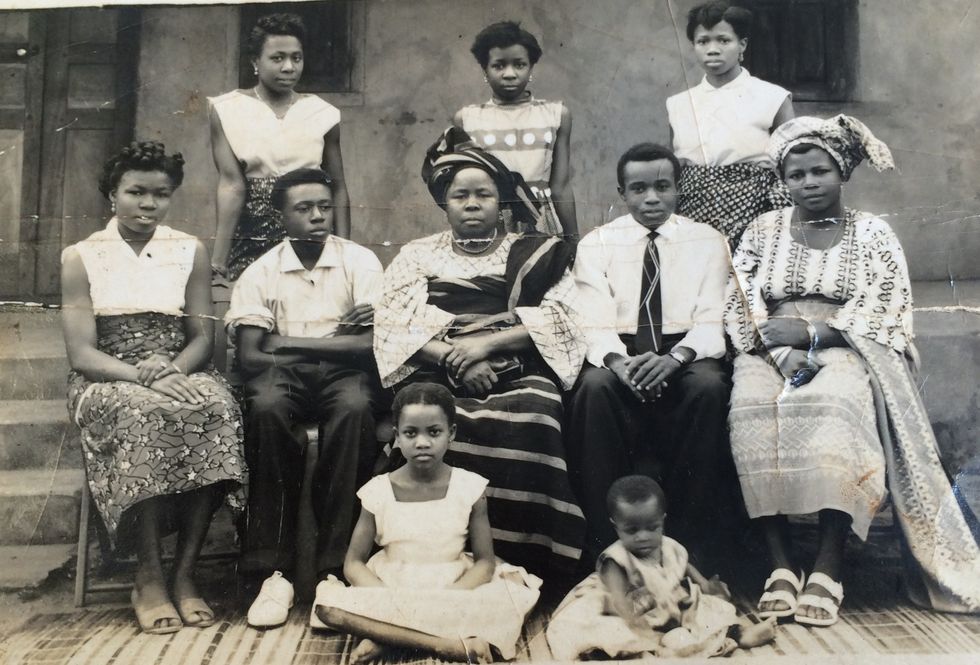 Our associate editor, Antoinette Isama, speaks with her mother about a family photo that dates back to 1950s Nigeria.

Our new throwback series, ‘Respect Your Elders,’ gives our team here at Okayafrica the opportunity to discover the stories behind old photos of our parents and family members. In our third edition and for Mother’s Day, our associate editor, Antoinette Isama, learns more about the story behind a family photo that includes her grandmother and relatives that was taken after her mother, Clara, returns to the village from Zaria, Nigeria as a pre-teen.

I’ve always been in awe of my mother and her life stories. She, like many other Nigerian parents of her and my father’s generation, have seen and lived through so much—from colonial rule to independence, to civil war and many coups, and finally attempts toward progressive democracy. My mother is also one of the many products of migration and assimilation that happened during the colonial era. Although her parents hailed from the south of Nigeria, she was born and raised in Sabon Gari, Zaria, in Kaduna State. She never failed to mention how well her parents fused the diverse cultures that surrounded them in the lives of her and her siblings.

She, like the many others of her generation, keep old photos like the one she shared with me close to recall what once was being so far away from home. I also believe that the experiences of those who come before you make you who you are—so it’s been imperative that I pick her brain and, in a sense, sit at her feet when these moments of wisdom come about.

Barely a teenager at the time, the photo above of my mother and her family dates to around 1958 in Ogbeobi, Onicha-Olona—her village in today’s Aniocha Local Government Area in Delta State, Nigeria. After my mother, Clara, arrives to her village with her siblings and mother from Zaria, her mother in turn just told them to get ready to pose in front of a photographer. My mother stands at the center of the picture right behind her mother. To Clara’s right is one of her older sisters, and a close relative to her left. Her other older siblings sit around their mother with her little nieces sitting on the ground.

For someone at my age, it was quite an adventure to travel from the north to the south of Nigeria. We first took two-day journey by train from Zaria to Enugu. One of my mom's half-brothers then met us at the train station and took us to his house where we spent the night. We continued the next day by bus to Onitsha—located right by the banks of the great River Niger. Our last leg of the journey was on a ferry called Erico, and we rode it across to Asaba. From Asaba we took another transportation that brought us to Onicha-Olona.

I felt both bewildered and content once I stepped into Onicha-Olona. I felt content because this was a rare occasion where I had the opportunity to spend time with all of my siblings in one place. I was also beginning to get used to being around the older ones who lived far away from me, hence my bewilderment. My siblings and I were also very excited to have our picture taken, because being photographed was a big deal back then. It took a lot for the photographer to do his job with a wooden tripod and box.

Despite our traditional garb in our area of Delta State being made of white, hand-woven wrappers and worn with coral beads, my mother chose to don aso oke, a fabric native to the Yoruba people. My father [who is not pictured] had a big interest in traditional woven wrappers made in Birni—an area within Zaria. As a side business, he had people on deck to weave these aso oke wrappers for him to sell.

Wearing a fabric that wasn’t familiar in our area at the time is indicative of being a southerner living in the north, and Zaria, like many other major cities in the country, was home to everyone, and it’s especially an integral part of who I am.

During my visit, I vividly recall my mother taking us to visit all of our relatives on both sides of our family that were in town for us to get to know them. My mother comes from the Ochei family, and at times it was even difficult to retain how I was even related to who I met because her side was so large in number. She also made sure to introduce us to my father’s side—the Ikediashi lineage. What was remarkable about that experience was her constant emphasis on the importance of family and how to stay connected. Subsequent visits solidified that act, and our family is still close-knit to this day.

My mother was humble and devout in her Catholic faith, though she said very little. Through her strong spirituality and her industrious nature, she was able, through her little trades, to make ends meet with my father. She was a giver—she would offer food to whoever walked in and was hungry. My mother taught me to accept people, especially those in need of a base to start off life.

My mother’s love was sacrificial led by action, just like any other African mother. Her love drove her to instill in my siblings and I true values, faith, our culture, and traditions.