Respect Your Elders: A Snapshot Of My Parents And President Obasanjo In A Bronx Apartment 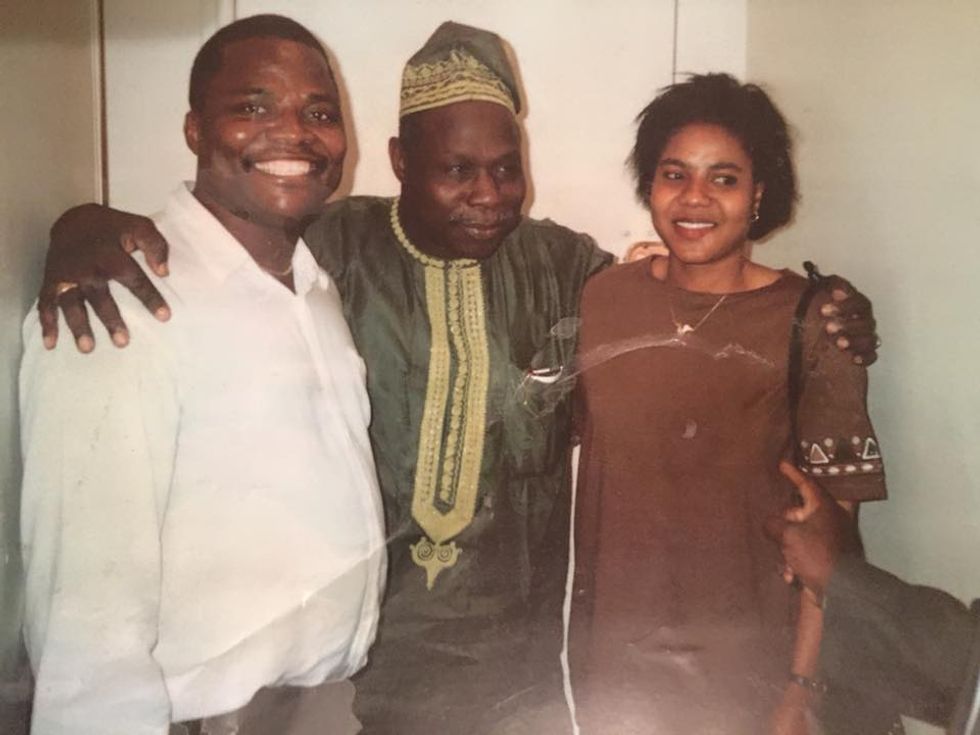 In the first edition of our new series, Abiola Oke asks his dad the story behind an old photo.

Our new Throwback Thursday series, ‘Respect Your Elders,’ gives our team here at Okayafrica the opportunity to discover the stories behind old photos of our parents and family members. In this first edition, our CEO, Abiola Oke, called up his dad, Dokun Oke, to find out more about a particular photo. The picture above shows his mother and father standing in a Bronx apartment with former Nigerian armed forces general Olusegun Obasanjo, who six years later would go on to become President of Nigeria.

We’ve all heard the quintessential phrase, “A picture is worth a thousand words,” but I actually felt that ring true once I asked my father a simple question about this vintage photo of himself, my mother and Obasanjo—What led up to that evening?

Out of all the things I learned during our conversation, my father reminded me that Moshood Kashimawo Olawale Abiola, also known as M.K.O. Abiola for short, is my namesake. A business aficionado in his own right, Nigeria’s June 12, 1993 presidential election predicted him the winner. According to my father, the military annulled the election, and their actions reverberated to the Diaspora. It’s suspected the military did so in order to maintain control, despite their promise to transition back into civilian rule.

My father then tells us more in our conversation below.

Dokun Oke: After the election, the military stopped counting the results, after about 20 states’ results had been declared. And I think they realized that Abiola would probably win the election and they stopped the collation. It was in that atmosphere that Obasanjo came to the United Nations and we met him and we wanted to know how far things were going in Nigeria.

Abiola: What was OBJ’s involvement in the election at that time? Was he supporting Abiola? Why did he come visit the United Nations?

Dokun Oke: OBJ one time tried to be secretary general of the United Nations and the then President Babangida was aiding him along, and so he was always around the UN, you know, probably canvassing for his position among the diplomats. He was probably here to tell the diplomats of other nations about what was going on in Nigeria. That was when we met him. We stopped for his audience, and there we invited him to my friend Yinka Adeyemi’s house in Co-op City.

And Mr. Adeyemi was working with the UN then if I'm not mistaken?

Dokun Oke: Yes, Adeyemi was a private contractor for the UN. He was working with Nigerian News Agency before he came to this country. Around that time, we had a newsletter called Stranded by Choice. It referred to the diaspora people who got stuck here and couldn't go back home, or who decided not to go back home. “Stranded by choice” referred to all of us.

It was distributed here?

Dokun Oke: Yeah, we were distributing them among ourselves. It was free. It was not a big paper. Adeyemi was the editor. I also had a column there.

Ah, you didn't tell me this!

I know, well, hopefully over time we can uncover more.

Dokun Oke: Think about that, "Stranded by Choice"

It's almost an oxymoron, a paradoxical statement...

My understanding is that most of your generation came here after the military rule, after the brain drain of the late 70s early 80s because the economy had crumbled.

Dokun Oke: There was never a time that Nigeria's economy was so buoyant that people would not leave the country. Everybody that came here had one economics story or the other, and people—you didn't come because we wanted you wanted to further your education—you were either here because you had no choice. There was not enough opportunity for you in Nigeria and you thought you could rush back here and make it there.

So I wouldn't say we ran away from military. When I came here there was a civilian government then. It was the military that took over from him and the military man that took over the civilian president, Shagari, was this current person. President Buhari was very tough, a disciplinarian, and everybody was running away. But I didn't run. We came for graduate studies. There was nothing like running. But, you know, that's what brought in "Stranded"—it was by choice. It wasn't like you couldn't go back.

Because you wanted to go back…

And the evening that you all had with Obasanjo, I think you mentioned something to me that Mommy cooked for him and he asked for?

Dokun Oke: Your mom cooked egusi and prepared amala for him and while he was eating, he dropped some vegetable on his clothes and he commended your mom like, "Well, that's the evidence of how palatable the soup was." In Yoruba culture, when you eat and you drop some food on your clothes, it's an evidence that you enjoyed the food.

So he asked a number of questions to the audience. How many people were in attendance that night?

Dokun Oke: We were more than 25 and the apartment was crowded. It was on the 13th floor. He came with one small car. We hired the car for him. And that was exactly what he wore. You would never see him in suit. No matter it was zero or minus zero degrees, that was what he wore. And he came with a secretary, a driver and two security officers—well armed.

Were there any heightened moments during the discussion?

Dokun Oke: I asked a question, and he said Ori e o da meaning, "your head is not correct." My question, was, "Mr. President, in 1979 when you handed over to Shagari, people thought you were rushing. You wanted to run away from power. Here is another president, which was President Babangida, who loved power so much that he wouldn't want to leave power. Which one would you rather choose—would you have wanted to stay longer or would you have wanted to go back as a civilian president? And if you want to go back, what did you forget in the state house that you want to go back and pick?" He laughed and he said Ori e o da. [chuckles]

He said, "I didn't forget anything and I'm not going back as president." The thing that we loved so much is that he was fighting for June 12, and the overall belief from everybody was that he was against June 12. Over the three hours that we had with him, he was fighting and telling us how we actionized June 12 and blah blah. And at that time the entire election had not been annulled. They just stopped counting. So, it was after our meeting that two days or three days later we heard that they actually cancelled the election. And he ran home the same day. So that's how I'll be telling you that at that time I don't think he was happy. He was actually fighting for June 12. The Yoruba people still don't forgive him. He always says he hates June 12 because of what happened in South Africa.

And one last thing—at that time you were in school at Bell's College in Nigeria. So, it was after the meeting, that we told him that you were in his school. That picture was taken in appreciation of attending his school. [chuckles]

It wasn't like we were so happy to see the ex-head, no. And then I was telling him that we were preparing to come back home too, and that all of you were already in Nigeria. And he asked us what we wanted to do in Nigeria and I told him, "What about farming?" And he said Ori e o da. [chuckles]