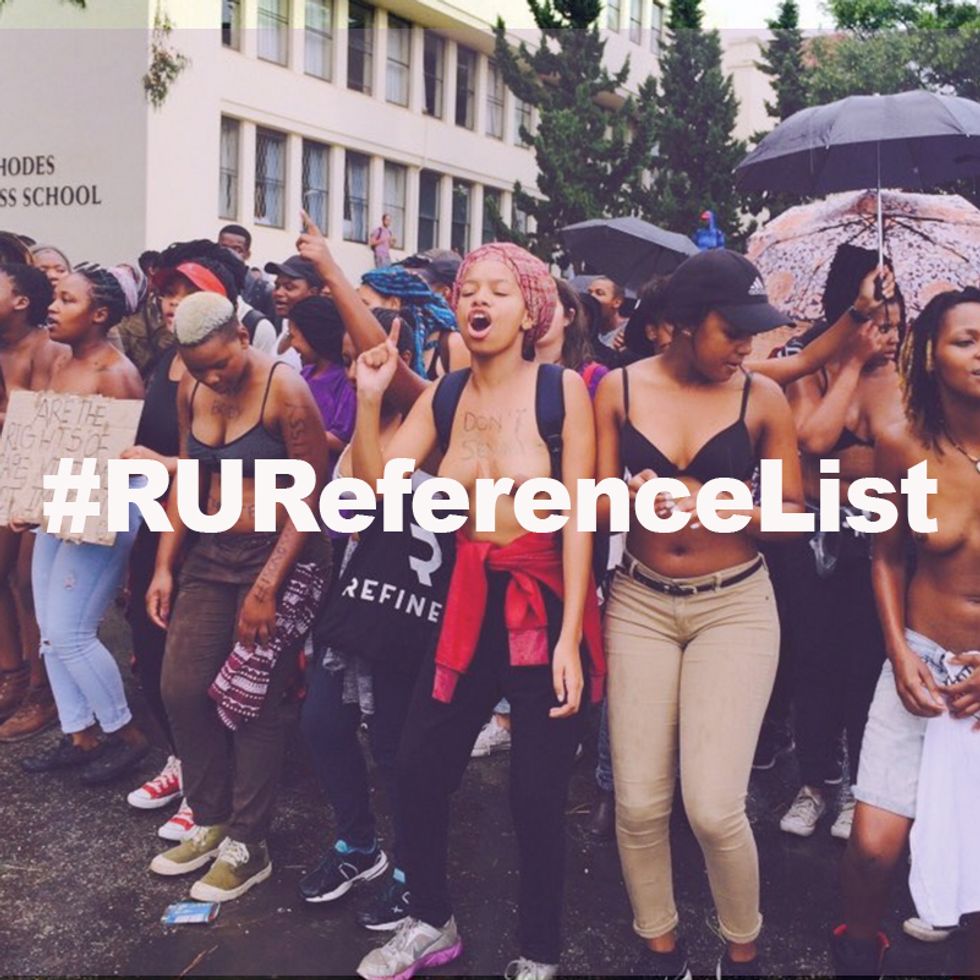 South Africa University Protesters at Rhodes University are calling for a change to the university’s rape policy.

A sexual assault and rape awareness campaign was initially launched by Rhodes students earlier this month under the name #Chapter212––a reference to the chapter of the South African Constitution regarding safety and dignity of the student body. The campaign began on April 11th when students plastered posters around the Grahamstown campus. The posters were intended to raise awareness of the university’s policies regarding sexual assault and rape on campus. They included quotes and statements accusing management of victim-blaming and ignoring rape allegations altogether.

Because when we report sexual assault, this is what we're told #Chapter212pic.twitter.com/3LfBKR3qY9

Rhodes Management told me this when I reported my rape. #RUManagmentSoFucky#Chapter212pic.twitter.com/YFt5rgbVBY — Angry Black Womxn (@sikhona_nazo) April 11, 2016

“Members of the movement state that management is accountable for perpetuating rape culture at Rhodes, and these discriminatory and victim-shaming policies must change,” writes Mishka Wazar for Rhodes' student news publication, Activate. The Campus Protection Unit (CPU) removed the posters the morning of April 12, though students continued to repost them around campus.

On Sunday, an unnamed group leaked the names of eleven alleged rapists at the university. The “reference list,” which was posted to the RU Queer Confessions, Questions and Crushes Facebook group, went viral under the hashtag #RUReferenceList. Shortly after the list was made public, students converged at the Steve Biko Buildings and proceeded to march to the various residences of the men appearing on the list. Protesters called for the individuals to face the crowd.

Students being addressed as two of the accused sit in the centre of the crowd. #RUReferenceListpic.twitter.com/2gO7jEKDCU

The protesting students also drew up a list of demands for the university’s management, which they handed to RU Vice Chancellor, Sizwe Mabizela. The demands called for changes to the university’s rape policy, including a request that the definition of rape be reviewed and the burden of proof removed from victims. The students said they would shut down the campus if their demands were not met.

The list of demands that was posted on the SRC page. #RUreferencelistpic.twitter.com/UQRSHsppmp — Activate (@ActivateOnline) April 18, 2016

The protests continued around campus this week.

On Monday, students gathered outside the RU law department, demanding to speak with the law facility’s dean about the rape allegations––a majority of the alleged rapists were law students.

The hashtag #nakedprotest circulated on Tuesday as some students marched topless throughout the campus.

Saddened by some responses to #NakedProtest. People talking about "indecency" and such. Where are you when indecency of rape needs policing?

The most powerful photos in 2016. The students are tired & can't take it anymore #NakedProtests#RUReferenceList ? pic.twitter.com/8nQ4R0nd9L

The situation turned volatile on Wednesday when police got involved. According to Reuters, five students have been arrested. Video footage shows one of the arrested students suffering from a panic attack while in police custody. Police used rubber bullets, stun grenades and pepper spray to disperse protesters.

RU has suspended activities on campus until further notice.

The sad irony is that the police are arresting people PROTESTING AGAINST RAPE & not those who are actually accused of raping. #Rhodes — Poppy Ntshongwana (@PoppyIsMyName) April 20, 2016

Yes!i am in solidarity with the students at eRhini university who fight to put an end to violence against women's bodies✊? #RUreferencelist — #NakedProtest (@thandiswamazwai) April 18, 2016

Little by little, day by day women are finding their strength and speaking out in ways that inspire us to be brave. #RUReferenceList — Kumnkani. (@sivusiwisa) April 17, 2016

Wow. #RUReferenceList is happening right now, and I have never seen anything so powerful in my whole life. Naming and shaming rapists! — marang setshwaelo (@marangdream) April 18, 2016

In awe of the brave womxn behind #RUReferenceList, we are watching proud and emboldened — Panashe Chigumadzi (@panashechig) April 17, 2016

What is happening at my alma mater is giving me goosebumps!so proud of these girls & boys - they are everything we were not #RhodesShutdown — Blair Waldorf (@Zam_Mkh) April 20, 2016