These 5 Clichés Are in Every Nigerian Music Video About Love 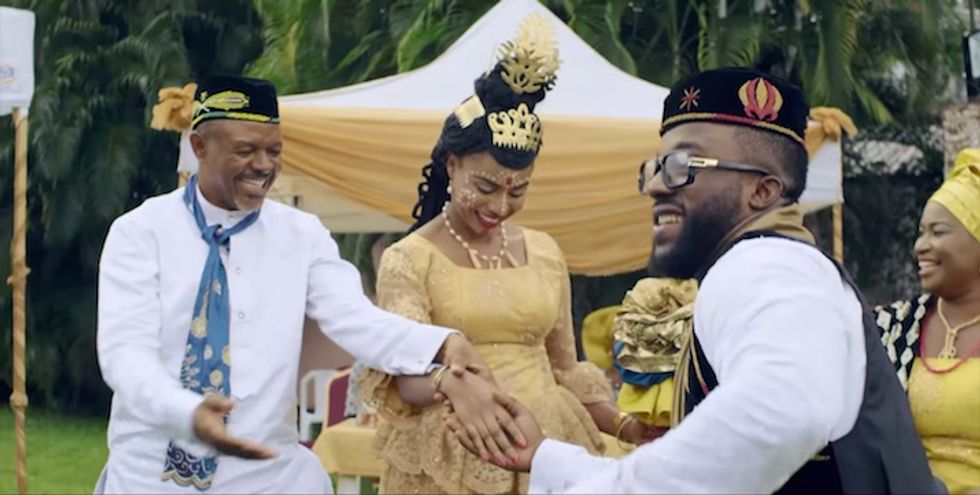 From the village to the wedding party, we take a look at some of the most common tropes used, or perhaps overused, in Naija music.

Nigerian pop music becomes ever-more obsessed with love songs over the last decade. While there's no doubt that Naija wedding receptions have benefitted from this wave, originality hasn't. Like any good sub-genre "Afrobeats love songs" videos have a few, err, recurring themes.

While we’re not saying that artists aren't doing a good job—most of these songs are dance-floor favorites—we are saying they could be a bit more original. After all, it never hurts to try something new.

Below we take a look at some of the most common tropes used, or perhaps overused, in Naija music.

The story typically follows that a young woman catches the eye of a man, and he sings and dances in an effort to win her love. The visual aesthetics for these videos are a central part of the plot, as they are usually set in villages with vast fields and plantain trees with their large green fronds on every corner. The women often have their hair in braids or plaits, and the men wear wrappers around their waist, or caps on their heads.

Occasionally, one can also expect to see some romance between a royal and a commoner, as we see in Flavour’s "Gollibe." The setting for these videos are often idyllic, and there is the sense that the love exhibited here is unpretentious, and far away from the trapping of city life. Indeed, there is a quite a bit of romanticization in the idea of a traditional self, and it is no surprise that this is one of the most popular ways artists choose to demonstrate the idea of an unadulterated, authentic love. Other examples of these videos are Mavin’s "Adaobi," Tiwa Savage’s "Ife Wa Gbona" and Chidinma’s "Kedike."

Handholding, elusive winks and note-passing in class. These are some of the all too necessary ingredients for a depiction of fresh, budding love in much of Nigeria’s pop music. While a slightly older song, Banky W’s "Yes/No " captures the giddy romance of junior high school, and echoes Chidinma’s resolve to stay with her own long-time love in her song "Fallen in Love." This is that kind of true love that prevails over time, and I am sure anyone who has had a childhood sweetheart finds these videos to be reminiscent of simpler times when we were told to face our books, but found ourselves reading love letters in the dark.

Is it even possible to talk about love without talking about boyfriends who have 4 different cellphone networks for 4 different girls? In this trope, Yemi Alade is queen, pulling out a string of songs such as the ever popular "Johnny," "Ferrari" and more recently, "Tumbum." Full of theatrics and playful humor, this trope often attempts to destabilize male power in relationships, and centers the woman’s needs. In an industry that is primarily male, Alade’s music does the work of interrogating the societal roles of men and women, and illuminates some of the material tensions in relationships.

Mo ni komole ma jolo! It would be impossible to speak about tropes without mentioning the almighty wedding party. Loaded with an iridescent assortment of aso-okes, elaborate beads, canes and of course, fistfuls of naira carpeting the floor, these videos depict the dopeness of primarily Igbo and Yoruba wedding ceremonies. These are the kinds of weddings we imagine ourselves at, with champagne glasses in our hands and naira stuck on our sweaty foreheads. Examples are Flavour’s "Ada Ada," Iyanya’s "Applaudise" and Wizkid’s "Pakuromo."

Is it a father waiting at the gate, or the skeptical mother who pretends you do not exist? Here, the agony and determination of separated lovers maneuvers around difficult parents, ethnic boundaries and social categories. Simi’s beautiful croons in "Love Don’t Care" elaborate on this matter, and we see it come up again in Chidinma and Banky W’s "All I Want Is You," Davido’s "Aye," and recently DJ Juls’ "Give You Love." The way it usually ends? True love wins, even when forbidden.

Debbie Frempong is a student of religion and politics living in Boston. You can find her tweeting @franticcurls on twitter.