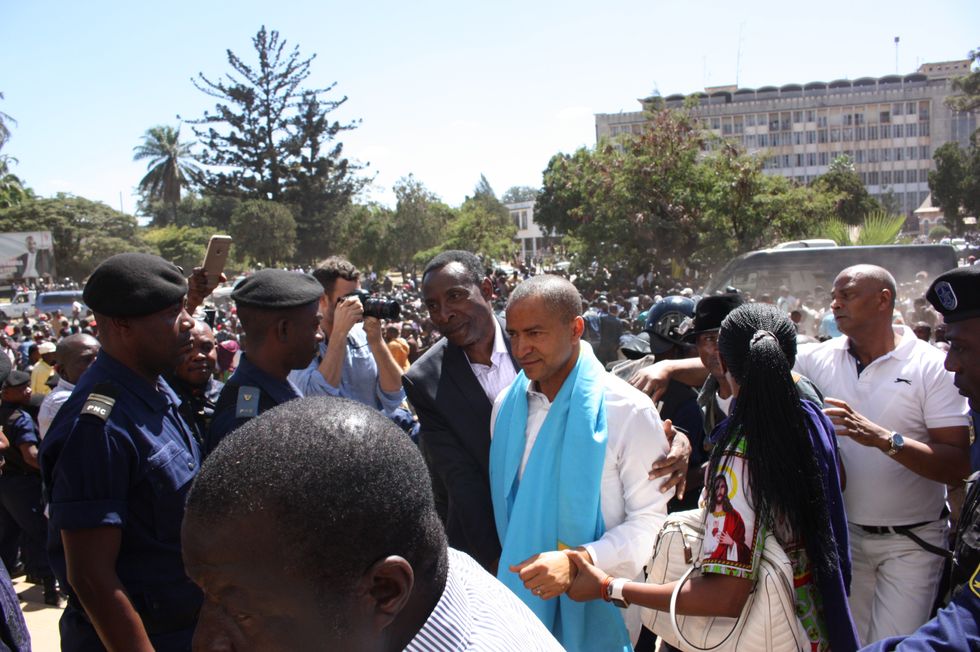 Thousands of people protested across the Democratic Republic of Congo today against President Joseph Kabila’s plans to stay in power indefinitely.

This follows the medical evacuation of the Congolese opposition politician Moïse Katumbi to South Africa, after an attack by security forces left him critically injured in the southeastern city of Lubumbashi.

Katumbi, a businessman and former governor of Katanga province is one of Congo’s most powerful politicians and was widely regarded as the biggest threat to President Kabila’s reign if and when elections were to happen.

Katumbi was flown to South Africa for medical treatment a day after authorities issued an arrest warrant for him accusing him of hiring foreign mercenaries in an alleged plot against the state. The G7, a coalition of seven parties have been holding discussions in the absence of Katumbi. Shambuyi Tshivuadi Mukwa Lukusa, Federal President of the Congress of Democrats for Social Progress told the local media: “This departure is not good. It looks like an open door to a forced exile”.

I am afraid that if the government keeps the aggressive acts against him and his supporters, the country risks falling into chaos - Didier Mukaleng Makal Kanteg
Katumbi went to the hospital after police fired tear gas at him and a number of his supporters outside the prosecutor's office in the DRC's second city, Lubumbashi, on 13 May. The former governor of the powerful Katanga province was granted permission to travel after he asked for conditional release covered by a medical certificate, saying he needed appropriate care abroad.

“He’s so popular even beyond Lubumbashi in other provinces of the country,” a local journalist Didier Mukaleng Makal Kanteg told Okayafrica. “I saw Moïse Katumbi at ‘Palais de la Justice’ when he has attacked. His brother was severely wounded in the face. I am afraid that if the government keeps the aggressive acts against him and his supporters, the country risks falling into chaos”.

The presidential election was supposed to take place in November 2016, but President Kabila—who took the office in 2001 after his father Laurent Desire Kabila’s assassination—looks unlikely to give up power after his second term that expires this year. The younger Kabila has won two disputed elections since he took power, and is constitutionally barred from contesting the poll. Katumbi has been nominated by seven opposition parties to be their presidential candidate in the elections expected in November, and urged President Kabila to stick to the constitution.

Violent protests erupted last year over fears that President Kabila was trying to delay polls, leaving a reported 42 people dead in clashes between protesters and the police.

In April this year, at a rally in Lubumbashi, an American security contractor, 48 year-old Darryl Lewis was arrested and been accused by the DRC's Justice Minister of being a mercenary sent to assassinate President Joseph Kabila. In a direct statement on the case, the U.S. ambassador strongly refuted the claim as false and pointed out that Lewis was unarmed when he was arrested.

There is a big risk of violence including the risk that Katanga might try to break away from Congo and declare independence.
Katumbi has defended himself by saying the accusations are aimed at derailing his campaign to succeed President Joseph Kabila in elections scheduled for later this year. Katumbi was governor of the south-eastern Katanga province for almost a decade. In September last year he broke ties with the ruling party when he accused President Kabila, his former ally, of wanting to stick to power.

“Katanga is the native province of Kabila, but the people here especially the opinion leaders in Lubumbashi lost the trust in him which means his power was weakened,” Mukaleng told Okayafrica “The main opposition led by Katumbi is from this region, and Katumbi made a remarkable economic transformation. People are aware of his sense of leadership and the difference that he can make in Congolese development. In case Kabila violates the constitution, as is happening in lots of African countries, there is a big risk of violence including the risk that Katanga might try to break away from Congo and declare independence.

After Congo was granted independence in June 1960, Katanga became an autonomous province. In July 1960, Katanga broke away from the new Congolese government, declaring independence, under the influence of their former colonial master, Belgium. Katanga is one of the richest and most developed areas of the Congo. Without Katanga, Congo would lose a large part of its mineral assets and consequently government income. Katanga reunited with the rest of the country after UN Security Council resolution to prevent the occurrence of civil war in the Congo.

As governor of Katanga, Katumbi’s popularity in Africa’s third largest country grew a lot over the last decade. A lot of this has to do with infrastructure investments during a period where the rest of the country was crumbling. Many Congolese are particularly proud of Katumbi’s investments the football team TP Mazembe which has gone on to win African Champions League titles under his tenure and finished second at the FIFA Club World, the first African team to do so.

“It’s a pride for Lubumbashi when we see our hometown soccer team winning in Africa and playing the big clubs in the world in Confederation cup, the team is successful because of Katumbi, he is ambitious, not only in sport where our club made unbelievable achievements under. Katumbi made extraordinary changes in the regional mineral mining and created lots of jobs in mining industry,” said Mukaleng. “President Kabila and his surroundings are damaging his efforts because he succeeded to unite people across Katanga”