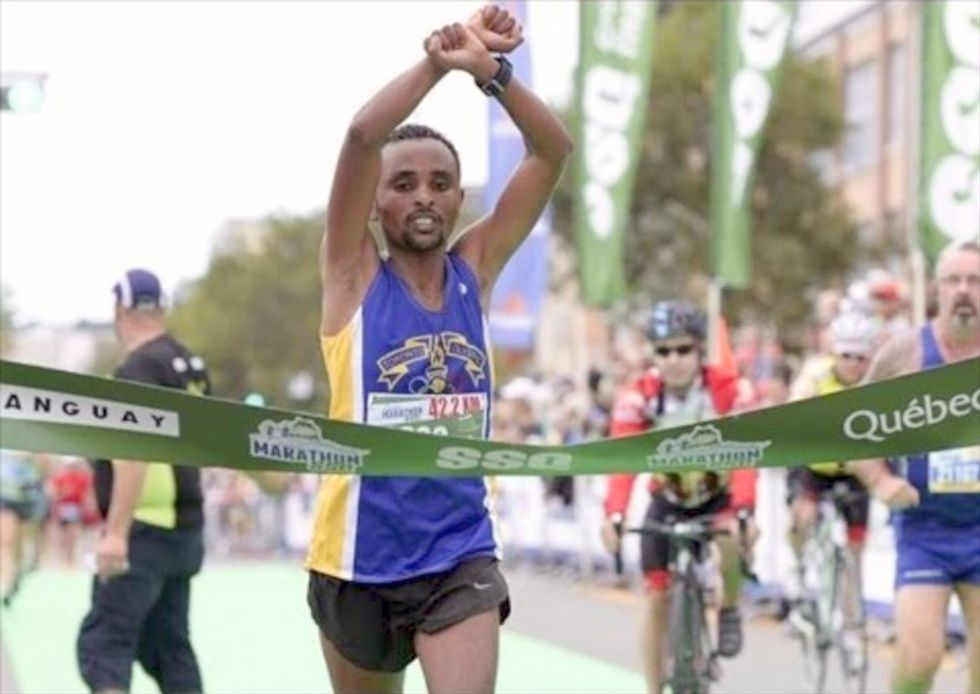 Ebisa Ejigu of Toronto gestured in solidarity with the Oromo people as he won the SSQ Quebec City Marathon Sunday.

Another Ethiopian marathon runner has taken a cue from Olympic silver medalist Feyisa Lilesa a week after he crossed his arms above his head, clenching his fists, as he sailed past the finish line in Rio, BBC reports.

The controversial gesture signaled Lilesa’s solidarity with his Oromo people, Ethiopia’s largest ethnic group protesting mistreatment by the government, but has prevented the runner, who now fears for his life, from returning home, and has generated more than $158,000 in crowdfunded donations.

Ebisa Ejigu, who is Oromo originally from Addis Ababa and established in the Canadian running scene, gestured like Lilesa did, finishing first at the SSQ Quebec City Marathon in 2:30:40, Sunday.

Since November 2015, more than 400 people have been killed by the Ethiopian government’s security forces as part of protests initially incited when the government began extending the municipal boundary of Addis Ababa, threatening the land rights of the neighboring Oromo people, Human Rights Watch reports. And according to BBC, an additional 100 people have been reportedly killed in August.

Ejigu’s gesture builds on the momentum of the Oromo protests that have been receiving more international attention since Lilesa’s defiance on the world stage.