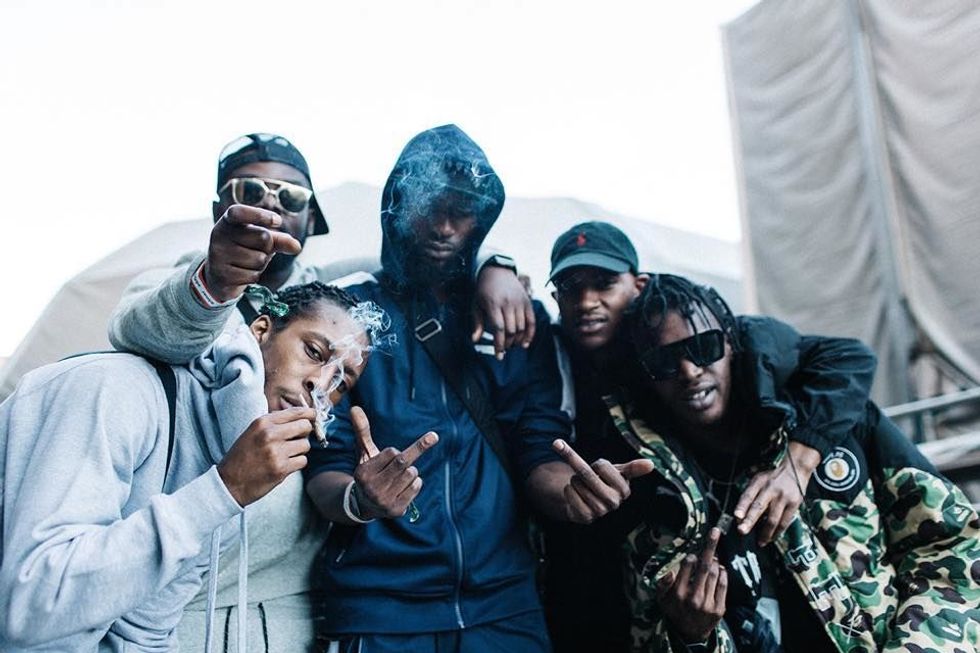 UK rap has been knocking on mainstream doors for a few years now. The growing popularity of artists like Skepta and Giggs means that with some doors, if you have a unique voice and a story to tell, you don’t need the key anymore. Section Boyz have that voice.

After winning the 2015 MOBO award for best newcomers and selling out countless shows—including a surprise Drake appearance at one which caused a frenzy both at the event and on social media, the South London crew return with their new 19-track mixtape, Soundcheck.

Inch, Littlez, Sleeks, Knine, Swift and Deepee set the mood with “Step In.” Gritty and raw from the off, you can imagine the mosh pits forming to this track at a Section Boyz performance. You can hear the continual wheel-ups and crowd mayhem when the beat drops, hence the project’s title.

Section Boyz have tapped into youth sub-cultures and created their own lane and cult following independently. With a range of producers including RudeKid and Pinerobeats, Soundcheck is fast and punchy.

The sound is distinctly British as the group rap with supreme confidence, talking street tales from a London perspective with London slang riddled throughout—“how can a gal be peng and try walk past me?” These guys are unapologetically in your face and they’ve demonstrated skill by intertwining six separate voices to display great chemistry with a range of flows on this project.

‘I Like’ is an outstanding song produced by Heavytrackerz. It helps reiterate where Section Boyz are and where they want to be. They make music you might not fully understand unless you’re from the ends. Soundcheck is ends music. Reality rap. Representative of a lost generation and a perfect example that the UK isn’t all about afternoon tea and biscuits—and the world is finally listening.

Section Boyz know they don’t need endorsement from the industry elites. After the success of their anthem “Lock Arff” and fast tracking to this mixtape, it’s evident that Section know how to make a banger. “Mee Too” sounds horrific. When I say horrific I’m picturing tragic scenes on a dance floor when Section perform this one. I feel sorry for other acts that might perform on the same bill because they’ll get murdered. This is the second Heavytrackerz beat to cause an impressive stir.

The abundance of raw energy is manifested throughout the Soundcheck journey—“go to the meeting with my hood up”—as is their confidence, which borders on playful arrogance at times. The group went up to collect their MOBO award wearing tracksuits. They’re comfortable in their skin and determined to show the world they can be successful by just being themselves.

Consistency is challenging on a project with this many tracks. Especially with so many group members bringing a range of ideas to the table. Soundcheck struggles with variation during its second half and can sound slightly incoherent. However, “Inna” does its best to keep the listener awake as Section depict a ‘world is yours’ mentality with distinguished flow and delivery over an infectious Young Chencs production.

The most intriguing aspect of Section Boyz' journey is their almost cult status within their community. Too many artists are quick to ignore the level they were raised on and head straight to the top by creating music that doesn’t represent them or their people on that ground level.

This crew are confident enough to feel they can represent themselves the way they want whilst remaining grounded. As long as the mainstream continues to highlight very limited voices for the oppressed and struggling people of the UK, those people will always seek a resonating voice wherever they can.

Ever since Skepta mentioned them two years ago on Hot 97 with Peter Rosenberg, more and more people have been sitting up and taking note. Along with the colossal success of Stormzy’s debut album, we cannot ignore the fact that independent, voices for the voiceless in music are currently on a rapid locomotive that won’t stop, even when it reaches its destination.

Section Boyz have their tickets and they’re on board.