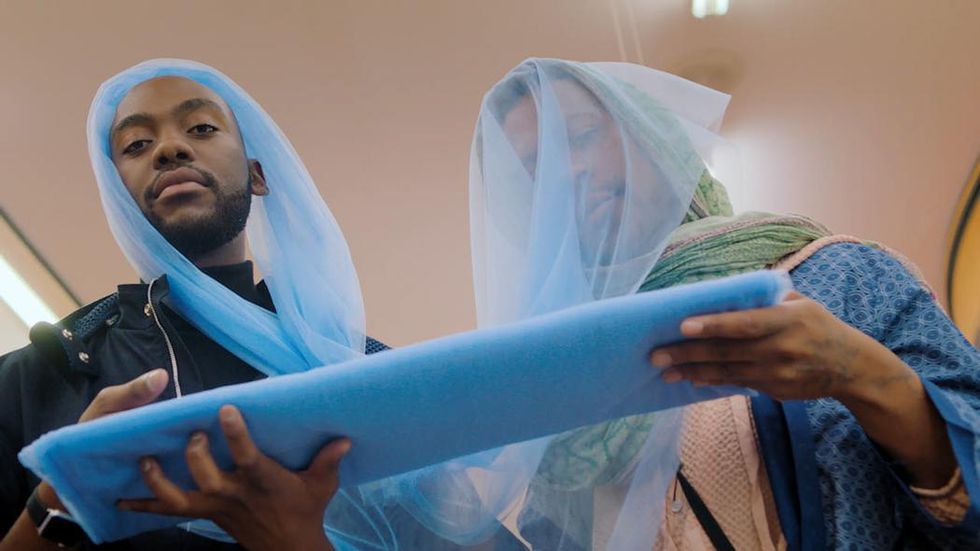 A new generation of LGBTQI artists in South Africa are at the forefront of a cultural movement that's changing everything.

If it were true that groundbreaking beauty and creativity are all it takes to have one's humanity fully recognized by the world, then the queer South African artists featured in the new Vice i-D documentary, Out of This World,would be free to love who they choose and their lives would not be the daily acts of courage that documentaries are made of. But that's not the world we live in. As it stands, the LGBTQI dancers, fashion designers, painters, and performance artists of South Africa are using an otherworldly mix of identity and style to create a movement that is defiantly fresh and uniquely South African.

Narrated by New York based rapper, performance artist, and activist Mykki Blanco, Out of This World, traverses South Africa as Blanco follows the creatives of the Born Free Generation (the generation born post-apartheid) who are pioneering a new cultural queer movement. For those who are familiar with the 1990 documentary Paris is Burning about the queer ball scene in NYC that was a hotbed of new ideas that nourished a community, the scene in South Africa seems familiar. But on closer look, one sees that there are marked differences.

For one, not all of the artists who were profiled have been rejected by their communities. Fashion designer Rich Mnisi spoke about the large role that his family plays in the creation of his designs.

Join me in my new film series where we together can travel meeting Queer artists & communities all over the world.https://t.co/UZSCpzow6rpic.twitter.com/VdCxpPer3G
— MYKKI BLANCO (@MykkiBlanco) October 8, 2017

"My family is so supportive. They all put in their two cents. Everyone wants to put in a suggestion!", he says in the documentary. Mnisi also add that coming out to his mother was simply a matter of introducing her to his boyfriend.

And there are balls like there were in NYC in the late 80s and early 90s, but there are also events called "Cunty power" ("cunty," as in cunt) parties thrown by the performance art duo, FAKA.

At the balls, there's a bit of the drag show vibe, but there are also full on performance art pieces. In one memorable sequence, Blanco does an extended performance piece where he rips off his wig and fiercely bites it, shaking it between his teeth, and glaring at the audience.

But the doc is full of the tenderness of queer folks acknowledging each other's existences and the raw urgency of friends coming together to make art. The sequences where the artists collaborate and speak about the necessity of creating a new queer narrative form the crux of the documentary.

"Queer erasure is a terrible thing. Our queerness is the reason we are creative. it's not just a side thing, like 'he's an amazing artist who happens to be queer.' No, we are creative BECAUSE we are queer," Fela Gucci of FAKA says.

With the courage that creativity and queerness demands, these artists are carving paths that can't be ignored. Check out the documentary on Vice i-D to see for yourself.