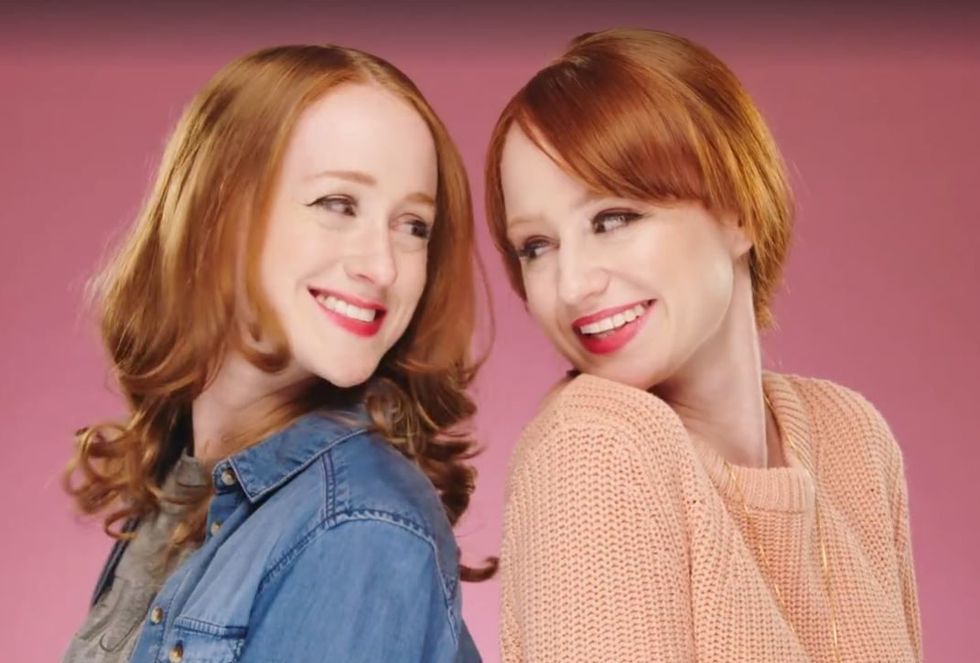 Shea Moisture's new ad caused an online uproar as it neglected to truly be inclusive and include black women with kinky hair.

In case you're wondering—yes, I'm shaking my head along with you.

Shea Moisture, a beauty brand that many know to be a pioneer of putting the needs of black hair and body care first, is currently under fire for a recent ad they launched on Facebook last week.

Somehow the brand went from this:

And folks are not happy about it.

So Shea Moisture CEO said they had to broaden their target market because the competition was high .

"HEY! We want to use Shea Moisture too!" pic.twitter.com/9qfoGBKZAf

Feel free to use this gif for all your Shea Moisture dragging purposes and needs pic.twitter.com/vnqtvIXA9F

Shea Moisture? The only shea butter I acknowledge is from the Africans on 125th

I'm confused at why getting white money in hair care is important. Black women spend BILLIONS. The first self made millionaire made her

I get #SheaMoisture wanting to diversify the product line. But fam, if a core, high-spending demographic made you, develop an adjacent line.

This is not the only time Shea Moisture has had to quell the flames of controversy around their products and brand. Two years ago, it was speculated that the UK and US formulas of their Coconut and Hibiscus Curl Enhancing Smoothie were different, and they since clarified that the changes are due to "unique climate conditions."

Just earlier this month, more disappointment swirled around the brand when a hair model interacted with representatives of Shea Moisture at a hair expo in Florida that featured other natural hair brands including Carol's Daughter.

"When [Raquel] Savage went over to the Shea Moisture booth to talk to its representatives — one white woman and one light-skinned, racially ambiguous woman — the latter woman told her Shea Moisture is not a “black” company, but rather a multicultural company that is very diverse," Morgan Jenkins reports for Racked. "The transformation of marketing natural haircare lines is a strong testament to what black consumers gain and lose when their beloved products became a part of larger corporations — “mainstream” can be a loose euphemism to erase blackness altogether."

This backlash then prompted Richelieu Dennis, the CEO and founder of Sundial Brands, to emphasize in an interview with Hello Beautiful that Shea Moisture prioritizes the needs of black women:

It's one thing to want to expand your brand, but it's another to totally go about it by erasing the very people who helped elevate your brand—black women. If it weren't for word of mouth, the black women on YouTube (who already don't get enough credit) who review Shea Moisture products and our coins, Shea Moisture wouldn't be where it is today.

But since the people have spoken, Shea Moisture has responded.

Here's what they had to say:

Wow, okay – so guys, listen, we really f-ed this one up. Please know that our intention was not – and would never be – to disrespect our community, and as such, we are pulling this piece immediately because it does not represent what we intended to communicate. You guys know that we have always stood for inclusion in beauty and have always fought for our community and given them credit for not just building our business but for shifting the beauty landscape. So, the feedback we are seeing here brings to light a very important point. While this campaign included several different videos showing different ethnicities and hair types to demonstrate the breadth and depth of each individual’s hair journey, we must absolutely ensure moving forward that our community is well-represented in each one so that the women who have led this movement never feel that their hair journey is minimized in any way. We are keenly aware of the journey that WOC face – and our work will continue to serve as the inspiration for work like the Perception Institute’s Good Hair Study/Implicit Association Test that suggests that a majority of people, regardless of race and gender, hold some bias towards women of color based on their textured or natural hair. So, you’re right. We are different – and we should know better.

Thank you all, as always, for the honest and candid feedback. We hear you. We’re listening. We appreciate you. We count on you. And we’re always here for you. Thank you, #SheaFam, for being there for us, even when we make mistakes. Here’s to growing and building together…

Since releasing this statement, it seems that the ad on Facebook has yet to be deleted.