Op-Ed: What Sho Madjozi Taught Me About Fearlessness 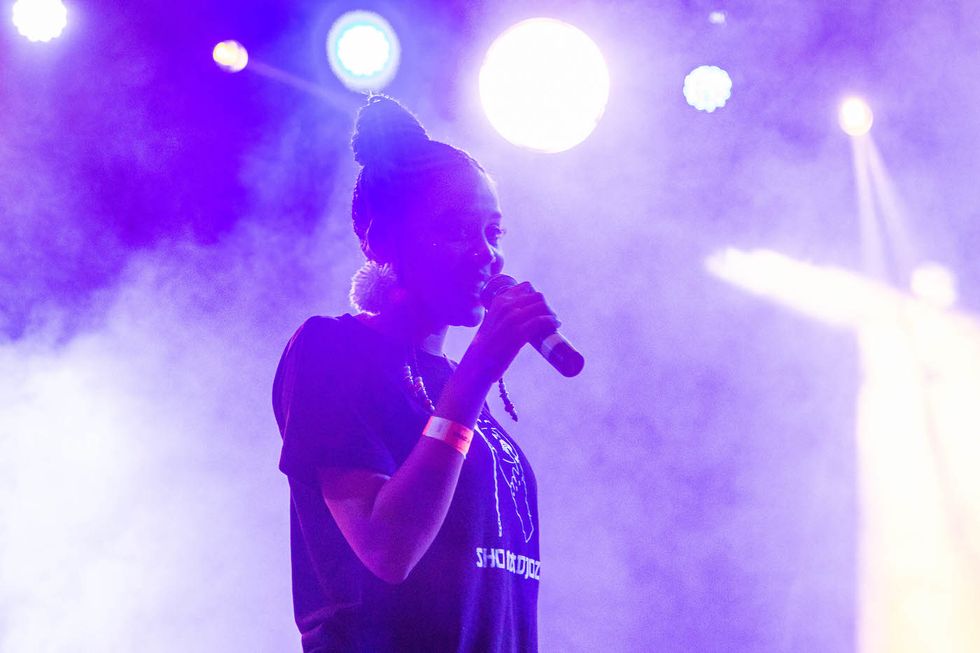 It's mid-2017, and I'm contemplating moving back home. It's a Friday, and the rain is coming down in sheets on the small Victorian house I share with two friends in Observatory (a small suburb in Cape Town). I'm without money for electricity, transport and short on food.

I've been thinking about my name a lot in the past few months—what it means, why my father gave it to me and how, at 26, I still struggle to pronounce it properly. This is when I first meet Sho Madjozi.

While absentmindedly listening to songs on YouTube, "Dumi Hi Phone" breaks out. It's the first time I've seen or heard anything like it: the gqom beat over the machine-gun "XiTsonga" flow, the brightly colored xibelani skirt with the Nikes and brightly colored braids. I ask myself who the woman on screen is, how long I've not known about her, but mostly, I ask myself where she'd been in my teenage years.

"Home" (and its associations around identity) has always been a word devoid of any particular meaning for me.

When people ask, I have always told them I'm Venda with nothing but that stated noun as proof. I don't speak the language (in fact, during my teenage years, I secretly resented my ethnicity), and last year was the first time I set foot in Tshaulu, the village where my father grew up. The reasons for this are as varied as they are complicated.

In The Lab: Sho Madjozi on Poetry, Gqom, and Upcoming Album

My father left Limpopo three decades ago in search of a better life in Johannesburg. As a means of survival, he learned as many languages as his tongue could wrap itself around, and when he met my mother, who speaks IsiZulu, and is from KwaZulu-Natal, they raised my siblings and I as IsiZulu-speaking (Johannesburg's lingua franca).

Still, my father carried pieces of "home" with him and tried to pass them on to us. On rides to school, he would play one of the many volumes of Thomas Chauke's "Shimatsatsa" series or works from Penny Penny's voluminous artistic canon. And, after the passing of both my paternal grandparents last year, my father has been making a renewed effort to get me and my siblings more attuned with his side of the family, its customs and its geography.

I suppose this is what stirred up so much emotion when I first heard Sho Madjozi's "Dumi Hi Phone."

Born Maya Wegerif, Sho Madjozi is also an artist of hyphenated identities. Born in Shirley Village, Limpopo to a white father and a black, XiTsonga speaking mother, she spent her childhood traveling the continent (she's lived in Dar es Salaam and Senegal). Before her international acclaim as a millennial-XiTsonga star, she had a stint as a poet whose work also spoke candidly about identity.

"When I came out, nobody was doing what I was doing," she told local newspaper The Star last year. "People focused more on that. It wasn't like there was already a Tsonga guy rapping on gqom. What was at the forefront was me rapping in XiTsonga, full bars, not dropping in words here and there."

What Sho Madjozi represented for me was a brand of fearlessness that had eluded me in my teenagehood. Here was someone so self-assured, so unapologetically XiTsonga in both her music and outside of it. In a country where tribalism pegs both TshiVenda and XiTsonga people at the bottom of the totem pole, Madjozi's artistry dared to say "we are more than the sum of your stereotypes."

The second time I meet Sho Madjozi is in Cape Town in July 2018. This time it's for real. She's wrapping up the recording of her debut album Limpopo Champions League at Red Bull Studios, and has roped in veteran singer, songwriter and producer RJ Benjamin to help with her studio sessions. I catch her on the last day of recording. She's visibly tired and has a plane to catch.

Sho Madjozi at Hipnotik Festival in 2016. Photo by Sabelo Mkhabela.

In the fifteen or so minutes that we chat, she tells me she's putting down the finishing touches on the album, and that it would still feature her characteristic blend of gqom and Shangaan disco. We also discuss the time a recent Instagram post from a fan: a father who posted a picture of his daughter in a xibelani and how much of a fan she is of Madjozi and everything she represents.

By now she's already performed at Afropunk Johannesburg and is on her way to the festival's Brooklyn show. "Dumi Hi Phone" was followed up by "Huku," possibly the first and last, gqom-inspired hit written and performed in Swahili.

For my part, I have been dreaming of home with an increasing regularity. In this one recurring dream, I'm in an anonymous part of my father's village, surrounded by what I imagine to be distant relatives. The blue is pulling away from the sky and I'm trying to explain something in a combination of broken Tshivenda and IsiZulu. At some point, my tongue feels leaden as I try rolling it around a certain word to no success. The tongue is a muscle that acts out of memory. It can't remember what it never knew in the first place.

Sho Madjozi's music remains a regular soundtrack to my search of home. "Ro Rali," the opening track on her debut album has the thump and candor of a traditional Shangaan disco track (the kind my dad used to play when driving my brothers and I to school). "Idhom" is another blend of gqom and XiTsonga rap in the vein of "Dumi Hi Phone," and songs like "Kona" appropriate the candor of Shangaan electro without veering into the realm of pastiche.

I would be remiss to mention Sho Madjozi without the artists who paved the way for her. The Shinyori Sisters laid the aesthetic and musical blueprint she's now reconfiguring and artists like Esta M (widely referred to as the Queen of Tsonga disco music) were championing the genre long before Sho Madjozi ventured into music. Still, her continental and worldwide success has given me a renewed impetus to find home—whatever that word will eventually mean to me.