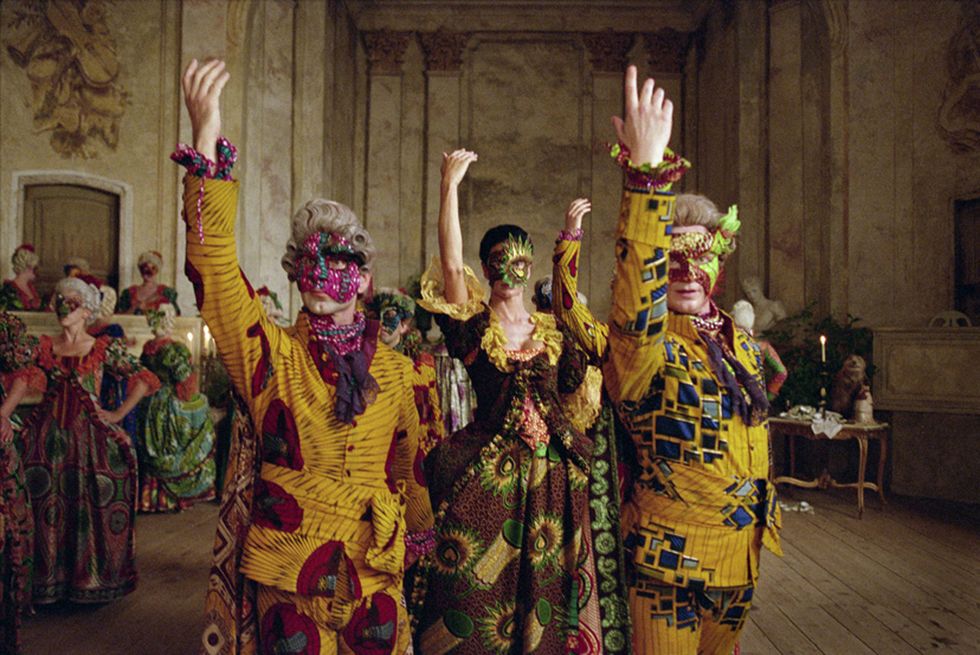 At the Smithsonian, six African artists use the body to challenge our understanding of time and whether it must always move forward.

In Senses of Time: Video and Film-Based Works of Africa, a new exhibit at the Smithsonian National Museum of African Art, six artists use the body to challenge our understanding of time and whether it must always move forward.

The exhibit, which first opened in December at the Los Angeles County Museum of Art, features artists Yinka Shobinare MBE of Nigeria, Sammy Baloji of the Democratic Republic of the Congo, Theo Eshetu of Ethiopia, Berni Searle of South Africa, and Moataz Nasr of Egypt. The Smithsonian edition, which opened May 18, adds Sue Williamson, a South African artist and activist.

Williamson’s There’s Something I Must Tell You pairs apartheid women activists in conversation with their granddaughters, who are of the born-free generation, in effort to “connect, imagine different eras, and contemplate the tensions between personal and political time,” the curators describe. The conversation topics range from remarkable—stories of incarceration and exile, to the lighthearted—a grandmother’s disapproval of blonde hair.

The work is projected across six screens and the women appear in separate screens to underscore the generational divide. In one screen, still-life photographs of the activist appear and disappear as she speaks. Yet, in a different screen video shows the granddaughter with subtle movement—a slight breeze moves her blouse or she gives a hardly-noticeable gesture.

She’s not in full motion, yet. The immobile activist and pensive descendant hint that the newer generation’s narrative is still being written. It hints also at the readiness of the next generation to take on from the past.

Given South Africa’s recent uprisings, this point is especially relevant.

At the artist talk, Williamson commented that at the time she created this artwork, the born-free women had a hopeful outlook of South Africa. But she now wonders whether, in the aftermath of movements like #FeesMustFall and #RhodesMustFall, their patriotism has dulled. This recycling of generational activism is the main theme of the exhibit: that time is nonlinear and relapses.

In one exchange the elder says, “[The] future belongs to the youth, to which her young counterpart responds, “I agree.”

Nasr looks at how identities are shaped by the forces of political time, and in the case of his artwork, the government of Hosni Mubarak. In another example of time relapse, the artist was unable to attend the artist talk due to a revoked passport, a resurfaced restriction even in the aftermath of Mubarak regime.

Eshetu also explores relationship, but of the digital kind between ritual and technology.

Searle examines her ancestry and displacement in two works about the slippage of time.

Senses of Time runs through March 26, 2017 at the Smithsonian National Museum of African Art in Washington, DC.