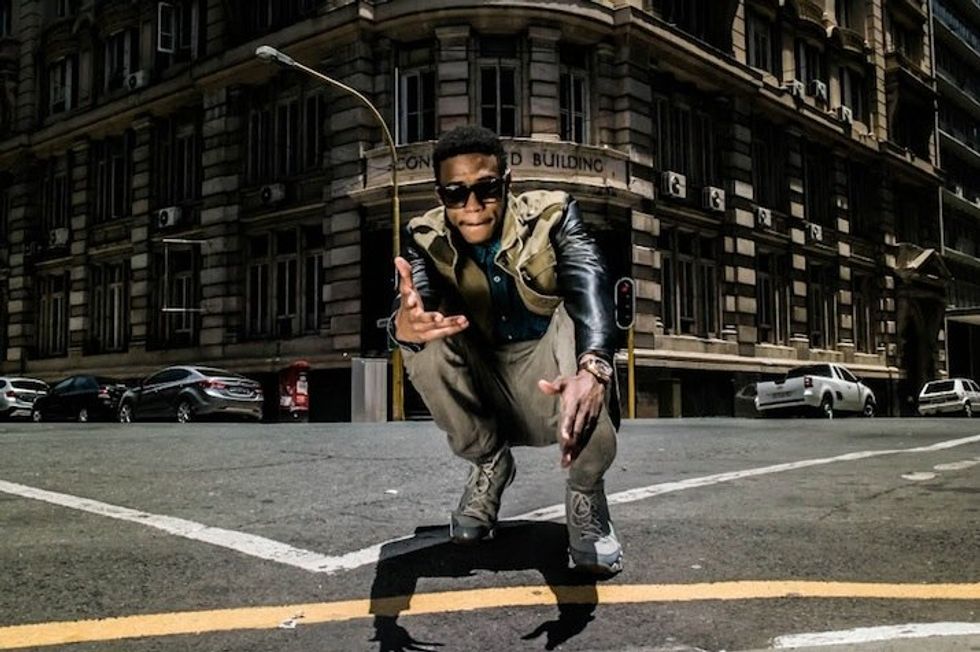 Johannesburg rapper Solo, talks to Okayafrica about his debut album, '.Dreams.A.Plenty,' and the state of South African hip-hop.

Diepkloof, Johannesburg’s Zothile Langa, more commonly known as Solo, is a down-to-earth wordsmith whose music signals a return to hip-hop's storytelling element. With the release of "Bad" (off the No Shades Of Grey EP) in 2011 under soul man Kabomo Vilakazi, SA hip-hop legends ProVerb and Tumi Molekane quickly jumped at the opportunity to remix "Star Dust," a gem off Solo's debut album, .Dreams.A.Plenty. "The Shame 2.0," featuring Buks and Ginger Breadman, is his latest offering, and makes a head-nodder out of a rap reality check. In a quick chat with Solo, we get to know the rising emcee and hear his insight into what's been happening lately in SA hip-hop.

Shiba for Okayafrica: Tell us a bit about your journey toward finally putting together your first album [.Dreams.A.Plenty].

Solo: The journey to putting out my album took a lot of time. I had basically wrapped up my album by February 2013, with the exception of 2 songs. I basically had to wait a whole year before I could put it out publicly. I had only just been formally introduced to the people at Universal, and they still needed to figure things out regarding my release. Looking back now, this allowed us to polish a lot of the music, so I guess everything does in fact happen for a reason.

OKA: Do you feel any extra pressure with so many respectable acts vouching for what you do?

Solo: I do in fact feel some pressure because of all the co-signs I received so early in my career. I do, however, believe that it's the kind of pressure that allows me to channel into my creativity even more. It helped solidify my purpose and objectives in SA hip-hop.

OKA: A lot of performers have gone through quite a bit this year; Riky Rick left Motif, iFani left Sony, Okmalumkoolkat is signed in Vienna and some of the finest acts out there are completely independent. On top of that, there’s been a lot of talk  about race and the issue of cultural re-appropriation in music these days. What’s your take on hip-hop as a culture, as a practice, as a career? Is it a matter of a new wave of independence in the artists or is there something else on the rise?

Solo: Hip-hop as a culture is probably the most revenant and influential art form today. The clothing, the lingo, the sound, etc. are all things that have been injected into branding and marketing of the world's largest and most influential household names. This means that, as a career, there are constant opportunities that are created daily. Opportunities that an artist can even create for themselves. This has made artists turn entrepreneurs. So essentially, the means of obtaining wealth is not conventional, but the opportunities are endless should you work hard enough and smart enough. I still maintain that, regardless of your label situation, it’s very important for all hip-hop artists to work like they're independent. You always need to be at the forefront overlooking your career.

OKA: Do you feel that as a rapper you have a responsibility toward your audience to deliver what they want to hear, or is your choice to make music more about how you would prefer to express yourself and what you want to embrace? Many have met their downfall doing whatever they liked, so how would one reconcile that while trying to make money?

Solo: I do not believe that I have any kind of obligation to anyone regarding what my music sounds like. My music is a true reflection of my thoughts and the period I’m in. As an artist I feel it’s important to direct the public to your vision. The consumer may not understand it, but they have to accept it for the honesty that it is. I stand out from other rappers in the scene right now because of my approach to storytelling. I am making use of my many other talents and vices to define Solo the artist. No one else can do that for you. No one can tell Solo's story better than Solo can.

OKA: What do you feel you have picked up from past greats in local hip-hop that you carry with you today?

Solo: The biggest lesson that I have learned from the greats in SA hip-hop is the art of longevity. That is very important to me. Artists who have been able to stay relevant in their lanes and have made a good living from it... There aren't many examples, but knowing that they exist gives me confidence in its' pursuit….