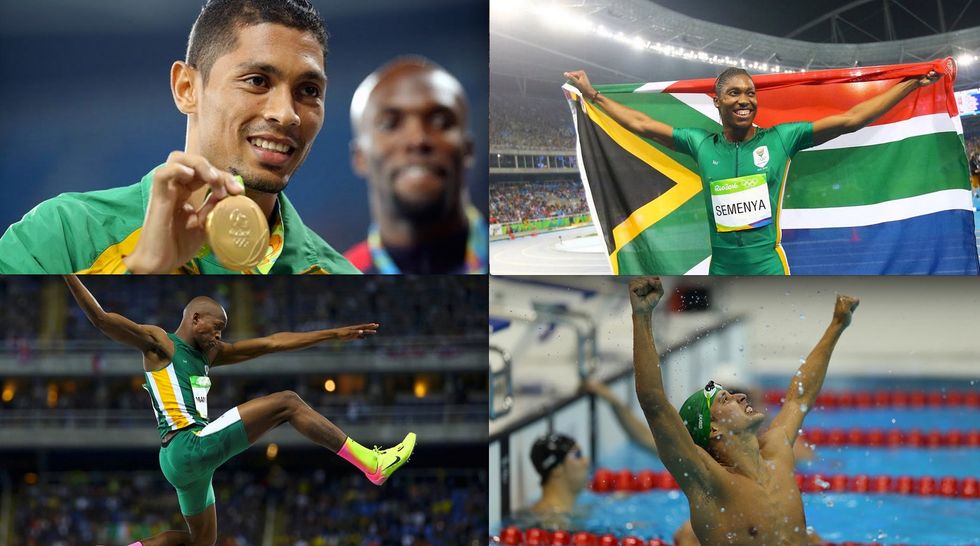 As the Games wrap up, it’s safe to say Team South Africa killed it. We look back at RSA's biggest moments of the 2016 Summer Olympics in Rio.

Heading into Rio, South Africa’s olympic committee wanted double-digits’ worth of medals. They got their ten medals and so much more. With the Games officially wrapped up, it’s safe to say Team SA killed it. Here, we count down South Africa's ten biggest moments of the 2016 Summer Olympics.

Chad le Clos had an eventful week in Rio as the swimmer set out to top his two-medal 2012 Olympics debut. The 24-year-old from Durban began by earning South Africa their second medal of the Games and the third of his career with a silver in the men’s 200m freestyle. He also picked up an African record with a time of 1:45.20. China's first gold medalist swimmer, Sun Yang, came away with the win.

More was still to come from le Clos…

Swimmer Cameron van der Burgh brought home South Africa’s first medal of the Rio Games with a second-place finish in the men’s 100m breaststroke. The event's defending champion was bested by 21-year-old Brit Adam Peaty, who set a world record with a time of 57.13.

And although he came up short of a repeat victory, returning to the medal stand was still a ridiculous feat for the 28-year-old from Pretoria. As Sport24 reports, van der Burgh is just the seventh South African to medal at more than one set of Games, and just the second men’s 100m breaststroke gold medalist to make it back to the podium four years later.

“I’m really happy. It’s a been a tough four years‚ there’s been a lot of ups‚ a lot of downs‚ but winning a medal is something that’s tangible,” van der Burgh, who battled a serious shoulder injury post-London 2012, told reporters after the race.

Competing in her fourth set of Games, veteran javelin thrower and former cricketeer Sunette Viljoen earned her first-career Olympic medal and South Africa's ninth of Rio with a silver in the women's javelin, the same event she placed fourth in four years ago at the London 2012 Games. Viljoen finished second, behind Croatia's Sara Kolak, with a first-attempt throw of 64.92m.

It was her first attempt that earned her the #silver medal.

Heading into Rio, triathlete Henri Schoeman’s chances of medaling seemed slim. Even within Team South Africa, Schoeman’s teammate, Richard Murray, seemed like the safer bet. What’s more, a chest infection a week before the race came dangerously close to crippling his Olympic dreams right then. Schoeman only had medical clearance to compete just a day before the race.

But last Thursday, the 24-year-old South African swam, biked and ran the race of a lifetime. He finished in third, behind British brothers Alistair and Jonny Brownlee, with a time of 1:45:43. His teammate Murray finished in fourth.

"There are no words to describe it,” he said after the race. “You can't beat the feeling of having a medal round your neck. I'm excited and proud, I've made Africa proud.”

Words cannot describe it. Olympic Bronze Medalist! Thank you to everyone supporting and having faith in me back home pic.twitter.com/QdWiUbU9zH

Sprinter Akani Simbine didn’t medal, but his performance in the men’s 100m deserves respect. The 22-year-old from Kempton Park, Johannesburg, ran a phenomenal race and proved he could his own against the world's fastest men, Usain Bolt and Justin Gatlin.

Simbine, who holds South Africa's 100m national record, came in fifth with a time of 9.94 seconds. He was just .01 shy of Jamaica’s Yohan Blake in fourth and .03 off of Canada’s Andre De Grasse in third.

Lining up to the final was a historic feat in itself. In doing so, Simbine became the first South African to qualify for the men’s 100m final since Danie Joubert in 1932. The young runner is definitely one to watch for at the 2017 IAAF World Championships in London.

Many 1sts for me but I'm totally happy with the outcome. God stays showing me that He is who He say He is. pic.twitter.com/m9EnpdcHLr

Rowers Lawrence Brittain and Shaun Keeling picked up South Africa’s third medal of the Games with a bronze in the men’s pair. Clocking in at 7:02.51, they beat the third-place Italians by just over two seconds. New Zealand pulled away in first with a time of 6:59.71.

In October 2014, Brittain, now 25, was diagnosed with Hodgkin’s lymphoma. He’d been living with the condition for two years before undergoing six three-week cycles of chemotherapy. In February 2015, he completed his final chemo session. From then on, his focus was back to rowing. Less than 18 months later, he heads back to South Africa with an Olympic medal.

Thank you all for the support! It has been amazing! Such a journey Big ups and big downs! pic.twitter.com/ynZ2YwZV0R

Luvo Manyonga leapt his way to South Africa’s sixth medal of the Games with a second-place finish in the men’s long jump. He was .01m off from picking up Team SA’s first gold of 2016. American Jeff Henderson eclipsed the South African jumper’s personal best on his sixth and final attempt.

Manyonga’s story is one of the most inspiring to come out of Rio. The South African track-and-field star battled years of drug addiction to place his stake in Olympic history.

“The demons have been trying to pull me down but look at my face … look at me standing here,” Manyonga told SASCOC after the race.

Remember when we said le Clos was only just getting started? After medaling in the men’s 200m freestyle, the Durban swimmer had a bit of a hiccup when it came time for the 200m butterfly, the same event he famously won gold for (and beat his childhood hero, Michael Phelps) at the London 2012 Games. This time, Phelps walked away with gold and le Clos failed to medal.

But the South African swimmer recovered from the loss with a silver in the 100m butterfly. Miraculously, le Clos finished in a three-way tie with Phelps (in the last individual race of his career) and Hungary’s Laslo Sleh. The swimmers clocked in at 51.14 seconds. Singapore’s Joseph Schooling took home the gold with a time of 50.39.

What a night with these 2 rivals & friends @MichaelPhelps@CsL007 Tks for all the ❤ & support everyone #UNBELIEVABLEpic.twitter.com/LSe2kjc61I

Caster Semenya may not have broken a world record as many were hoping, but she came, she ran and she conquered exactly as she set out to do. The 25-year-old middle-distance star from Polokwane brought home South Africa’s second gold of the Games with a first-place finish in the women’s 800m event.

In doing so, she set a new national record with a time of 1:55.28 and made history as the first black South African woman to win gold at the Olympics. Joining her on the medal stand were Burundi's Francine Niyonsaba and Kenya's Margaret Wambui.

In the weeks ahead she'll undoubtedly face haters (it's already started with sixth-place Brit Lynsey Sharp). But one thing is clear: standing by Semenya's side is an entire nation of supporters.

And once again, we present to you, our Queen of 800m & Olympic Gold medalist Caster Semenya, our Golden Girl pic.twitter.com/F6uJvdw7i4

Wayde van Niekerk performance last Sunday will go down as one of the all-time greatest Olympic showings.

Running from the unlikely outside lane of the men’s 400m event, the underdog from Cape Town took home South Africa’s first gold of the Rio Games and picked up a world record in the process. Clocking in at an unimaginable 43.03-seconds, the 8th-ranked South African outran two former Olympians (it wasn’t even close) and smashed American track-and-field great Michael Johnson’s 17-year 400m world record by .15 of a second.

Shortly after his win, NBC ran a segment on van Niekerk’s relationship with Ans Botha, his 74-year-old coach at the University of the Free State, as well as on van Niekerk’s mother, Odessa Swartz, a promising athlete in her own right who was prevented from competing at the international level by the then apartheid regime.

Van Niekerk heads home to South Africa with the world at his fingertips.