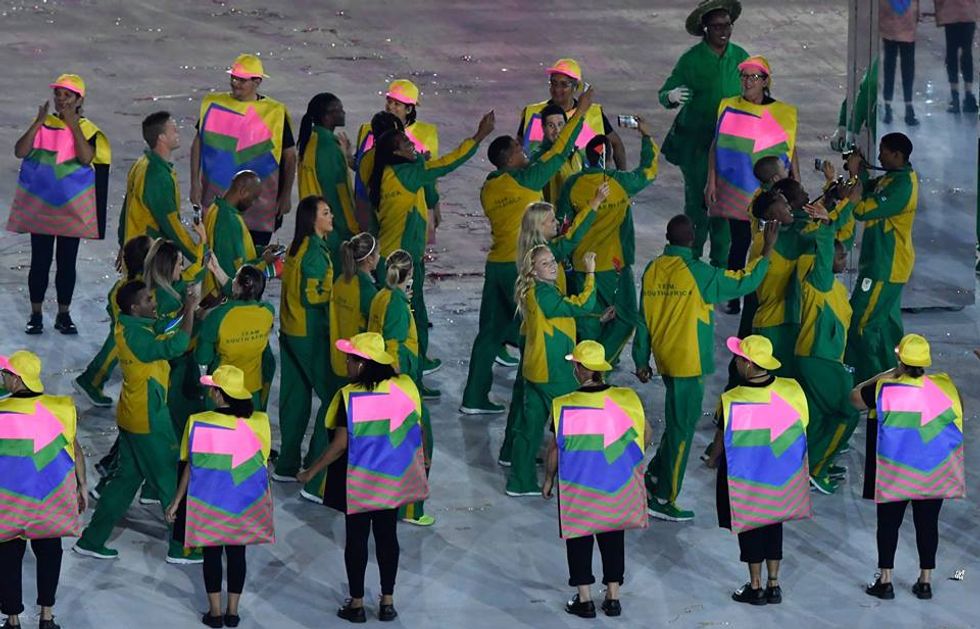 We get to know ten of the women representing Team South Africa in athletics at the Rio 2016 Summer Olympics.

Athletics competition gets underway at the Rio 2016 Summer Olympics today. Spread out over the final ten days of the games, the track and field events will see a total of 33 athletes compete for Team South Africa. 13 of whom are women. Of those 13, just two are black women.

It seems the only sport that has a representation of black people in South Africa is soccer. Issues related to race and sports have been examined by sports analysis over the years, especially about the underrepresentation of black people in rugby. Nonetheless, 22 years into democracy and a “new South Africa,” the SA Olympics team is still very white.

In the spirit of Women’s Month and Olympics fever, we get to know ten of the women representing Team South Africa in athletics below.

Heading into Rio, 800m favourite Mokgadi Caster Semenya was one of the most talked-about athletes in the world. A middle-distance runner from a small village in Limpopo, an 18-year-old Semenya blew everyone away when she won gold in the women’s 800m race at the world championships in Berlin in 2009. Shortly after her win, the International Association of Athletics Federations insisted that she undergo gender verification testing. The IAAF’s decision was met with much backlash. Although the results were never made public, an Australian newspaper claimed they revealed Semenya has both male and female sexual organs. She was forced out of competition for nearly a year before being cleared to compete. Semenya won a silver medal for South Africa in the 800m event at the 2012 Summer Olympics in London. Watch her hunt for gold in Rio begin on Wednesday, 17 August.

The South African sprinter has a number of titles under her belt. She also holds a degree in sports psychology and an honours degree in sports management from the University of Johannesburg. Whilst a student at UJ, Conley competed at the World Youth Championship in 2007 and 2008, the African Junior Championships in 2009 (where she came in second for the 100m and 200m race) and at the African Championships in Durban this year (where she placed second for the 200m race and first for the 4x100m relay). But Conley's greatest achievement thus far has been winning silver in the 200m at the 2016 African Championships. Watch Conley in the 100m preliminary on Friday, 12 August, and round one of the 200m on Monday, 15 August.

With one eye fixed on the destination, there is only one left to guide you along the journey. Be patient and live with the knowledge that all you are searching for is certain to come if you prepare for it and expect it.

Horn’s career hasn’t always been smooth sailing. Speaking with East Coast Radio, the sprinter explains her career was stagnating just five years ago. She made a heroic comeback after she started working with a specialist sprint trainer, Rainer Schopf. In 2015, Horn sprinted to a time of 11.06 seconds at the World Challenge meeting, tying her with a 25-year-old national record for South Africa's fastest 100m. All eyes are on Horn this Friday as she sets out to become one of the few women in history to break 11 seconds in the 100m event.

Whatever the mind can concieve and believe, you can achieve. #faith #believe #ready #fast #teamSArise #Olympics #Rio2016

A sprinter from Rustenburg specialising in the 400m event, Thipe became the first black woman to represent South Africa on an Olympic track when she competed at the 2008 Beijing Summer Olympics. In 2012, her career took a hit when she tested positive for a banned substance called norandrosterone. But she quickly bounced back to the top, and she’ll continue to make us proud at this year’s Olympics. Watch Thipe in round one of the 400m event on Saturday, 13 August.

Cape Town’s Dominique Scott is a long-distance runner with a marketing degree from the University of Arkansas, where she was, rather remarkably, a three-time SEC cross country champion. We’re expecting her to run even faster in Rio and come home with more wins. Watch Scott compete in the 10, 000m event on Friday, 12 August.

Palframan, who hails from Eshowe in KZN, showed great interest in swimming and athletics from an early age. At 14, she won silver medal at the SA Youth and Junior Championship. Since then, she’s won just under ten gold medals at the Senior South African Athletic Championships. Will she acquire more medals in Rio? We sure hope so. Watch Palframan compete in round one of the 400m event on Saturday, 13 August, and the 200m event on Monday, 15 August.

South Africa’s 400m hurdle specialist, Nel has a personal best of 54.37. She’s competed all over the world. From Shenzen, Marrakech, Daegu to Porto Novo, Nel keeps flying the South African flag high wherever she goes. Round one of the 400m hurdles goes down on Tuesday, 16 August.

Prinsloo divides her time between being a student at the University of Johannesburg and an accomplished athlete. Her personal best in the long jump event is 6.81 metres (-1.2 m/s), which she set in Stellenbosch in 2013. For this long jumper, making it to the Olympics was a dream come true. But the road to Rio wasn’t the easiest. She battled with chronic back problems for three years. Watch her in round one of the long jump on Wednesday, 17 August.

Enjoyed my Womans Health shoot Yesterday. Soooo much fun could do it all day. Behind the scenes. #durbanbeach #greatopportunity

Viljoen has had a successful and wondrous career as a javelin thrower. In 2012, she set an African record with a throw of 69.35m at the Adidas Grand Pix in New York City. She heads to Rio with a recent gold medal under her belt from the 2016 African Championships in Athletics in Durban. Watch Viljoen compete in round one of the javelin throw on Wednesday, 17 August.

Oosthuizen started race walking when she was 11. A decade later she’s still race walking and breaking records as South Africa’s top race walker. Watch her compete in the 20km walk on Friday, 20 August.