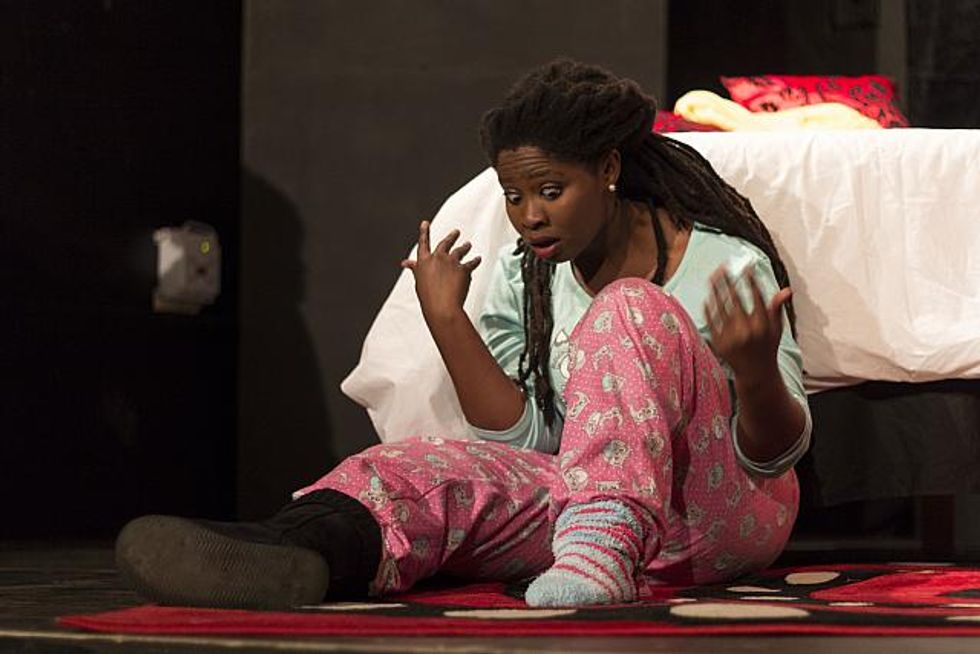 “He loves Taekwando, reading, long walks in the rain... and yes, madam, he's hung like a donkey!” - Didi

After playing in front of sold-out audiences at this year's National Arts Festival in Grahamstown, South Africa, Kristy Suttner's hilarious theatre comedy piece, Six Inches, returns to the stage – this time, to tickle and shock the demure consumers of Johannesburg's theatre scene.

Between bursts of dance, monologues and song, the effervescent and somewhat motley trio boldly take on the topic of their sexual encounters with partners of differing shapes and colours and, of course, sizes. Well-heeled, regal Tshepo, clad in red silk, has never had an orgasm – no thanks to her ex-husband; 28 year-old pyjama-donning and doe-eyed Didi is still reeling from her recent first sexual experience; foxy Anel strikes a sultry, feline pose in hot pants, disregarding the Afrikaner conservatism with which she was brought up but being surprisingly sensitive beneath her wild, adventurous facade.

The story is this. The friends have a tequila-fuelled pyjama party to discuss the scandal of Mandisa, a mutual friend, leaving Greg, her groom-to-be, at the altar. During this dissection, more scandalous truths emerge, stories involving the three ladies themselves.

"And four is pathetic!” – Tshepo

Their stories of fear, yearning and sexual oddities bring hilarity with edgy, relevant dialogue, courtesy of the comedic genius of Kristy Suttner-Stride and Diaan Lawrenson, who adapted the theatre piece from what was originally a one-woman show called Dicktalk. But even with the current format, Suttner-Stride, the show's director and the actresses' mentor tells me, the response to the show has been consistent because of the subject matter.

“It’s a universal subject which people have always and remain fascinated with… recipe for success!” she said in an email chat.

Since it premiered at South Africa's National Arts Festival over 13 year ago, the item has captured audiences in hysterics from the KKNK to the Market Theatre, and Guild Theatre. Suttner-Stride sees it going further to more audiences around the country.

“I would like to see this young, new, edgy cast back at NAF next year for sure, and potentially tour to smaller cities. Then we need a Jozi premiere, perhaps in Sandton Theatre or similar,” she said.

Dikelo Mamiala, who plays Didi and also serves as co-producer, says the show owes much of its successes to the quality casting by the director.

“Kristy did very well with the casting. I definitely have a lot of Didi's prudish ways, Jess has a bit of Anel's wild side, and Bongi, like Tshepo, is a nurturer, and cares a lot for those she loves,” says Mamiala. She also acknowledged the show's accessibilty, despite its subject matter, as a defining characteristic of the play.

“Every woman, from all walks of like, can find a character they can relate to. The fact that this show was actually written a decade ago, but still resonates with women today is what makes it a winner,” she said.

As the title suggests, this wouldn't be a comfortable outing for the whole family, so if you plan on heading out to see it, find something else for the little ones to do...unless they're over 16, of course.

Six Inches begins its Johannesburg run on Thursday September 3 at POPArt Theatre in the Maboneng Precinct. The show will run until September 6. Tickets are available on the POPArt website.

Olwethu is a writer/scholar/wannabe pugilist. He loves beer, film, literary fiction, Queen and art. He lives in Cape Town.