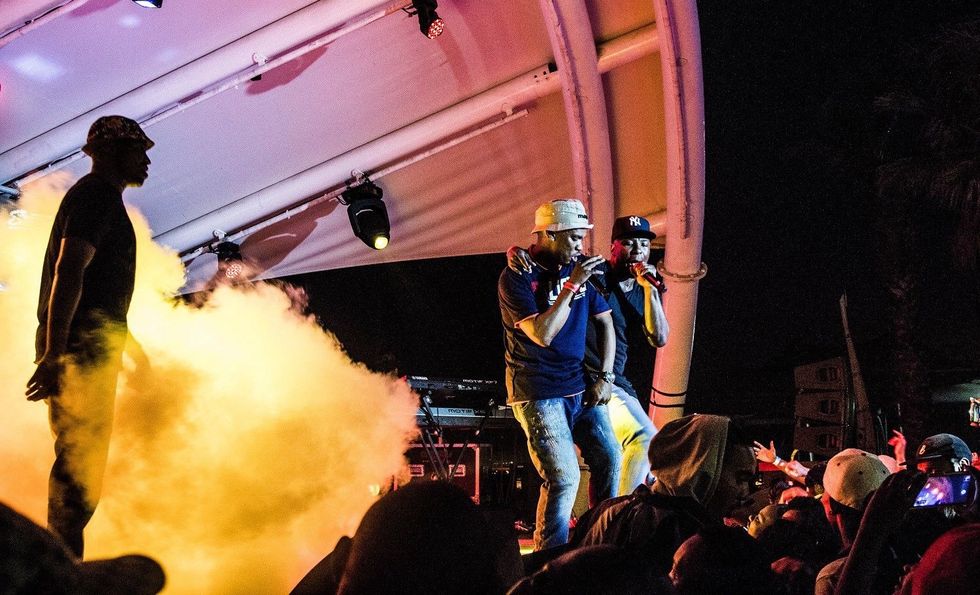 The complex relationship between kwaito and SA hip-hop: collaborations, shots, cross-influences and an undeniable symbiotic relationship.

Back To The City, South Africa’s biggest hip-hop festival, returns to Johannesburg this year. The line-up was released last week and, as usual, it’s stellar. The inclusion of kwaito star Zola was a surprise to many; a pleasant one for me.

In this piece, I explore the love-hate relationship between kwaito and hip-hop. This has played out in collaborations, shots, cross- influences and an undeniable symbiotic relationship.

Twelve years ago, Skwatta Kamp released the single “Umoya,” ushering hip-hop into the mainstream in the South African music scene. “Umoya” was a smash hit. The crew won their second Best Rap Album at the 2004 South African Music Awards for the album Mkhukhu Funkshen, off which the song was a single of.

At the time, kwaito, house and afro-pop were still running the airwaves. “Umoya” was considered “originally South African.” Most of the lyrics were in indigenous languages—mostly IsiZulu, SeSotho and Tsotsi Taal. Rappers at the time were getting flack for rapping in English, and getting accused of imitating their American counterparts. I remember reading a review of a Cashless Society album on the then-popular youth culture magazine, Y Mag. The reviewer expressed their disappointment on the lack of originality on the album: It sounded too American, they wrote.

Kwaito has always flirted with hip-hop. Kwaito legends like Senyaka (R.I.P) and Oskido made some rap songs in the '80s and early '90s. In the late 90s, the group TKZee brought lyricism to kwaito—they had the catchy hooks and repetitive lyrics as per kwaito fashion, but on some songs (“Shibobo” comes to mind), they had structured sixteen-bar verses that had an undeniable hip-hop influence. From some of the lines they (especially member Kabelo) repurposed from American rap songs, hip-hop’s influence was evident.

Kwaito hasn’t always been sure of its stance on hip-hop. Stylistically, kwaito had some hip-hop elements; kwaito lyrics weren’t usually sung (even though there are a few exceptions), but delivered in chants that lean more towards rapping than any other style. Just like hip-hop, kwaito was the voice of young black people from the ghetto venting about their struggles while having a great time.

Yet a lot of kwaito artists used to diss South African hip-hop.

A War of Words

Brothers of Peace released a song called “Ase Mo States” (this is not the States) in the '90s, while one of its members Oskido would go to present the popular hip-hop show, Rap Activity Jam on YFM a few years later. Oskido had a rap song called “Mama Wami,” which featured the rap group Baphixile. (Kalawa Jazmee, a label co-owned by Oskido, would go on to sign their first hip-hop artist Ab Crazy around 2014.)

In the early 2000s, there was kwaito star Zola whose debut album Mdlwembe (2001) had songs like “Ghetto Scandalous” and “Woof Woof,” which were overtly hip-hop. A reasonable number of songs on the album also featured rapped verses.

On “Ghetto Scandalous,” Zola expressed his disgust of cats who used foreign hip-hop-centric words like “bitch, hoe and motherfucker” in the township. Which was hypocritical, given the song’s hook used the phrase “don’t fuck with us.”

Rappers were being told to switch to kwaito as it was more South African, and was the popular genre. Mr Selwyn on Amu’s 2003 single “Attention” was evidently pissed off at being dictated to.

He rapped, “What about ikwaito? Wanna try it?/ Yeah… but fuck it, I don’t like it/ Noma i-hip-hop inama flops I will stick to it.” He continued on the same verse: “I can’t help it, but sound ghetto on this shit/ ‘Cause I know I got talent/ You want me to sound like a broken album I can’t/ keep on saying the same shit, again and again/ And again and again, like a scratched up CD or something.”

Skwatta Kamp had disappointed their day one fans with their new, accessible sound. Though more more accessible (peep Skwatta Kampaign) than what Cashless Society, Hymphatic Thabs, Spex and other artists of that era were doing, Skwatta’s work had been uncompromisingly hip-hop.

Mkhukhu Funkshen, though a hip-hop classic, was a tad watered down, with radio-friendly songs like “Umoya,” “Kings” and “Eskhaleni.” The vocalist Relo was also featured on a reasonable number of songs.

The rapper Wikid, who was part of the quartet Township Frekwensi, alongside the singer Nothende, Amu and Mr Selwyn, took shots at Skwatta Kamp on “The Man,” a 2005 song on which he was dissing everyone from Mandoza to Loyiso, Magesh, Doc Shebeleza, among others. “Why don’t these Skwatta cats stick to their style?/ ‘cause I haven’t heard that one line shit in a while/ Nale kwaito incedwe yithi, shit, did I lie?” he rapped.

Rappers Had No Choice But To Do Kwaito

Rapping in vernacular and adulterating your hip-hop with kwaito seemed to be the working formula for South African hip-hop artists to flourish. The motive was simple: kwaito was selling, and hip-hop was struggling.

A good example is Pitch Black Afro, whose brand of hip-hop had a huge kwaito influence. He rapped in IsiZulu, made kwaito-esque catchy hooks (e.g. “Matofotofo” which, by the way, uses the same sample as Biggie’s “Kick in the Door”) and his beats, which were made by kwaito and house producer DJ Cleo, were jiggy and had kwaito written all over them. Pitch Black Afro’s debut album Styling Gel (2004) went double platinum, which was a huge achievement for a hip-hop album.

Hip Hop Pantsula, who released his first album in the early 2000s, was as much kwaito as he was hip-hop, hence his name. Since his first hit single “Mafikeng,” the rapper was rapping over beats that had kwaito sensibilities. Just as on his subsequent singles “Jabba,”“Tswaka,”“Music and Lights,”“Wa Mo Tseba Mtho” and “Bosso Ke Mang.” HHP went on to be one of the biggest hip-hop artists in South Africa with two gold albums, YBA2NW (2005) and Acceptance Speech (2007), under his belt. That was unheard of at the time.

In 2003, DJ Sbu masquerading as the asinine kwaito star Mzekezeke, released his first album Guqa Ngamadolo. The album featured the single “Amakoporosh,” on which he openly dissed hip-hop. The narrative was still the same; hip-hop was un-South African. TS Records, a label DJ Sbu co-owns, would later sign its first hip-hop act, Pro, circa 2007.

How Hip-Hop and Kwaito Fell In Love

Hip-hop’s attitude towards kwaito has changed substantially in recent years. Tumi Molekane (now Stogie T) worked with the kwaito star Brickz on “Bambezela,” the first single off his second solo album Whole Worlds (2010). No one saw it coming. Tumi was a hip-hop purist.

In 2012, Tumi and Zubz teamed up for Where Were You?, a collaborative mixtape as the duo TZ Deluxe (a play on words for the pioneering kwaito duo MM Deluxe, which consisted of Mdu and Spikiri). The mixtape saw Tumi and Zubz rap over monumental kwaito instrumentals such as Mshoza’s “Kortes,” TKZee’s “Mambotjie,” Mdu’s “Chepad”, among others. Great project by the way.

Spoek Mathambo and OkMalumKoolKat were some of the first artists to successfully fuse kwaito and hip-hop, creating a subgenre, which would culminate in 2014 and be known as new age kwaito. That was when K.O released the hit single “CaraCara,” which appropriates lines from the Trompies song “Bengim’ngaka.” The song went on to win him a Record of the Year award at the 2015 South African Music Awards.

The infusion of kwaito into hip-hop played a huge role in the popularisation of hip-hop in South Africa.

K.O told Red Bull Music Academy in 2015, “When we finally made the decision to use our own cultural influences to create what is now South African hip-hop identity, we found that was more appealing, not only to fellow South Africans but also beyond our own borders.”

Not Everyone Was Pleased

While most music fans were in love with this new relationship between the two genres, purists weren’t as pleased. The notion was that songs like “CaraCara” and Cassper Nyovest’s “Doc Shebeleza” weren’t hip-hop. K.O and Nyovest were repeating lines on the songs’ verses, as per kwaito fashion. They were rapping about subject matter—like the gusheshe and the CaraCara—that’s kwaito-influenced. They even shot their videos in the hood—the way kwaito videos were.

The rapper Reason, when he didn’t top the 2015 MTV Base Hottest MCs list (K.O. took the number 1 spot), released a song called “F.W.S,” in which he took shots at new age kwaito. “Guess I need to start making all of that ignant shit/ Empty words that can fill up a club and make sisters dip/ Remix some kwaito shit and make a dance,” he rapped. He clearly had his eyes on K.O. and Cassper Nyovest whose songs “CaraCara” and “Gusheshe” both had elements of kwaito and came with dances.

In the 21st century, lines between genres are blurred. It’s a tough time to be a purist. So, even though Back To The City, which is a 100% hip-hop festival, hosting a kwaito artist may look like progress to some, it’s a huge confusion to others, because the two genres have always had an equally confusing relationship.

Back To The City takes place on the 27th of April at Mary Fitzgerald Square in Newtown in Johannesburg. Tickets available here.