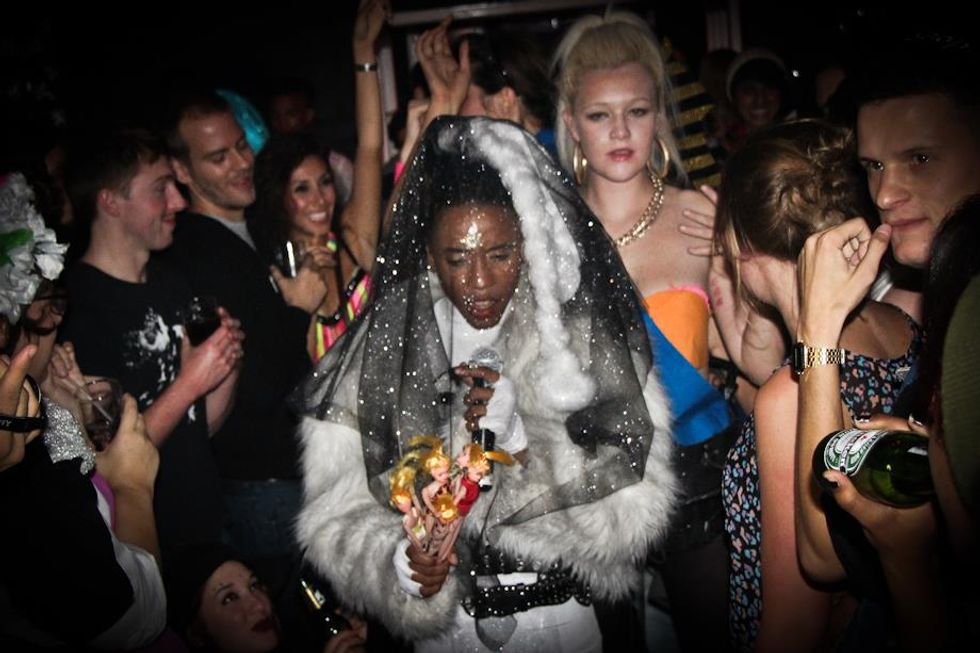 “One thing that does propel me constantly is this incessant, burning desire to make art, to express myself and tell my story because I feel it deserves equal attention as anybody else's... I'm sick of seeing the same old clock turning. The world needs fresh stories, fresh ideas, new ideas and people who embrace that. It's also frustrating to look at pop culture and feel like no one represents you or the kind of person you are-- so the best is to become the person you want to represent you.” - Siya Ngcobo

In a wonderful convergence of dark and light, Cape Town creative Siya Ngcobo seems to possess as much of the passion and determination to deliver his art as his stage name-- Umlilo, meaning flames -- suggests. His brand new video premiering on Okayafrica, features Kyla Phil of The Exorsistahs on a track called "Living Dangerously", the first single off his latest EP, Shade of Kwaai. During our interview with Siya, we spoke about South African music what a difference being different can make.

Okayafrica: You have a wonderfully rich voice, when did you know that you wanted to perform?

Siya Ngcobo: Thank you! I've never heard anybody describe my voice like that. It's flattering. I guess when I knew I was a performer I would have to give into the cliché of what most performers say, it's something I carried from a young age. I used to be able to walk, talk, act and dance like anyone on TV so my family found this amusing... I even landed a role on the film Sarafina by mistake because my mom was working on set and I got to play Sarafina's little brother Jabu. I was only four years old at that time. The older I got, I just became more fascinated with the world of performance, music, film and theatre so I honed all those skills.

OKA: Where did the inspiration for the name Umlilo come from?

SN: Umlilo is sort of the delinquent love child of Siya Is Your Anarchist. I made music and performed for two years as Siya Is Your Anarchist, a kind of “shit-stirrer, fist-in-the-air” type persona in which I channelled all my music. As the years went by and my music began to evolve and I thought a new name in which to express myself would be great. Umlilo was perfect for where I'm at right now artistically because it means fire or flames in Zulu and that's exactly how I felt about my music and the kind of artist I want to be. I didn't know any other artist with that name so it felt like the universe approved of this decision.

OKA: It seems the universe graced you with some fine co-conspirators on the new EP! Who worked on the tracks with you and what was the process like?

SN: I initially approached producer/DJ Stefan Wyeth, who produces for Exorsistas, to master my tracks, and he loved my sound and went on to co-produce "Living Dangerously". Kyla Phil, who directed the video for "Living dangerously" also connected with the song and we decided to collaborate. Producer and guitarist for Beatenberg, Ross Dorkin, came on board mid way through the process and mastered all the other tracks in the EP and did a great job. The process was interesting, exciting and frustrating at times. In our case, it worked out pretty well and probably because everyone involved believed in the songs so much. As artists, I respect them so much and that's why it wasn't as hard as it could've been for me to hand over my work and entrust them with it.

*Photo taken from Skattie, what are you wearing?

OKA: How much does your gender-neutral, if not, androgynous lifestyle come into your music?

SN: Well I wouldn't call my "lifestyle" gender-neutral at all because I live in a society where there is no gender neutrality-- from clothes, bathrooms, filling forms, dating, everything has signs and symbols and people feel very uncomfortable without these boxes. I still get treated a certain way because of the colour of my skin, hair, how I look, speak, dress and act so the gender neutral lifestyle is non-existent. I think it comes into my music as naturally as it happens in my life. I think whether artists like it or not, your beliefs, thoughts, sexuality and point of view will always come across in your art.

OKA: So is that what the creative scene in Cape Town is missing, if anything? Embracing those things that make us unique?

SN: I think in every creative cycle there comes a time when everything stagnates and people run out of ideas (usually due to ignorance because Cape Town has so much rich culture and inspiration). What Cape Town is missing is an introspective look at its rich heritage, amazing gay culture, middle class tendencies and apparent social and racial divide, and turn it on its head and interrogate it. Also, a psychological shift that artists need to be poor in order to make credible art, that's bullshit. The creative scene in Cape Town needs unlikely characters and proper pioneers. We need art to challenge us constantly and reflect our society.

*Photo taken from Skattie, what are you wearing?

OKA: What was the inspiration for the video? Tell us a bit about the ins and outs of its makings.

SN: The song is about what happened to my family and about the kind of isolation/solitude we have to live with in South Africa. Stefan Wyeth added a sort of cool urban sound to the production of the song so Kyla Phil and I wanted to do something simple and subtle seeing as its the introduction video to Umlilo so we went with the idea of contrasting darkness and light, nature and an indoor space, and in a very subtle way contrast the idea of being

confined in an enclosed space and also being free in nature.