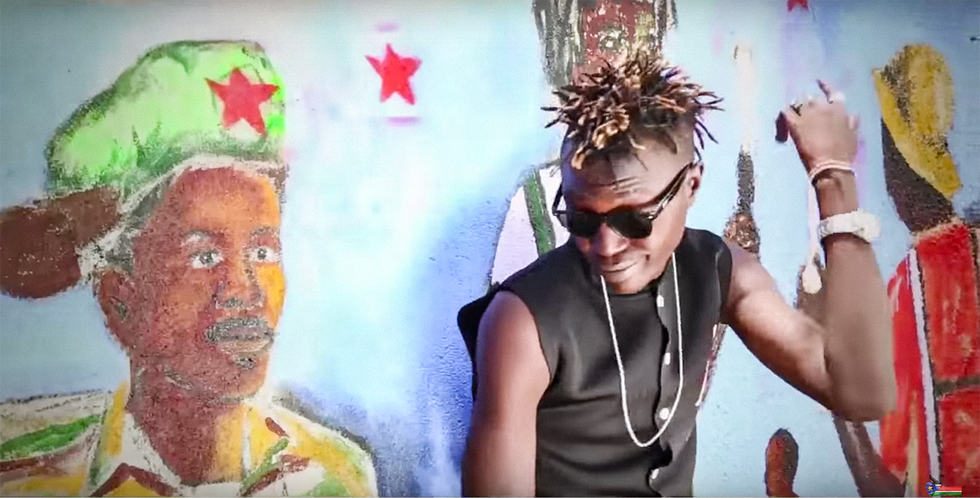 Many of the biggest musicians in South Sudan have joined together to promote peaceful dialogue through their art.

Few South Sudanese celebrated their country’s fifth independence anniversary this July. Instead of hosting celebrations on independence weekend, Juba, South Sudan’s capital, turned into a war zone for the second time since civil war broke out in 2013. The shaky peace deal between the government and the opposition was effectively falling apart, as fighting raged throughout the city, killing hundreds.

Crazy Fox, aka “The Dancehall Monster,” was in his studio in Juba that weekend and on independence day, just before the fighting spread, he recorded a song that was to become a major hit in Juba during the coming months. Its title is “Ana Gaid,” which means “I am staying” in Arabic.

“I was like, you know, I am tired,” Crazy Fox says. “I am tired of running out of my country every single time and then coming back when the peace is back. So I just told these guys: ‘ana gaid, ana ma mashi’ [I am staying, I am not leaving]. I don’t care, if I am to die here at home, let me just die at home.”

“Ana Gaid” describes the deteriorating security and economic situation in South Sudan, expressing the hardships of the South Sudanese who struggle as the crisis goes on. The music video features Crazy Fox sitting in a typical lower class residential compound in Juba as its residents intend to leave the country. Unlike most South Sudanese music videos, it was not shot in a fancy club or a hotel with a swimming pool, and it does not feature expensive cars or clothes.

“I had to be in that community, poor community. I had to go into a ghetto…to show what is happening down there,” Fox says. “I had to make these things look real. Because the song itself is not an imagination, the song is based on a true story.”

The world is spoiled

The frustration expressed by Crazy Fox in “Ana Gaid” is part of a wider trend in South Sudanese popular music. In the last two years, some of South Sudan’s most celebrated musicians have increasingly been using their art to discuss the ongoing war and some of the ways in which it impacts the lives of ordinary citizens.

Within this trend, the economic crisis and the escalating rates of urban crime are re-occurring themes. As most of the fighting since the beginning of the war took place outside the capital, these are also some of the main issues that have been impacting Juba’s urban population as a consequence of the conflict.

In early 2015, Mr. Lengs released the song “Kalam Dollar” (which roughly translates to “the issue of the dollar” in Juba Arabic), discussing the worsening economic situation in South Sudan. Slightly later, Silver X, one of South Sudan’s most popular musicians, released “Dunia Karabu,” which in Juba Arabic means “the world is spoiled.” The song similarly deals with the rising costs of living and inflation.

Silver X and Mr Lengs have reportedly exchanged some accusations of plagiarism over the two songs, but both songs were eventually very popular.

Inflation has been rising in South Sudan since the beginning of the war, and prices continue to soar. Over the last year only, prices of food increased by more than 1000 percent.

In another song called “Tebiu Chapati” (“Selling Chapatti”), Crazy Fox calls on South Sudanese who complain about the rising costs of living and inflation to go out and work.

“South Sudanese go, sit under the tree, get a newspaper, taking tea…So I as an artist decided to compare Ugandans to our own South Sudanese economically,” Fox explains. “I’m like, you South Sudanese, if Ugandans are able to sell chapatti, and they are able to make a living, you go on the streets too and start small shops…The message was hard but it went down to some of the ghettos.”

Active fighting was not taking place in Juba throughout most of the civil war, but insecurity in the capital worsened with time—a constant remainder of the turmoil and bloodshed ongoing in other parts of the country. Killings by “unknown gunmen” became widespread, as well as criminal attacks, rapes and thefts. Soon, these daily incidents found their way into popular music as well.

Mr. Lengs’s song “Juba Karabu” (“Juba is spoiled”) compares today’s Juba with that of 2006, which was peaceful and safe. The song’s music video follows men who steal a motorcycle and attack its owner, and then go on to break into a house and rape a woman.

Silver X’s “Times 10” similarly addresses the urban crime in Juba. Describing thefts, attacks and killings, Silver X argues Juba is “10 times more spoiled” than it previously was. Writing from Kampala, where he is currently recording a new album, Silver X explains that he wrote the songs because at the time “everything doubled by 10 times from the normal: too much killing on the roads…robbery at night or even daytime. 10ssp [South Sudanese Pounds] became like 1ssp. So everything went up by ten and even worse.”

People like songs dealing with these issues, Silver X notes, because they “hold a lot of reality. The truth.”

Frustration may have replaced the celebrations and hope that characterized South Sudanese popular music at the time of independence, but L.U.A.L argues that despite these new voices, there is no fundamental change in the music industry. Most songs still deal with clubbing and romance, he says. “Things that are not really relevant,” in a country ravaged by civil war.

Raised in the U.S., L.U.A.L came to South Sudan in 2009, two years before the country’s independence. He has long been dealing with political subjects in his songs, and is known for his sharp and often highly critical lyrics in Juba Arabic. His stage name stands for “Lyrically Untouchable African Legend.”

L.U.A.L’s music is driven by a strong commitment to a peaceful and prosperous society society in South Sudan, but he also knows that in the current atmosphere, criticism can be risky. Earlier this year, he was harassed after releasing his song “Dowla Jadit” (“New Country”). The song, banned from being played on the radio, criticizes the chronic lack of public services and corruption in South Sudan, and the regular official excuse for these problems: “it’s a new country.”

L.U.A.L says that the main reason the song attracted significant attention was that it is in Juba Arabic, and not in English. “I said, this time, let me do something they will understand. So I did it in Arabic and it was too much…it was very very direct.”

“In hip hop you have to be straight forward and speak the reality,” he explains.

While the costs of living and urban crime are popular everyday issues that are easy to relate to, they hardly represent the worst of what many South Sudanese have been experiencing over the last three years.

As the war in South Sudan enters its fourth year, observers warn that the country may be on the verge of a “catastrophic collapse,” and possibly genocide. A UN commission recently said that “there is already a steady process of ethnic cleansing underway in several areas of South Sudan using starvation, gang rape and the burning of villages.”

More than 1.3 million refugees have already left the country since the war started, a greater number is displaced within its borders, and no one was able to count how many people have lost their lives. The persistency of the violence has frustrated even the most hopeful of the optimists who witnessed the country gaining independence in 2011.

It is in this context that a group of young South Sudanese artists and activists, including Mr. Lengs, L.U.A.L, and Crazy Fox, recently launched a campaign titled “Ana Taban,” meaning “I am tired,” in Arabic. The group initially met in Kenya in July for a workshop, and in early August released a song, dedicated to “all those we have lost in this senseless war and to all those who are still here and are tired enough to make the changes we need.”

“South Sudanese, every day—death, death. Until when, brothers?” they ask in the song. “We are born in war, we grow up in war, and we will die in war as well?”

Nairobi-based South Sudanese singer Tutu Baibe is a member of Ana Taban, and was part of the initial group that met in Kenya. She explains that the idea was to form a group that will “fight for the peace in a peaceful way.”

By now, the group consists of more than 50 musicians, painters, poets and actors, who come from different backgrounds and ethnic communities. They are not affiliated with any political party or movement in South Sudan.

“I felt that it was an opportunity given to me to speak my heart out to my people to stop fighting and reconcile,” Baibe says. “We are all tired. Everyone, in every tribe, is really looking forward to a change in our country.”

Since launching the campaign, Ana Taban members have held several public performances in different neighborhoods in Juba, and collaborated to create street art. Taking their art to the people, they aim to promote peaceful dialogue, and combat the “tribalism” and ethnic hatred that is fueling the violence in South Sudan.

Crazy Fox joined the group after they came back from the initial workshop in Kenya. “I saw this as a good idea,” he explains. “I am not doing music for myself, I am doing the music for the people.”

Yotam Gidron is a master's student in African Studies, University of Oxford.
From Your Site Articles
Popular
News Brief
afrima