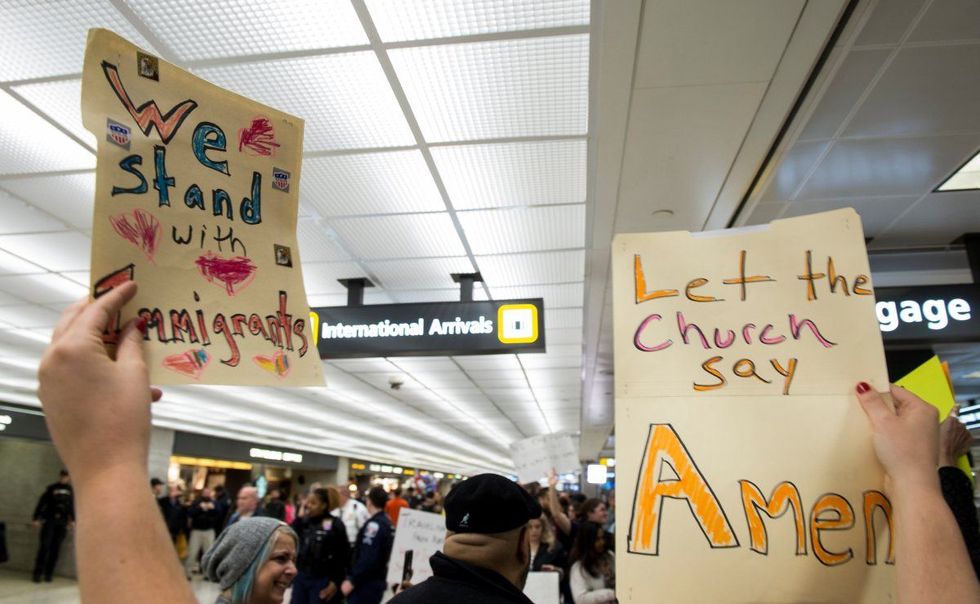 Demonstrators have gathered at a major London airport to prevent a flight, carrying asylum-seekers from Nigeria and Ghana, from taking off.

Eight campaigners gathered at 10:00 pm and formed a physical blockade to prevent the flight from taking off, refusing to leave until the flight is canceled.

Many of the deportees onboard the flight fear that their lives will be in danger if they are sent back to their respective countries. Some have been in the country for extended periods of time and are being separated from their families.

“Both of my parents are in the UK, they are British,” says one 21-year-old being sent back to Nigeria. "I have been here, with them, for over 5 years. But the Home Office wants to send me back to Nigeria. The Home Office say I cannot stay here with my parents anymore. My brothers are here. I am in fear to go back to Nigeria, there is fighting over land. They killed my brother. They killed my grandfather,” they wrote anonymously on Detainedvoices.com— a blog dedicated to sharing the stories of those held in immigration detention in the UK. There are several accounts on the site that detail the dangerous circumstances that some face if deported.

"I claimed asylum which was refused because of my sexuality. I am a lesbian which is not ok in Nigeria," read another post.

The demonstration was planned by a band of activist groups including End Deportations, Lesbians and Gays Support the Migrants and Plane Stupid, reports Huck.

“We’ve taken this action because many people on this flight are being placed in serious danger by being callously deported back to Nigeria and Ghana, there’s been a lot of attention recently on Trump’s racist Muslim ban, but what’s happening in the UK is equally repellant,” says Emma Hughes, a member of End Deportations, who's taking part in the airport protest.

“People are being rounded up in the middle of the night based on their perceived nationality, forced on to planes in undisclosed locations and strapped down in their seats with no one witnessing the violence they’re facing. Do we really want to live in the sort of society where these violent and secretive mass deportations are being normalised?”

While eyes are on America following Trump's discriminatory Muslim travel restrictions and his proposal to establish a wall on the US-Mexico border. According to Susan James of Plane Stupid, mass deportation has been taking place in the UK since 2002. The act is a symptom of the UK's hostile immigration polices. Huck reports that the UK is currently the only European nation where migrants can be detained indefinitely.