In Photos: Stogie T & We Got The Jazz Band Live In Johannesburg 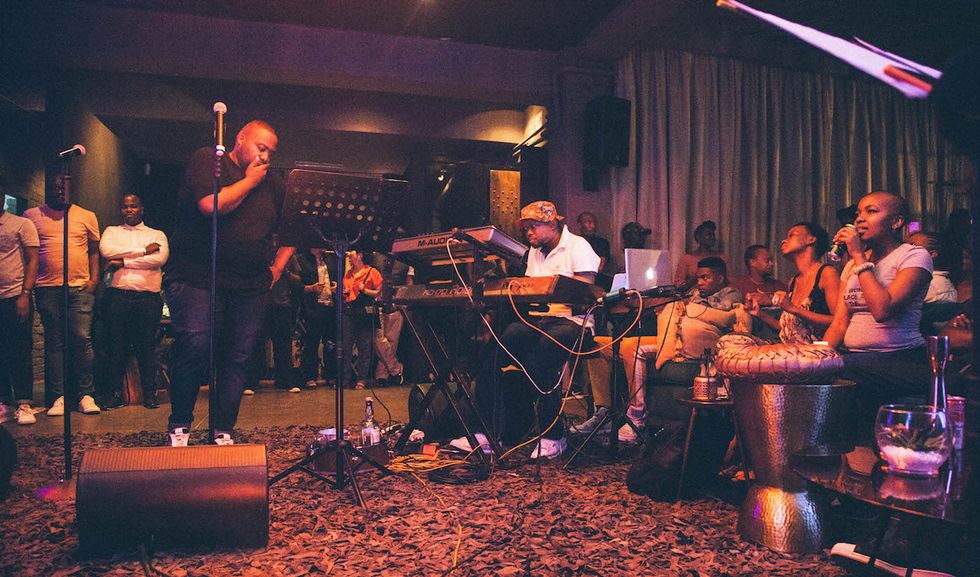 Stogie T and We Got The Jazz band. Photo by Sabelo Mkhabela.

The South African rapper performed songs from Honey ad Pain and his self-titled album at the Artivist.

On Friday of last week, veteran South African rapper Stogie T performed songs from his latest mixtape Honey and Pain and his 2016 self-titled album at the Artivist in Braamfontein, Joburg. He was accompanied by a 4-piece band (Sthe Bhengu on trumpet, Wandile Molefe on piano Thembinkosi Mavimbela on bass and Sam Ibeh drums) to reinterpret the, songs, which were mostly produced electronically.

Guest artists who appear on Honey and Pain such as Kwesta, J Molley, Lucille Slade, Jay Claude and Ayanda Jiya also made appearances during the show.

This was my first time seeing the artist performing with a band. The closest I've gotten was through YouTube clips and listening to his seminal Live at the Bassline album when he was still part of the band Tumi and The Volume.

Things were different this time around, however. Not everyone seemed to agree with the artist's sentiments. Songs like "We Own This Bitch" and "Side Chick" flew above many of the audience's heads (the eyes never lie, you see, especially those who took them at face value). Most of the audience weren't necessarily rap fans, not even sure if they were Stogie T fans, as a few were asking that he performs "Yvonne," a song from his 2002 EP A Dream Led To Thiswhen he still rapped under his real name Tumi.

That's the thing about reinvention; it's near impossible for an artist to take their fans with as they evolve. During the show, the MC explained himself after performing the song "Honey and Pain," which his latest mixtape was built around:

"I will never ever scoff or look back at my previous work and go 'that shit was terrible. Never. I'm incredibly proud of my legacy. But sometimes your legacy can be your prison. If you are an artist, you wanna be a repository, you wanna tell people stories, you want to keep telling stories of your people. and people go, 'no, man, that's not Tumi, you can't talk about bad bitches, about getting money, hustling, things that motivate people to do whatever it is they do.' But I just wanna tell people stories, and that's what Stogie T is about. And that's what we mean when we say, 'honey and pain.' We mean to be able to give you beauty and ugly. You can be the judge."

The MC also paid homage to the late HHP by performing Jabba's "Ancestors" from his 2009 Dumela.

Below are some photos taken during the show and others during the rehearsal. The show was musically directed by SA jazz maestro Thandi Ntuli (she dropped a fire album this year, too).

Thandi Ntuli was the musical director and selfie taker. Photo by Sabelo Mkhabela.

Honey and Pain is out now. Download/ stream it here.