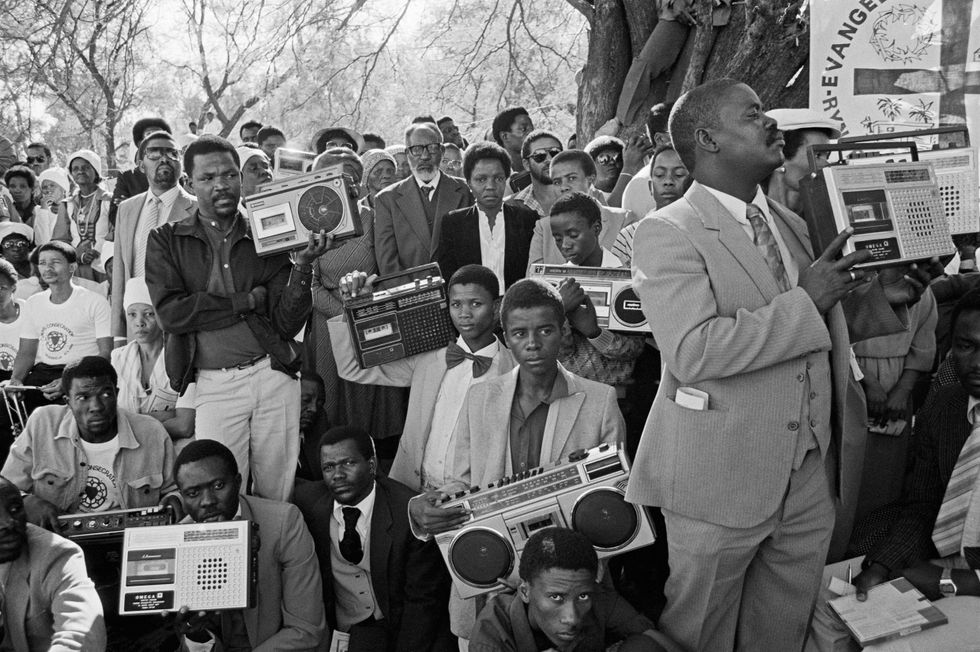 The photo exhibition, showing at the Brunei Gallery in London, highlights artists from Namibia's underground scene between 1950-1980, a time of immense musical suppression prior to its independence.

Before its independence in 1990, a whole generation of Namibians were made to believe that their country had no real musical legacy. Popular productions by Namibian artists from previous eras were systematically concealed from the masses for nearly 30 years under the apartheid regime—which extended to the country from South Africa following German colonization—depriving many Namibians of the opportunity to connect with their own musical heritage.

"Imagine you had never known about the musical riches of your country," said the exhibit's curator Aino Moongo in a statement of purpose on SOAS' site. "Your ears had been used to nothing but the dull sounds of the country's former occupants and the blaring church and propaganda songs that were sold to you as your country's musical legacy. Until all at once, a magnitude of unknown sounds, melodies and songs appear. This sound, that roots your culture to the musical influences of jazz, blues and pop from around the world, is unique, yet familiar. It revives memories of bygone days, recites the history of your homeland and enables you for the first time to experience the emotions, joys and pains of your ancestors."

The 'Stolen Moments" project began in 2010 in an effort to champion Namibia's unsung musical innovators. For the collection, Moongo and Assistant Curator, Siegrun Salmanian—along with a group of international scholars, artists, photographers and filmmakers—curated a large-scale photo exhibit that also features a 120-minute video projection, focusing on the dance styles of the era, along with listening stations, a sound installation that features "100-hours of interviews with musicians and contemporary witnesses," and displays of record covers and memorabilia from the period between 1950-1980.

The musicians highlighted, produced work that spanned a number of genres—a marker of the country's vast and eclectic underground scene. Artists like the saxophonist Leyden Naftali who led a band inspired by the sounds of ragtime, and the psychedelic rock and funk of the Ugly Creatures are explored through the exhibition, which also centers bands and artists such as The Dead Wood, The Rocking Kwela Boys, Children of Pluto and more.

"There are many reasons why you've never heard this music before," Moongo continues. "It was censored, suppressed, prohibited and made almost impossible to listen to. Its creators are either long gone or have given up on music making, by reasons of adversity, death and despair. And yet this beautiful music exists with a liveliness, as if it had never stopped playing. It is still in the minds of the few who can remember, with the ones who played it, and on those rare recordings that have survived in archives and record collections scattered around the globe. Allow me to share these stolen moments with you."

"Stolen Moments" is now showing at the Brunei Gallery in London and runs through Sept 21.