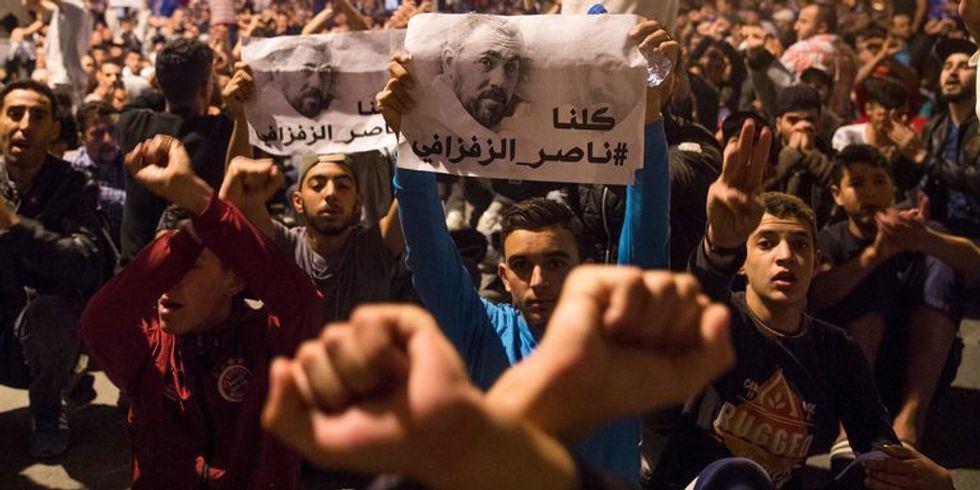 Stay on top of the news coming from the continent.

Morocco Cracks Down on Protestors After Months of Unrest

According to Moroccan human rights organizations, police have arrested up to 70 people connected to the protest movement in the ethnically Berber region of Rif. The protests, which began as a call for justice after a fishmonger, protesting the seizure of his fish, was crushed to death by a garbage truck snowballed into a greater movement demanding jobs and economic development in a region that has long felt marginalized. Despite many of the leaders having been arrested, crowds continue to protest every night in the city of Al-Hoceima

It might be nothing, but in the current climate of intrigue around the health of Nigerian President Muhammadu Buhari the first lady flying to England to be by her husband's side inevitably sparks rumors about a possible turn for the worse. Earlier this year, Buhari spent seven weeks on medical leave mostly out of sight sparking intense speculation. He returned to England on May 7th for a "follow-up" and has been there ever since.

While Buhari received medical attention in England, Angola's 74 year-old President Jose Eduardo dos Santos was in Spain receiving care for what some in Angolan media reported as a stroke. Rumors of his death were enough to prompt his daughter, Isabel to publicly deny that he had died while in Spain. On Monday, Angola's Foreign Minister Georges Chikoti told RFI,

"You know that there are moments in everyone's lives when we don't feel well. But he is fine. He is in Spain but when he is better he will return."

Dos Santos has been President of Angola for 38 years won't be contesting an upcoming election in August suggesting a transfer of power to his chosen successor Defence Minister Joao Lourenco.

On Monday, the Congolese government approved a vaccine to help combat an ongoing Ebola virus outbreak in Northeastern Congo. Developed after the devastating West African outbreak of the hemorrhagic fever in 2015 that killed 11,000 people, the vaccine has been shown to be quite effective at preventing transmission of the virus during trials in Guinea according to prestigious medical journal, The Lancet.