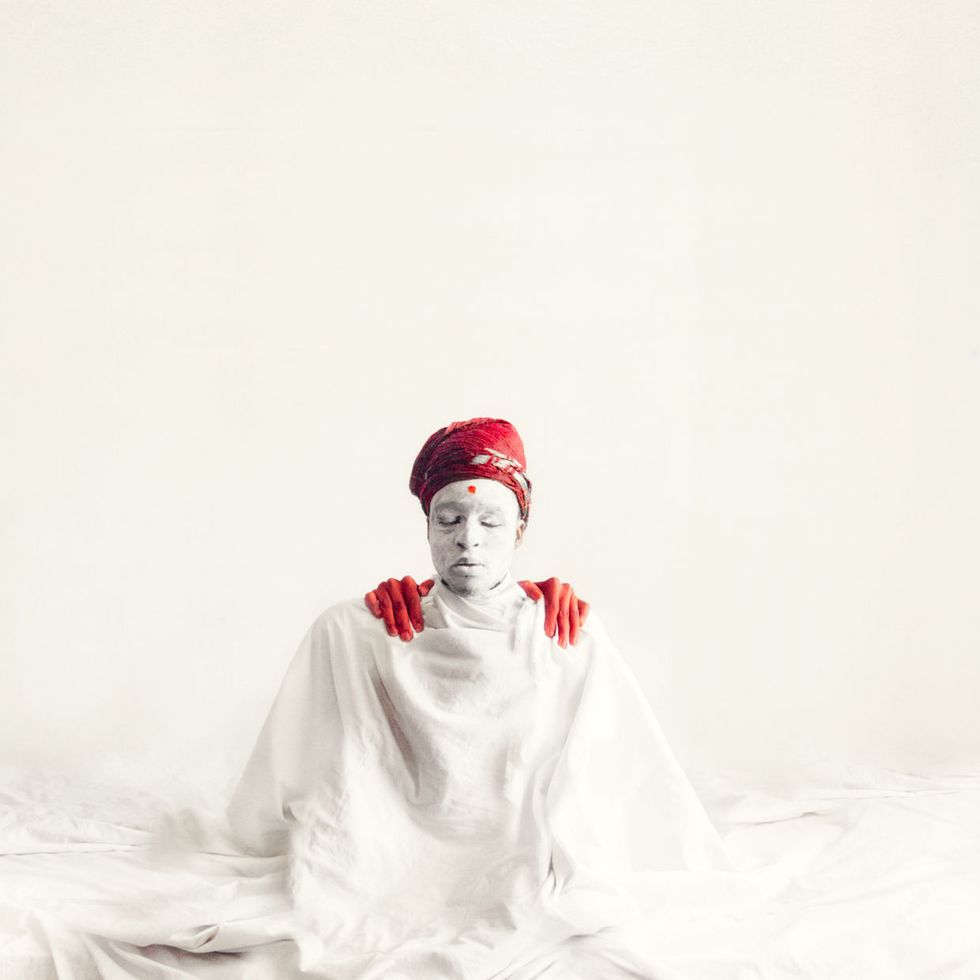 South African photographer Tsoku Maela talks his new solo show, 'Barongwa: I am that I am,' at 99 Loop in Cape Town.

Cape Town-based visual artist Tsoku Maela uses photography as a medium for channeling his dreams. A necessary albeit reluctant voice in contemporary African art, Maela’s double consciousness comes across in the unashamed ways in which he shares his art.

One of his earlier self-portraits, "Rediscover Not Recreate" (Abstract Peaces, 2014), can be seen on a wall near the De Waal Drive highway, so as to reach those who may not have access to the exclusionary and elite gallery spaces he simultaneously occupies.

Maela’s art has touched on the highly relevant and often neglected issues of mental illness in Black communities, interpersonal relationships and the pitfalls of capitalism in postcolonial Africa–all magnified through a lens of spirituality and selfhood. Maela’s compassioante interpretation and manifestation of these issues has garnered his work much praise and recognition over the past few years, but there is definitely more to this celestial creative.

His latest body of work, Barongwa: I am that I am, tugs at the thread of Sepedi spirituality through a series of five poignant images. By tapping into forms of embodied indigenous knowledge, the images trace a journey to self-actualisation.

“To know yourself is to know the very fabric of the universe,” Maela says of the show, his second solo exhibition at 99 Loop in Cape Town. “That knowledge is passed down by those who came before and watch over us. They are neither man, nor are they God. They are neither here, nor there. They are the guardians or, as we know them, Barongwa.”

We sat down with Maela in the green space of 99 Loop on the opening night of Barongwa.

Where were you when Barongwa was first conceived?

Barongwa felt like a life-long project, something that was always meant to happen on this journey of self-discovery. I didn’t think I’d shoot anything after this project; it felt like the final frontier in the stories I’ve been telling thus far: Abstract Peaces, studying the mental aspect of the subject, Broken Things, challenging the view of the self and duality of the subject, Fuck Coca-cola, eat fruits, commenting on an increasingly materialistic society using the analogy of Eve in the Garden and the product as the forbidden fruit.

Barongwa ties all of these in but on a more in-depth spiritual level where I challenge everything we have been taught of our existence since the beginning of time while questioning our true purpose on this planet. Now the question remains in the hands of the audience: “Where to from here? Who are we really?”

If you don’t believe that, look around you. The world is waking up and as a result, mass protests are taking place.

How old were you when you had your first dream about your ancestors?

Can’t really say. They come in so many different forms. Sometimes a dream looks normal until you connect the dots and realise that the message was divine. My sister and I were actually laughing about it the other day because I haven’t been in proper REM sleep for the longest time, when it used to happen so regularly.

Now I don’t need to sleep to dream anymore, my connection with that frequency has grown so much through constant creation that I can hear with the same clarity in my waking life as I do in my sleep. Thought I was losing my mind at first, but it takes a lot of trust and patience to discern and filter through the worldly noise. Starting to realise that dreams aren’t just astral projections of our imagination but a reality at a different frequency on our plane of existence that we access when our subconscious is allowed to roam freely devoid of fear.

Do you dream in technicolor, monochrome or animation?

I actually read that depending on the way you consumed media/film in your childhood, your dreams will imitate that medium chromatically. So if you grew up on black and white television, you are most likely to dream in monochrome. My dreams are in color, monochrome and animation. But also, none of the above if you understand. The repressed subconscious interprets colour differently from the human eye and takes all forms of existence into consideration.

For example, I’ve never really seen shadows in my dreams–that may sound like a nothing statement because in the “real” world shadows are inanimate objects but in the surreal realm everything is alive, so shadows would have to be accounted for as an entity with its own existence. It would have to be significant to the story somehow. Anyway, that’s just nerd talk but it’s definitely a combination of all three.

Do you perceive art as a spiritual healing practice for the Black artist?

For any artist. Creative energy is the most common and most misunderstood form of energy. It manifests itself physically and multiplies. But once that stream opens up, anything is possible, the good and the bad. But you see, creativity is then not a physical act–if the body was the orchestra then creative energy is the conductor. There’s a word for it. It’s called meditation. To be both secure and vulnerable in the face of the unknown. This is the reason creating will always be our greatest gift. Man has been creating since they were created in the image of the creator. Today the world is experiencing some tumultuous times and you know which platform is popping off the most? The platform that always pops off when any civilization is facing its most difficult times?

Let that sink in.

Abstract Peaces and Barongwa seem to overlap in terms of dealing with interpersonal and cosmic battles. How true is this for you?

Traditional healers have ubizo (the calling) to heal people, something that is a different side of the same coin as creating. That’s my calling, to create. To speak to people through my work. Not to heal with the earth. But just like ubizo, accepting the creative calling isn’t a smooth sail, it has its challenges and more often than not you may exhibit symptoms of mental conditions and get diagnosed with one as I was. But the more I grew into understating that relationship with my muse and started walking this path, with a lot of guidance, I’m starting to understand that the bipolar episodes were me coming to grips with the calling because in truth I have never been happier since I started creating. But the experience is as real as the work it inspired. That’s the correlation between the two bodies of work.

What are some of the things you've learned in the year since your previous solo exhibition, Broken Things, at 99 Loop?

It’s so easy to get caught up in the hype as a young creative. In my first year as a photographer I had two group exhibitions and a solo. Featured on CNN and numerous publications and suddenly everyone wants to be my friend or seen with me based on all of that. What does it all mean though? If you constantly have to be in people’s faces to remain relevant, are you really relevant? The biggest lesson for sure has to be that I don’t create for recognition or for galleries. Not for likes or Instagram followers. I create because there are stories to be told. So when you strip away all the expectations, all the noise, all the fake friends around you, money etcetera, what really remains is the work. That keeps me alive and I will keep on creating not only the work, but a platform for it to exist and reach the people it’s supposed to.

Tsoku Maela, Creation of man, Barongwa: I am that I am

What are your connections to the people featured in your new body of work?

I’m very picky about who I work with on a project, this much is true. If I was a musician I’d probably drop albums with no features and leave a spot for that one artist that I love wholeheartedly. A lot of photographers capture the human, the eyes, form, aesthetic, but I’m drawn to you. The real you. The soul. That’s why I can’t really pose models, it’s in the moment. Barongwa was slightly different because I stepped out of that moment and created it with people that I felt were brought to me to work with. Theodore [Afrika] and I have worked on several projects together and are good friends. Laverne [HippKhoi Maart] and Meegan [Mitchell] were God’s gift. They were not models on this shoot, they became the very subject I was trying to capture. We’d never met prior to that.

What upcoming work do you have to share with us?

I’ll probably disappear for a little bit. Or for a while. It’s been two years of solid shooting and creating on the photography medium. I know my seasons.

I’m really excited though to be working with aKomanet out in the U.S. on a project called ‘Amplify’ where I’ll be mentoring 25 young photographers across Africa. So that should give me some time for introspection and maybe inspire a few creators to go out there and express themselves without limitation.

But I have an idea of where I’d like to venture into next. Really excited about that.

Barongwa: I am that I am is on view at 99 Loop in Cape Town through September 23.

Tsoku Maela, The Anointing, Barongwa: I am that I am

Tsoku Maela, The Mothers, Barongwa: I am that I am

Tsoku Maela, The Three, Barongwa: I am that I am