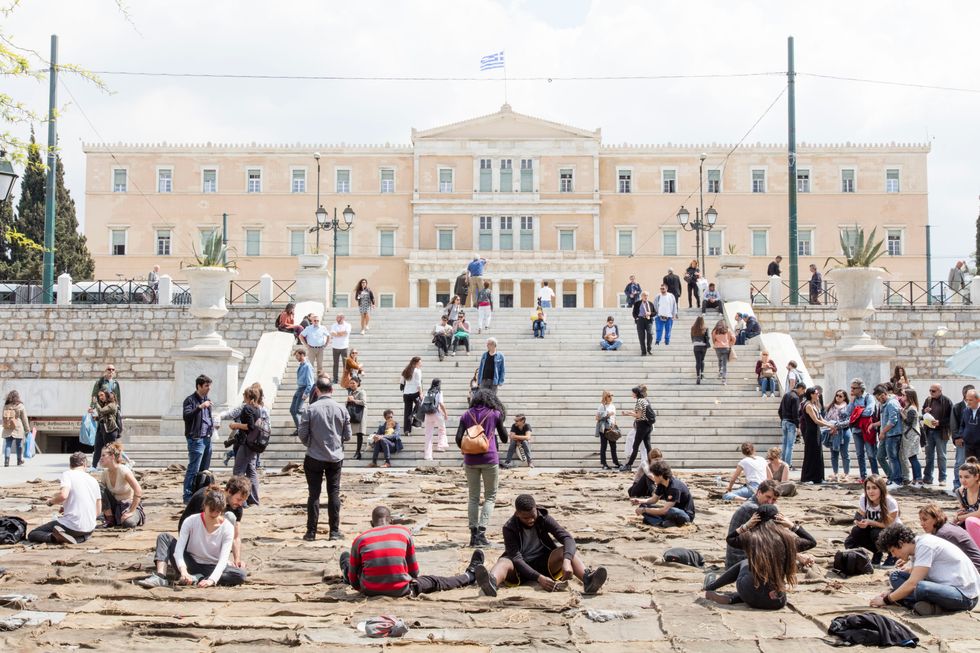 Editors Note: OkayAfrica’s UK correspondent Sabo Kpade gets deep with Ibrahim Mahama for our first edition of Sunday Reading. This is part 3 of 4. Read Part 1 here and Part 2 here.

On "Exchange Exchanger" and the wall of birth certificates

LONDON—In the video installation "Exchange Exchanger" a group of women are shown stitching up jute sacks, while another group of men pull the huge mass from the ground to the roof of Ghana’s National Theatre.

In another scene, both men and women are shown doing the tricky and surely tasking work of pulling the sacks up the many flights of stairs to the rooftop. Seeing men and women exert themselves in concert and over menial work unrestricted along gender lines is a powerful image to behold even (or especially) in 2017.

The scenes on the staircase are strongly reminiscent of those in Frammartino’s Le Quattro Volte depicting a communal effort to cut down a tree in a forest which is taken to a village square of sorts, and where it is loaded with unidentified giveaways, erected again and allowed to fall down, disbursing its goodies around which locals clamour.

Le Quattro Volte is about the four realms of life—human, animal, plant and mineral—as posited by Pythagoras. Common everyday occurrences like giving birth or cutting down a tree are experienced in isolation, and as a result their crucial importance to cycle of life are heightened.

Mahama is his own director of photography. Some of the shots in Exchange Exchanger are close ups, but others are that of an aerial view - of the work done on the National Theatre but also of parts of Accra - all of which Mahama shot himself using a drone cam which he taught himself how to fly.

OkayAfrica: You’ve also taken over a defunct paint factory where most of the boxes were broken down and reassembled. Tell me more about this.

Ibrahim Mahama: I’ve been very much interested in bureaucratic systems over these years. What I did was that I started collecting parts of furniture, walls, and other things that existed within factories, bureaucratic systems, offices within ministries and other things within Ghana. Just like the sacks, these objects hold memory and history. The interpretation is important.

How did you achieve this?

IM: I went to an old factory in Accra that was created by Kwame Nkrumah. A lot of archives from the factory was just there, left to rot. Most of the machinery  that were used in mixing the paints, had all been sold. Some of the boxes that you see in the exhibition, are fragments coming directly from these spaces. It allows us to expand the notion of what a box might be, both theoretically and experientially.

There's also a tall wall of birth certificates. Whose are they?

IM: The birth certificates are mostly of collaborators or people that I’ve worked with, or people who have somehow influenced the work one way or the other.

What was the thinking behind this?

IM: It’s kind of a memorial piece of having to dedicate the work to the people who have made my practice possible. I somehow thought it was important to transfer this idea of the birth certificates into the archival material, because they were manifestations of solar activities around the globe that were made within the late 50’s and early 60’s. The maps cover major cities around the world excluding the continent. I thought it was somehow important to layer these birth certificates onto them. It creates another understanding of these objects and establishes new relations which didn’t exist before.