#SwaziJustice: A Tipping Point For Africa's Most Quietly Repressive Nation 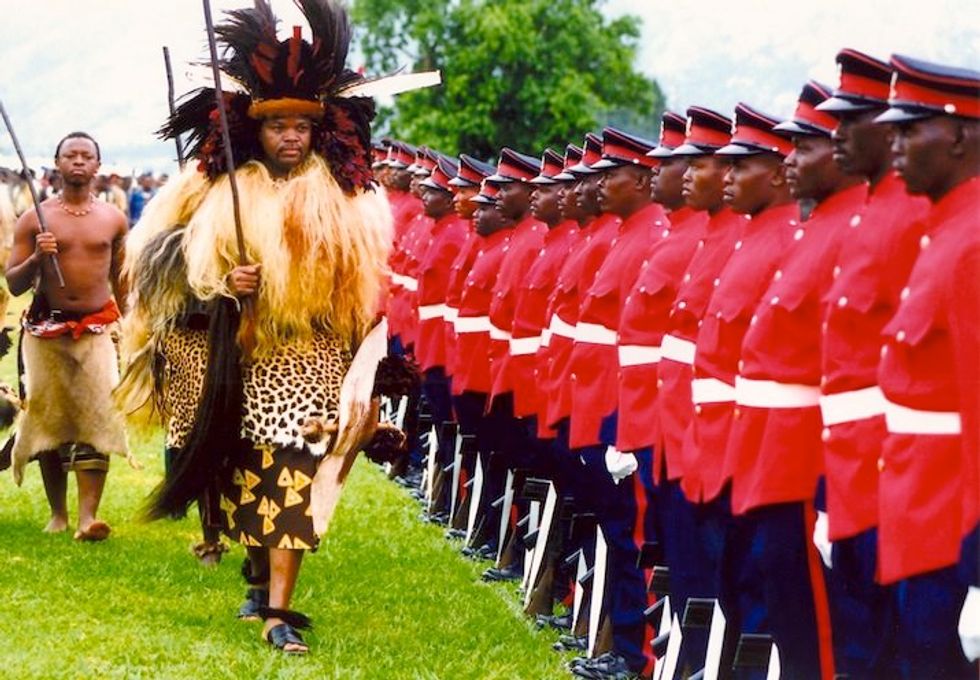 The #SwaziJustice campaign and the case of Thulani Maseko and Bheki Makhubu is a tipping point for Africa's most quietly repressive nation.

By Jeffrey Smith & an anonymous co-author

Normally when your government tries to take away your home, get you fired from your job, and throw you into prison, you’d first seek out a good lawyer and then contact the media to help tell your story. But in the case of human rights lawyer Thulani Maseko and journalist Bheki Makhubu, they were that good lawyer and that good journalist. The two published articles in The Nation, a magazine in Swaziland, in which they criticized the country’s lack of judicial independence. They now face two years in prison for contempt of court for co-authoring articles that were critical of Swaziland’s chief justice.

The case against Thulani and Bheki is a potential tipping point for Swaziland, one of the most quietly repressive countries on the African continent. At stake is nothing less than safeguarding human rights in the country for a generation.

Authorities in Swaziland desperately wish to be seen as an enclave of “traditional African values” where the benign King Mswati III rules over an adoring nation whose cultural and spiritual lives revolve around the royal family. The country, the smallest in the southern hemisphere, rarely receives international attention, the only recent stir occurring when several human rights activists (this author included) called out the singer Erykah Badu, for performing for the King on his birthday.

Tucked away in the mountains between South Africa and Mozambique, however, serious trouble is brewing. Behind a carefully crafted facade of happy obedience lies the reality of a people who know that the penalties of dissent and criticism can be severe, brutal, and sometimes deadly. The country’s longtime monarch has increasingly and brazenly cracked down on human rights, capitalizing on a state of emergency that was declared in 1973 by his father, King Sobhuza II, which banned public protests and political parties, later deeming the main opposition movement a “terrorist organization.” Since replacing his father in 1986, King Mswati’s absolute authority has enabled him to lock up political opponents and activists without challenge. He has shut down newspapers, banned trade unions, and instilled in the people a widespread culture of fear that pervades every conceivable arena of Swazi society. King Mswati has also presided over the world’s worst HIV/AIDS epidemic, resulting in a shockingly low life expectancy rate.

In order to better understand the dire situation faced by ordinary citizens, it is time for a short and necessary diversion into Swazi culture.

Swaziland has two systems of power. The one most foreigners recognize has elections that are nonviolent, established laws, a parliament, independent judges, and a cabinet. In this way, Swaziland puts on a pretty good game face, and local authorities have become experts at this sort of deception.

The true system of power in Swaziland, however, is one in which King Mswati, his family, and a court of advisers called the labadzala (“the faceless ones”) issue orders that keep them rich and powerful. While the king is reportedly worth $200 million – enjoying a fleet of German limousines, a DC-9 jet aircraft, and foreign bank accounts estimated to be worth billions – a majority of his subjects survive on less than $2 a day.

The King and his cronies control the country with nothing short of an iron fist. Mswati is head of Swaziland’s armed forces, the police, and prisons. The King cannot be sued in court and does not pay taxes on his massive wealth. He holds a quasi-spiritual authority that operates through an entrenched system of over 300 chiefdoms spread across the country, allowing for strict surveillance and management of the people.

Get caught out of line at home, or wrongly accused of sullying the kingdom abroad, and you can rest assured that you’ll hear from your local chief. Recently in August, Swaziland’s Prime Minister, who is appointed by the King, promised to "strangle" and direct local chiefs to "deal with" two activists and their families upon returning home from the United States because of their participation at the U.S.-Africa Leaders Summit in Washington, DC.

After years of pressure the King approved a new constitution in 2005, but it did not change the reality on the ground, although its Bill of Rights claimed “fundamental rights and freedoms of all.” On the surface, one would think that a Bill of Rights is a good thing for a human rights lawyer and investigative journalist. But indeed, this is where the problems for Thulani and Bheki start.

In Swaziland, it is the power that operates beneath the surface that truly matters. The reality is that the constitution and Bill of Rights were merely designed to preserve the absolute power of the Swazi royal family.

After a surprise judgment in 2008, in which a High Court judge threw out a terrorism case against one of the King’s most persistent and vocal critics, Mswati came to the realization that his carefully crafted constitution would only protect his power if judges were less independent. Upon realizing this, Mswati filled the vacant post of Chief Justice with a judge from Lesotho, Michael Ramodipedi. The new chief justice was offered a lucrative short-term contract that included free housing in a five star hotel, armed police escorts, as well as a car and driver, and the ability to remain as a judge in Lesotho and Botswana as well.

Ramodipedi’s mandate from the King was clear: ensure that those in power never lose an important court case again. Ramodipedi has since used every trick in the book, including appointing judges to important cases who are known for their pro-government bias. Appointed judges who have been openly hostile to human rights lawyers, including Thulani Maseko, and have often dismissed cases on irrelevant technicalities. When these and other dubious judicial maneuvers have failed, judges have used bizarre legal reasoning to get their way, like when Judge J.G P.A Magid from Swaziland’s High Court said that “democracy, like beauty, is in the eye of the beholder.”

Ramodipedi’s tactics have been so successful that he has managed to lose only once during his tenure as chief justice, a case in which authorities attempted to prevent women from owning land in their own name. For his vigilant efforts, including the sacking of the country’s most able and respected judge, Ramodipedi was last year awarded Swaziland’s Order of Merit.

And then there was the case of a government transport inspector who questioned a judge and her driver about whether they were using an official government car to visit her child’s school (they were not). In a fit of blind fury, Ramodipedi had the inspector arrested, charged with contempt of court, and jailed. The inspector was denied access to an attorney and the hearing violated a wide range of international legal standards.

This is where Thulani and Bheki come in. The two men, both prominent figures within domestic and international civil society circles, wrote articles that critically analyzed the inspector’s case, as well as its broader implications for the rule of law and human rights in Swaziland. They too were then arrested, charged with contempt of court and convicted by a close friend and associate of Ramodipedi, a junior prosecutor who had only served two years as a lawyer, not the ten years which Swaziland’s constitution requires.

Bheki and Thulani’s imprisonment – now amounting to 215 days behind bars – attacks the two most fundamental freedoms that any functioning democracy must have: the just rule of law and a free press. In the end, this saga is not about Chief Justice Ramodipedi. For when he ultimately goes, worse may follow him in the form of another hired henchman. The Swazi system, presided over and maintained by an increasingly authoritarian monarch, will remain brutal, broken, and wholly corrupt. Political activists will continue to be harassed and the security forces will bully, beat, and kill citizens with impunity. The media will remain heavily censored and pastors will still get warned when their sermons become “too political.” Women will continue to be treated as second-class citizens and the King and his family will get even richer, while ordinary Swazis go to bed and wake up hungry.

Bheki and Thulani’s appeal begins in Swaziland on Monday, November 3. In order to raise awareness, an international coalition comprised of the American Bar Association, the Center for Human Rights and Humanitarian Law at American University, the Robert F. Kennedy Center for Justice and Human Rights (my own organization), and Swaziland Lawyers for Human Rights, are working to raise awareness of their plight and ultimately free them under the campaign #SwaziJustice.

To be sure, this campaign is about much more than one case of two imprisoned human rights defenders. It is about the right of citizens to be given the chance to live under fair laws and to speak without fear of deadly reprisal.

King Mswati III has expertly hidden in the shadows of other African dictators for nearly three decades, but as democracy marches forward – albeit unsteadily at times – across the continent, his brutal regime is now getting the negative publicity it rightly deserves. The King, his family, and his cohorts care deeply about international perceptions of their country. And with enough support and international attention, Swazis can finally begin to build a country that respects both its rich traditions and the basic human rights of its people.

Jeffrey Smith is the Senior Program Officer at the Robert F. Kennedy Center for Justice and Human Rights. Follow him at @Smith_RFKennedy.

The co-author wishes to remain anonymous because of potential reprisals against him.