Swaziland: Women Rise For A Culture of Equal Rights 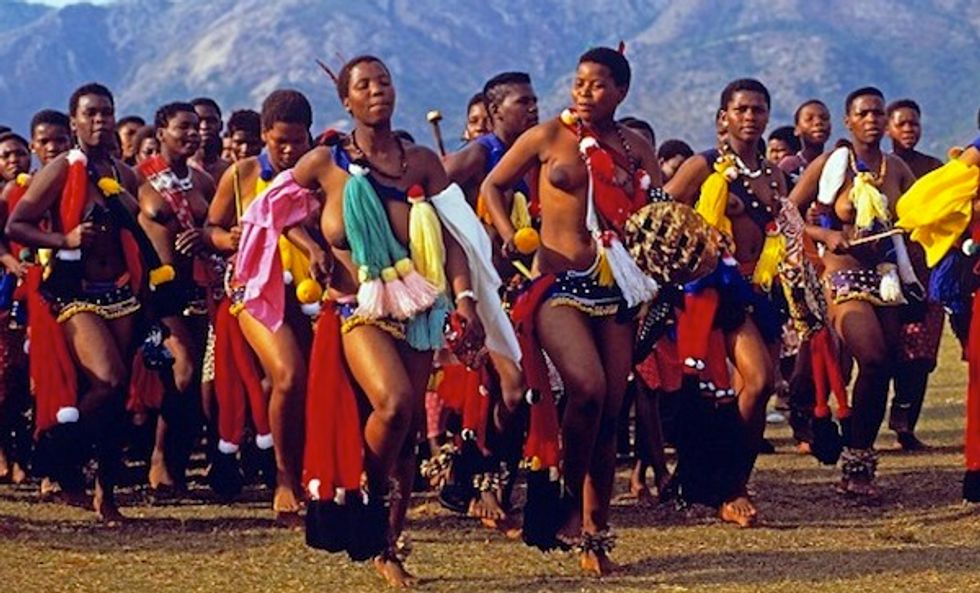 Alleged ban of miniskirts raises issues about the policing of Swaziland women's bodies and the failure of many governments to address equal rights.

When the Swazi Times ran the front page story “Miniskirts Illegal" one week after a medical student was gang-raped in New Delhi, India, the Southern African publication did more than add to its archive of absurd headlines. The Times of Swaziland is known to publish sensationalist stories (one of which recently resulted in understandable outrage and an online petition against the newspaper).

Local news of the alleged ban of miniskirts in Swaziland exploded on global media sites such as the BBC, Al Jazeera and The Indian Express. The story of the control and patriarchal policing of women's bodies gained more cultural currency during the global coverage of the protests against gender violence in India.

The notion of Swazi police arresting women for wearing miniskirts while the law turns a blind eye to scantily clad women in traditional attire is significant beyond the implied double standards. The supposed “ban" began when a 1989 law was conveniently enforced after the recently launched Swaziland Young Women's Network walked the streets of Manzini to protest the prevalence of sexual harassment.

Police in Swaziland reportedly blocked the march against sexual harassment based on the fact that some members of the women's network wore miniskirts. The irony of a government halting a demonstration against gender violence was highlighted a continent away, by an Indian protestor's placard that stated, “You can get raped but not protest against rape." These are not isolated events. They are connected by invisible threads of patriarchal politics.

A week after young women marched in Swaziland, Wendy Hleta, a Royal Swaziland Police Force spokesperson explained why women should be arrested for wearing miniskirts. In her statement to the Swazi press, Hleta perpetuated the myth that women provoke rape by wearing “revealing" clothes. Hleta said, “The act of a rapist is made easy, because it would be easy to remove the half-cloth worn by the women." The media brought international attention to her sexist statement, which may have influenced a government spokesperson to later deny the existence of a miniskirt ban.

The language that Wendy Hleta used to speak about rape breeds the preposterous idea that victims are responsible for the crimes of perpetrators. This wrongfully legitimizes victim-blaming women who experience acts of violence. The fact that a woman in public office perpetuated this myth shows that patriarchy does not discriminate - a culture of rape can be accepted by individuals regardless of their sex.

This type of troubling discourse is not limited to “developing" nations such as Swaziland or India. In the USA, Todd Akin used the expression “legitimate rape," which received a powerful response from Eve Ensler, a rape survivor and author of the Vagina Monologues. The ongoing debate about the correctness of the concept of “legitimate rape" is still making headline news. Behind the discourse, the often unseen and unmentioned war against women's bodies continues.

A week after the peaceful protests for gender justice in India, another student was gang-raped in Pretoria, South Africa. The latter created no more fuss than a newspaper headline. Two weeks ago, a group of boys allegedly raped a girl in Ohio. This weekend, another gang rape reportedly took place on a bus in India. When will the women who experience reoccurring violence be seen as more than simple statistics? When will we stop allowing a global culture of rape to continue?

At a local level, some women in Swaziland have decided to arise for their rights. Cynthia Simelane, a Swazi activist has said, “It is a scandal how the authorities refuse to take women seriously when we are holding the country together." Simelane addressed the misconception that by striving for equality, women's advocacy groups in Swaziland are breaking from cultural norms. She explained that Swazi women have a long tradition of “organizing" within their traditional regiments. In this way, she unsettles the idea that there is a duality between traditional Swazi values and Western concepts of gender justice.

At a global level, Eve Ensler is calling on men and women to stand against gender violence on 14 February through her campaign One Billion Rising. Ensler has travelled from the United States to Bukavu in the DRC and New Delhi, India. She has addressed the women of Zimbabwe and she is calling on more to join her campaign. Already, people from 182 countries have committed to rise on Valentine's Day this year. If the momentum continues, perhaps “Amaanat" did not die in vain. Perhaps women in Swaziland will be free to rise, whether they wear miniskirts or not. Perhaps these moments of resistance against gender violence are taking us closer to some semblance of equality for all.