You may know Aamito Lagum from the first season of Africa's Next Top Model in 2013, where she blew away the competition in the popular reality television show. After taking the crown, she moved to New York and started walking in many of the world's biggest fashion shows. Dozens of magazine spreads, campaigns and photo shoots later and Lagum is a globally recognized face with a big following. But she's also a person deeply concerned about climate change. In 2018 she spoke at the Global Climate Action Summit bringing her experiences as a Ugandan into the discussion. This month she took part in the Global Climate Strike, meant to push leaders to deal with the crisis. We talked to Lagum about what the climate crisis means to her and how she hopes to empower fellow Ugandans on issues of climate justice.

How did you first get involved with climate change activism?

I grew up in Kampala and used to visit my grandmother in the northern part of Uganda. It was there that I started noticing the climate literally changing. It was beginning to feel hotter and hotter, there were shorter rainy seasons and a much longer dry season. I especially remember that there used to be a river near my grandma's where people would fish and get their drinking water—it was the life of the village. As time went on, the river dried up, and there's been less and less activity there. I was in Uganda this past year and travelled up north. It was so hot, worse than I've ever experienced. Activism is something I'd say I had been curious about for a long time and wanted to know more. Now that the world is talking about climate change, I feel like I can now put into words what I saw when I was growing up in Uganda—and that I see to this day.

Why is environmentalism close to your heart?

For me, it's a very personal issue. In America, there's enough to sustain us throughout the year. During the winter, we don't have to worry about whether we'll have enough food to get us through the dark cold months. But in Uganda, people are eating only one meal a day because there just isn't enough food. This isn't because they're lazy and can't work, it's because the climate is too unreliable. When the rain comes, it's too heavy that it spoils the crops. When the hot season comes it takes the crops a really long time to grow—so the harvest has a small yield and the food isn't enough to sustain them. People starve, to be honest. And when it comes to hunger, I know it's the women and children who suffer the most.

What do you think is the most pressing issue facing the continent in regards to climate change?

The continent is one of the most susceptible places on earth to climate change, at the same time we are the least responsible for the greenhouse gas emissions that have created this crisis. The biggest effect on Africa right now is the erratic weather patterns. In countries like Ethiopia, there are people who say they used to see drought every five or six years, now they say it's happening every two or three years. In the Somali region, people say the 2017 drought hasn't really ended in some areas and people are unable to recover between dry periods. At the same time, there is too much rain in Mozambique during winter months. Just this year there were violent storms like Cyclone Idai, which was literally one of the worst storms on record in that part of the continent.

Oxfam, for instance, is pushing for governments and large companies doing business in Africa to reduce their greenhouse gas emissions. But they're also working with farmers in parts of the continent to adjust their crop cycles to the changing weather patterns, even to take out loans or help build up their savings so they have a kind of buffer. I think we also have to be careful to protect some of the continent's greatest natural resources—our rivers, lakes, forests. I realize that work and new economic opportunities are important to fighting the very real and heart-breaking poverty there, but we have to also be sure to protect the nature that millions there rely on for things like fishing and even tourism. 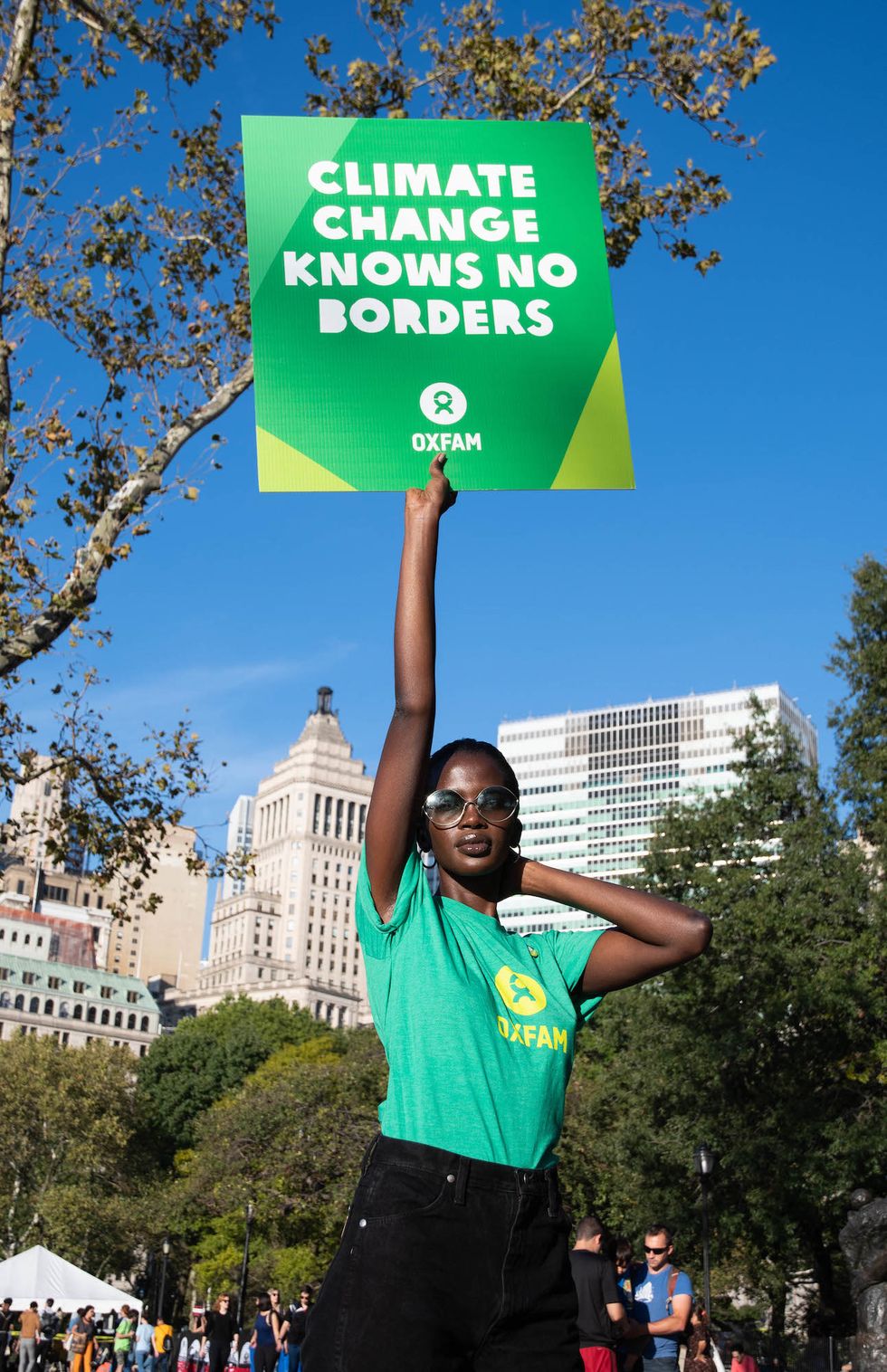 Can you talk more about the work you do with Oxfam and how it's improving happenings on the ground?

Oxfam is fantastic. When I went to Uganda with Oxfam, my main focus was on women and the work Oxfam and its partners are doing do to help women. It's the women who have the power to make change on a household level, who focus on the children and what they need to thrive. The men don't make those kinds of decisions. The work Oxfam is doing helps women make the kind of small-scale decisions that lead to big change.

One example of an Oxfam program we saw was at a refugee camp in Uganda, where women were making sanitary pads for girls who couldn't afford or access them. The girls couldn't go to school because of this. Something so basic has the potential to reduce the number of school dropouts and have a much larger impact on these girls' lives.

It's important to realize what power women in Africa have to affect long-term change. For instance, it's the women who do the cooking and decide whether to burn charcoal, firewood or briquettes. If they begin to use briquettes versus firewood, that teaches their children that firewood isn't good for the environment—briquettes are often made of recycled materials, they produce less smoke, and they don't require cutting down trees. These are the kind of simple, but important choices that kids will grow up knowing. Oxfam is empowering women so women can pass on their values and knowledge to their children, so they'll make better decisions growing up.

You work in what some would consider two very different worlds: modeling and activism. How does one inform the other for you?

I actually don't think they're two different worlds. The world is one, and everything is interconnected. Modeling provides an opportunity for activism. As a model you have to ask how do you influence people, what do you say to people to create positive change? If you've been given some sort of platform—even if it's not modeling—it's so important to ask how you can create some kind change. That's the direction we're going in. We now have a lot of access to people with just one click. We can post something and 100,000 people will see it instantaneously. It's fantastic and I feel very blessed that I'm living in this day and age.

I also see the fashion community paying lots and lots of attention to the need for more sustainable products. I know examples of denim companies that are more sustainable—they're into more sustainable fabric and more sustainable ways of running their business. Stella McCartney is always advocating for sustainability, holding people accountable, and researching how products are made. There's also an increasing amount of information on fast fashion companies which aren't sustainable or ethical. Lots of people I know no longer buy from them and are becoming more conscious. The more that people talk about these issues and become aware, is how change happens.

How do we empower people on the continent to take action against climate change in order to protect their livelihoods?

I think many of the things that happen on the continent is because people aren't aware. They don't know that years of what they've been doing will have an impact on generations after them. People coming together, getting information, spreading the word about climate change is one of the ways we can make change.

Africa is so rich in oil, minerals, and other natural resources, that many large foreign companies are looking to do business there. But there isn't lot of information about the kind of damage they can do to the environment and people's health. For instance, major mining companies on the continent create so much coal dust that it causes people to have asthma and pollutes the harvest rain water.

In Uganda, only a percentage of people own phones. So this means not many people have access to information through Facebook, and other social media channels. Most people still listen to the radio and that's not reaching people our age. So how do you get to the woman in the small village who doesn't know about these huge companies? That they are polluting the land, that the animals are dying because they're drinking polluted water from companies that are dumping waste water everywhere? I believe if they knew, they would come together, and they would hold their governments and decision-makers more accountable.

One of the things that's most important for everyone to understand is that nothing will get better unless rich countries most responsible for climate change –including the US, Germany, and the United Kingdom – reduce emissions and take serious climate action. I truly believe information is power.

The country will receive $150 Million in support of its exceptional sustainable forestry.

Gabon just made history as the first African country to receive payments for preserving its rainforests. On Sunday, Gabon signed a 10-year deal with Norway that will give the country $150 Million for their efforts at sustainable forest conservation, reduced greenhouse emissions and carbon dioxide consumption. The money will be paid as both a reward for past environmental performance and as an incentive to continue their good work.

Youth Across Africa Turn Out to Protest Climate Change

The photo series, shot in the hottest place on earth, will be showing at Somerset House in London starting this September.

Tanzanian authorities have also warned those living along the southern coast to move to safer ground ahead of the storm.

Some Kenyans are literally swimming in their homes due to severe flooding in areas of the country.

We speak with Lerato Letebele, of the climate change organization 350, about how climate change is impacting the continent, and what we can do to help fight it.