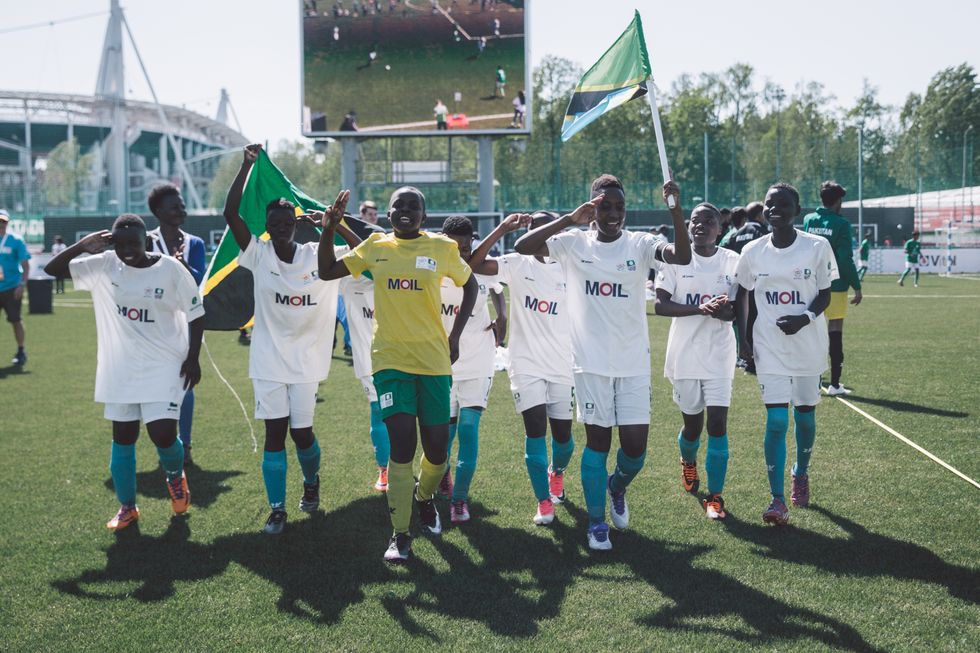 With a huge smile and surrounded by some of her new friends from 20 different countries at the Sapsan Arena in Moscow, Asteria Robert, the 14-year-old captain of the Tanzanian girls' football team, takes in the atmosphere following the final of the Street Child World Cup.

"When we left we couldn't believe we could reach this level and we're so glad we got this far in the tournament," says Asteria, after leading her team on to the podium to receive medals and a trophy for coming in second place.

The Street Child World Cup is a football tournament for children all over the world who have experienced homelessness or are considered at risk of living on the streets. It takes place before the FIFA World Cup.

After a high-octane performance with many chances at goal, the Tanzanian girls were defeated 1-0 by a team from Rio de Janeiro at the stadium—a stone's throw from Lokomotiv, home of the newly-crowned Russian Premier League champions. Some of the girls slumped on the floor at the final whistle but soon gathered themselves to show sportsmanship and congratulate the winners from Brazil

The final game was live-streamed by Goal and seen by more than 130,000 people. In the stadium the team were cheered on by teenagers from across the world, banging drums and waving the Tanzanian flag.

"Day by day, the games have been hard—from the first to the last. We've had to work really hard," says Asteria.

The girls aged 14-17 from Mwanza have become as well-known for their victory shouts of "Kilimanjaro" and "Zanzibar" as for their skills on the ball.

The girls came second in a competition of teams from Bolivia, Brazil, England, Kazakhstan, India, Mauritius, Mexico, the Philippines, Russia and the United States. In the boys' competition, teams from Burundi and Kenya have played teams from Belarus, Brazil, Egypt, Indonesia, Nepal, Pakistan, Russia, Tajikistan, Uzbekistan. Burundi made it to the semi-final, but were eventually defeated by Pakistan.

Along with more than 200 teenagers from across the world, the girls were also given the opportunity to explore Moscow, including the Kremlin and Red Square, at the 10-day event for young people at risk of the streets. And they have taken part in a cultural festival at venues across the city.

"This has been a great opportunity because apart from the football we have been able to build relationships with children from other countries, exchange ideas and share culture," says Asteria.

The team has been training hard for months with the TSC Sports Academy, which is run by the Cheka Sana Foundation, and they faced stiff competition to qualify.

"We value ourselves, we know who are and we know our worth, this which enables us to do anything we set our minds to."

Before the semi-final the girls said that winning the tournament would be extra sweet because boys from Tanzania won the last Street Child World Cup in Rio de Janeiro, in 2014, beating hosts Brazil along the way.

"We can do everything on the same level as boys. If girls are not allowed to participate in sports, it's not right, we are human beings, and we are supposed to be happy and do anything the makes us happy. we need to access all our rights."

In addition to playing, the girls said they enjoyed watching the other teams perform dances and songs during the nightly cultural showcase, known as "the late show." The girls performed a traditional dance. The event ends on Thursday, with a general assembly on children's rights in the heart of Moscow.

"I love the late show, there is so much I have learned from different countries," said Asteria. "The performance I liked best has been from India. The way they dressed, their dancing, the drums, it was amazing."

As well as playing in the girls' final, the team has been cheering on Pakistan, who were defeated on penalties to Uzbekistan in the boys' tournament. "[Pakistan] are very well behaved and are different from other boys, they are very respectful," says Paulina.

What's the secret of their success? "We value ourselves, we know who are and we know our worth, this which enables us to do anything we set our minds to. We have a good relationship with each other both on and off the pitch," says another team member, Zulfa John.

Another teammate Merabu James ads: "The secret to our success is that we understand each other and if someone is not doing well, we talk kindly to her, to help her get back on track."